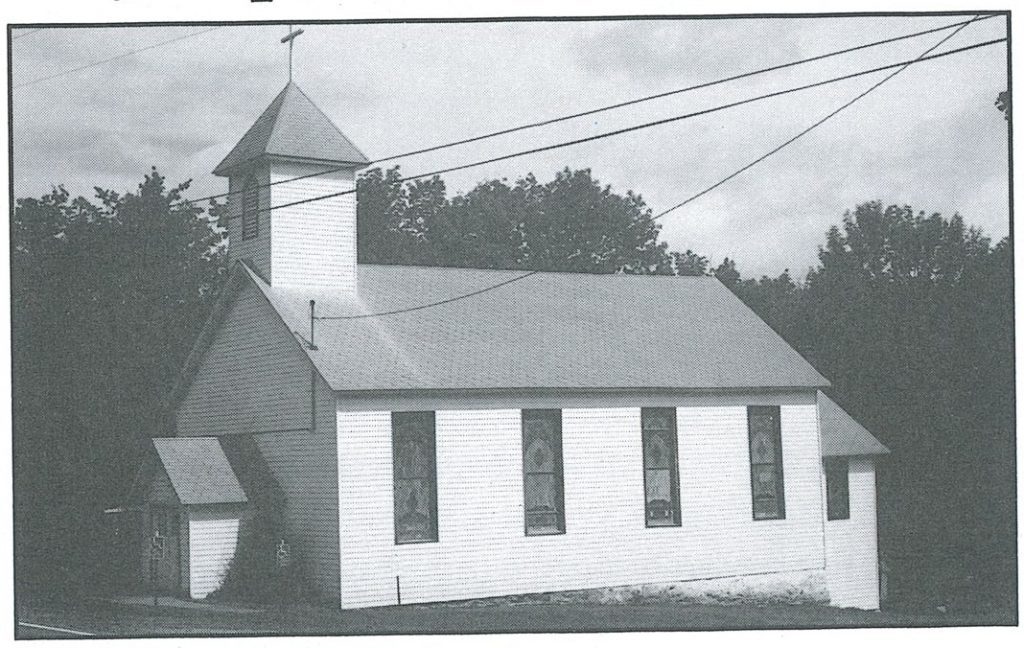 RILEYVILLE — Bishop Joseph C. Bambera will serve as principal celebrant of a Pontifical Concelebrated Mass of Thanksgiving on Sunday, Aug. 22, at 9 a.m. at Saint Joseph Church in Rileyville. The celebration marks the 150th anniversary of the mission church of Saint John the Evangelist Parish, Honesdale, where Father William Langan serves as pastor.

The sesquicentennial celebration will continue following the jubilee liturgy with a testimonial reception in the church’s social hall.

According to a written history of Saint John the Evangelist in Honesdale, compiled by Mary Heaton on the occasion of the parish’s 150th anniversary in 1992, the Church of Saint Joseph in Rileyville was established in 1871 as a mission worship site of Saint Juliana Parish at Rock Lake by the presiding pastor, Father Thomas Brehony. 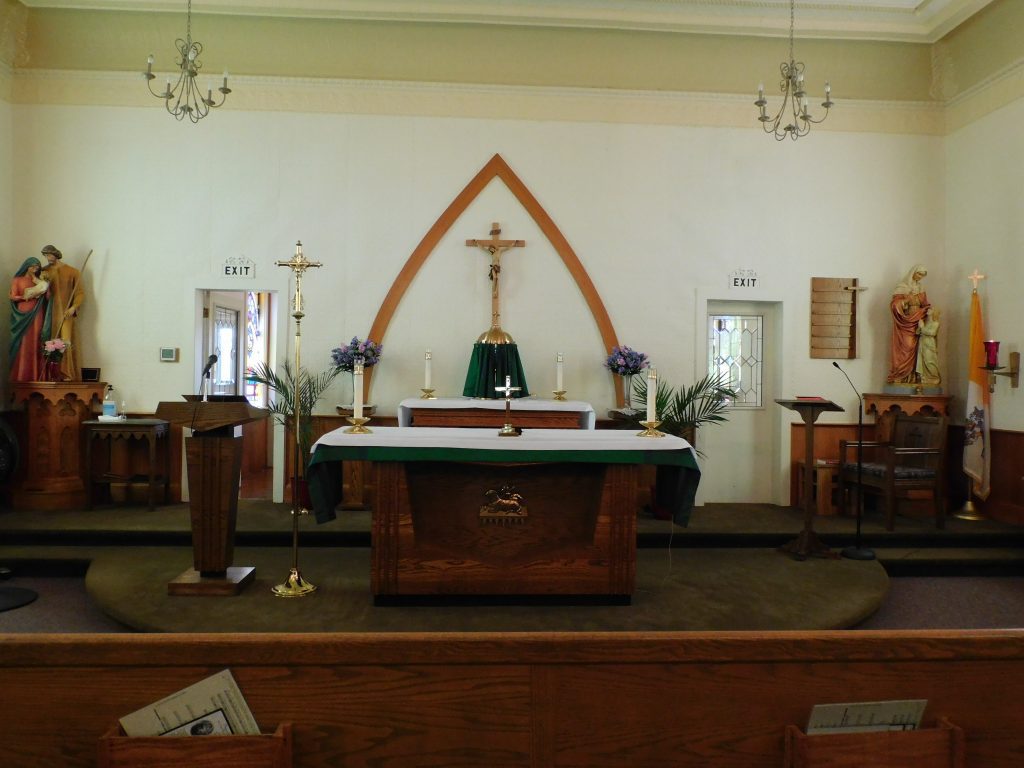 In 1944, the care of Saint Joseph’s was assumed by Saint Mary Magdalen Parish, Honesdale, with Saint John the Evangelist taking over the guardianship of the small mission church three years later.

Constructed on Wayne County farmland purchased by Isaac Dougherty, Saint Joseph’s was considered a typical white country church, with the original structure forming the body of the religious edifice. The sacristy and a partition creating a vestibule area in the front of the place of worship were later additions, as was the small front entrance.

Early years found no regularly scheduled Eucharistic celebrations scheduled at Saint Joseph’s. Word of the pastor’s arrival would spread, and parishioners would walk or travel by horseback to worship. Eventually, Mass was scheduled for the fifth Sunday of the month.

In the early 1960s, Saint Joseph’s received extensive renovations, including interior and exterior painting, replacement of the cross on the church tower, new altar and altar rails, pews, tile flooring and wainscoting. An acre of land was purchased to provide a 55-car parking lot.

The centennial celebration of Saint Joseph Church was held on Sunday, Aug. 15, 1971, with the Most Rev. J. Carroll McCormick, sixth bishop of Scranton, serving as principal celebrant. A testimonial dinner followed at the Elks Lodge in Seelyville.

In 1989, the sacristy of Saint Joseph’s was refurbished and a restroom was added. Later improvements included new sidewalks, repairs to the stained glass windows and ventilators, and new storm windows. Dedication of a new social hall situated adjacent to the church on the pastoral grounds was celebrated in 2017. 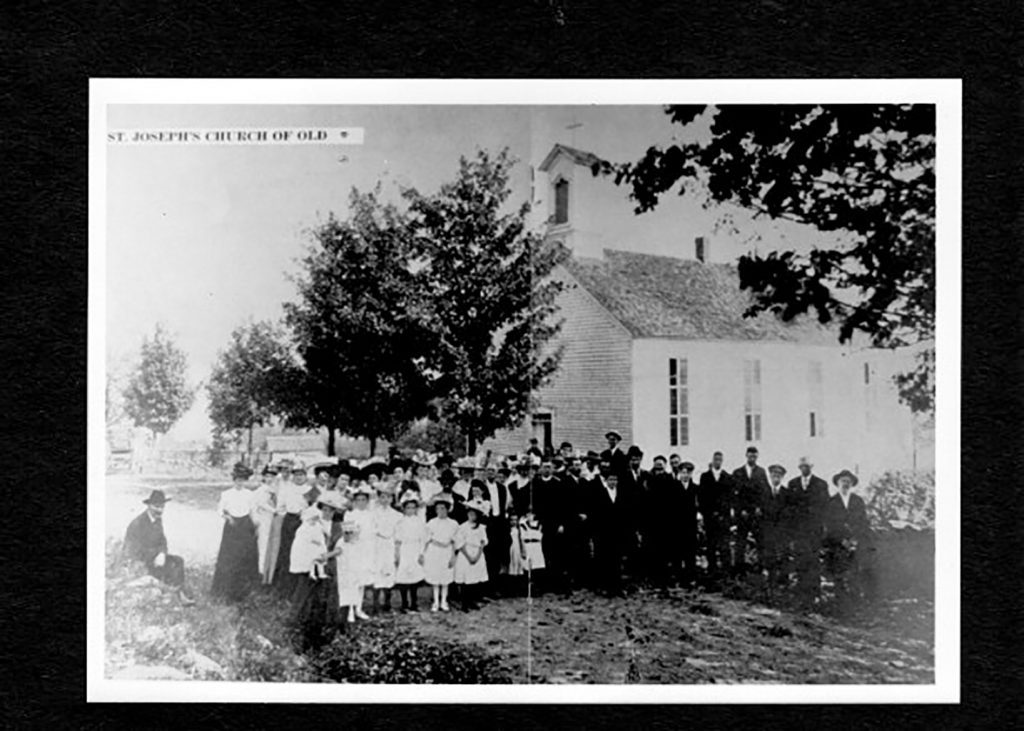 The Mission Church of Saint Joseph continues as a vital extension of Saint John the Evangelist Parish. A Sunday Mass is offered each week at 9 a.m., preceded by the Sacrament of Reconciliation.

For as long as she can remember throughout her 87 years of life, Helen Adams attended Mass at Saint Joseph Church with her family until the onset of the COVID-19 crisis. She recalled receiving her sacraments of Baptism, First Communion and Confirmation at the country church in Rileyville — the last of which was conferred upon her and one other Confirmant by Bishop William J. Hafey, fourth bishop of Scranton.

“Our son received religious education at the church with their mother as their teacher,” Adams said. “I taught classes at Saint Joseph for many, many years. Both boys were altar servers until they got taller than the priest.”

Adams reminisced how she enjoyed the various celebrations at the mission church during her lifetime, while witnessing improvements to the house of worship: from the introduction of electricity to the church, to the digging of a well to allow running water for restroom facilities, to the installation of the first heating system, to, most recently, the construction of a much-needed social hall for church functions.

“We were grateful for a shrine to our Blessed Mother at the edge of the cemetery with its beautiful hand-crafted stone grotto and very special flower garden,” she added.

The Saint Joseph parishioner explained how her family history is inextricably intertwined with that of the venerable church.

“Four Burke brothers came to the area from Ireland during the Potato Famine,” Adams noted. “One of them, Thomas, was my great grandfather. He was listed as one of the original members of the church and as one who physically helped build Saint Joseph’s.”

Adams remarked that upon entering Saint Joseph Church, the first two windows are dedicated to the Burke family and the family of her other great grandparents, Patrick and Jane Osborne. “Their son, James, married Mary ‘Mamie’ Burke in 1893,” she said.

As she looks forward with grand anticipation to the 150th anniversary of historic Saint Joseph Church, Adams remarked that each celebration and turn in the road down through the ages at the simple Catholic worship site evokes special memories — and challenges.

“When I was a child, I had Doherty girls for my religious education teachers,” Adams recollected. “When one left the area, there would be a sister to take her place,” pointing out the Doherty family included numerous children. “Now, when a church leader closes a door, there is a wonderful ‘Kathy’ or ‘Linda’ to accept responsibility. God has blessed us and the future will be bright.”