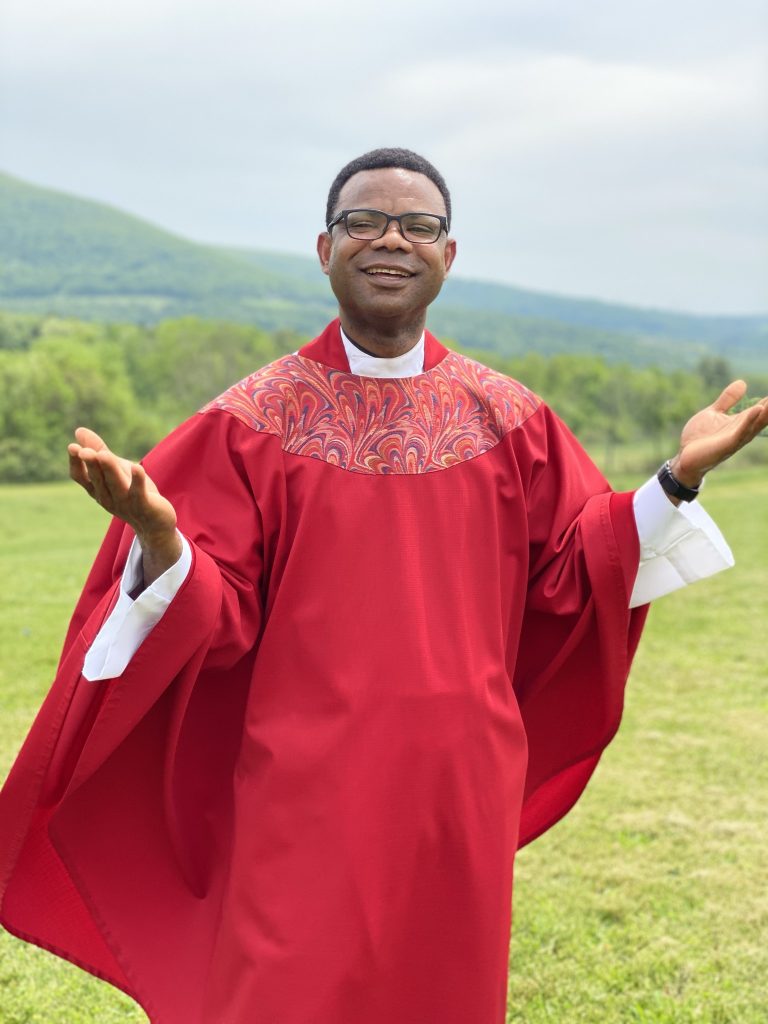 SCRANTON – Growing up in a small town in Ghana, West Africa, Father Stephen A. Asomah didn’t have a resident priest in his community to celebrate Mass every day or even every week.

“Sometimes it took several months to have a priest so our catechists would lead the services on weekdays and on Sundays with communion service,” Father Stephen said.

As the seventh of eight children, Father Stephen’s mother introduced him to the Catholic faith, taking him to church, devotions, Legion of Mary meetings and daily services.

“When the priest was visiting, it was such a great occasion and a great joy,” he explained.

Father Stephen explained his path to becoming a missionary as homilist for the World Mission Sunday Mass, which was held Oct. 31, 2021, at the Cathedral of Saint Peter in Scranton. Father Stephen has been in the United States nearly a decade. He became parochial vicar at Our Lady of the Snows Parish in

Clarks Summit in Feb. 2020 after serving seven years in the Archdiocese of New York.

“Many years ago, many of your sons and daughters made a big and loving sacrifice to go to Africa and to share the love of God they had encountered with us as missionaries. It’s time to reciprocate their love and their generous sacrifice,” he said.

Father Stephen said it was his interaction with a missionary priest, Father Michael O’Brien, which sparked his interest in the priesthood. Shockingly, Father Stephen didn’t understand English.

One day, when he was in fourth grade, Father Stephen decided to gift the missionary priest a pineapple from his family’s farm.

“Father smiled and patted (me) on the shoulder. He said, ‘God bless you to be like me,’ and that was it!” Father Stephen explained with a smile.

“Mission is born out of love. Jesus’ own mission on earth was born out of the Father’s love for the world and his desire to save humanity,” Father Stephen told the Cathedral crowd during his homily.

He explained that all Catholics are missionaries. While some missionaries travel far away from their homes, others are called to support missionary work prayerfully and financially, and everyone is encouraged to make their homes a missionary outpost.

“At the end of this Mass, when you hear, ‘go the Mass has ended,’ know that you have a mission to accomplish,” he ended his homily by saying.

At the conclusion of the World Mission Sunday Mass, the Most Reverend Joseph C. Bambera, Bishop of Scranton, thanked Father Stephen for sharing his personal story and reminding parishioners of the importance that international priests play in the Diocese of Scranton.

There are currently 12 priests from countries such as Ghana, India, Bolivia, Columbia, Peru and the Dominican Republic currently sharing the love of Christ locally.

so, so blessed and so grateful for their presence and for their willingness to help us in our parish communities.”