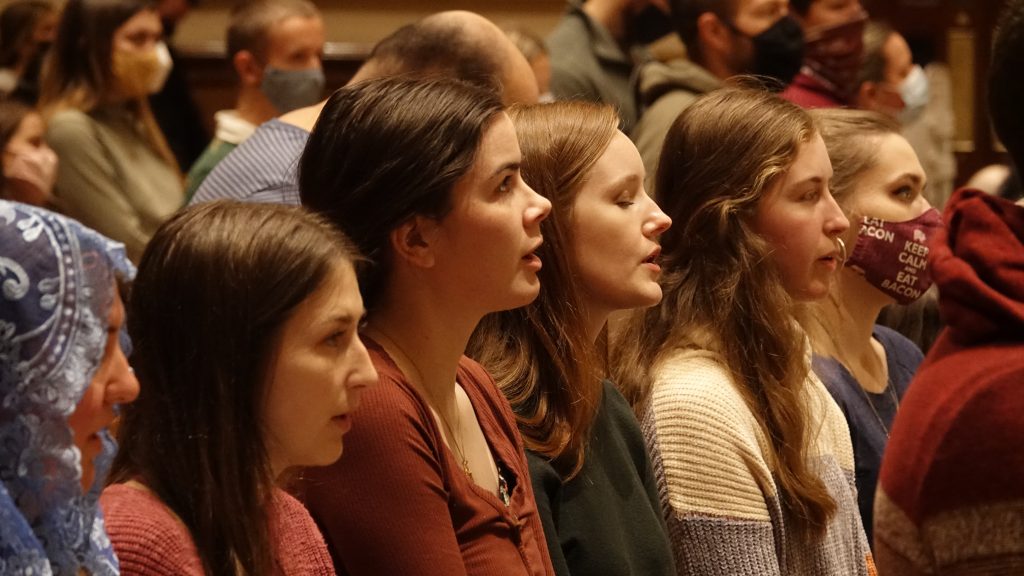 SCRANTON – Six years after its launch, the Diocese of Scranton’s annual Leave a Mark Mass is still having a strong impact on young adults.

“It is nice to see the young Church all gathered in one place,” Thomas Cunningham, 28, said.

The Scranton man and his twin brother were among those who helped plan the first Leave a Mark Mass in 2016. They have continued to serve on the planning committee and always look forward to the special liturgy.

“It fosters a community among the young Church. We may be spread out, so to speak, but we’re all one body and one Church,” Matthew Cunningham added.

The Most Reverend Joseph C. Bambera, Bishop of Scranton, served as principal celebrant for the sixth annual Leave a 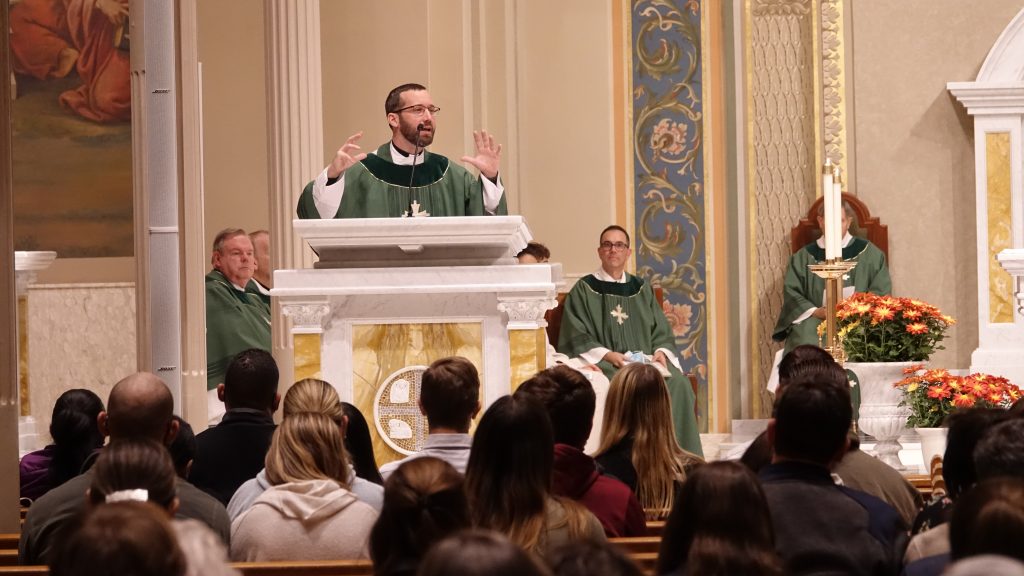 Mark Mass on Nov. 7, 2021, at the Cathedral of Saint Peter in Scranton. Father Alex Roche, Diocesan Director of Vocations and Seminarians, served as homilist.

“Leave a Mark Mass is so important for young people because it’s so inspiring,” Bridget Barnic, 25, said. “After the pandemic, it has been very refreshing to be with everyone again today and to feed off the energy of each other.”

The idea for the Leave a Mark Mass developed out of comments made by Pope Francis at World Youth Day 2016 in Krakow, Poland. The pope said young adults do not come into the world to “vegetate,” but rather to “leave a mark.” 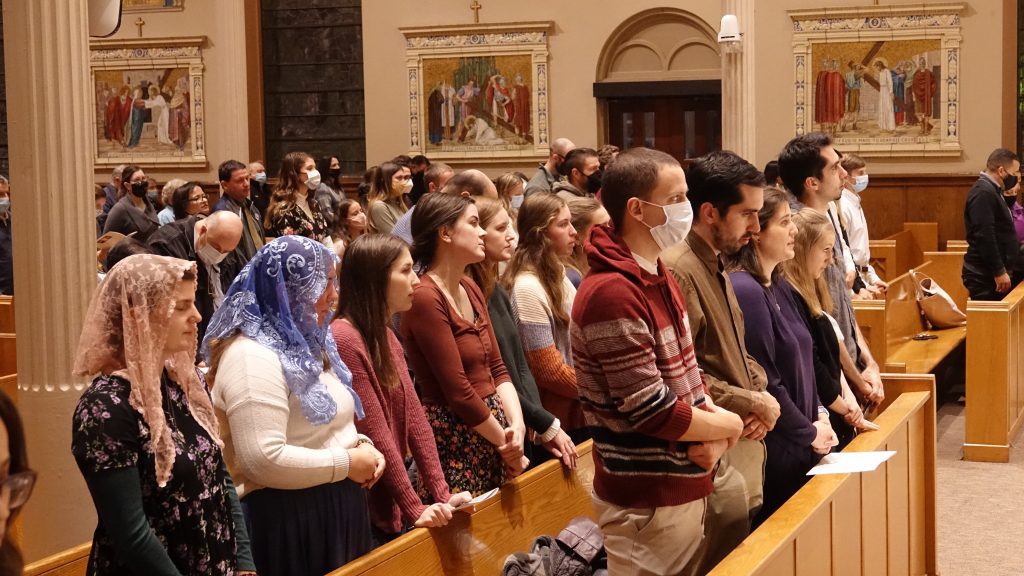 The Leave a Mark Mass helped to kick off National Vocation Awareness Week in the Diocese of Scranton. Young adults from around the diocese attended the event.

Sean Robbins, Director of Youth and College Ministry at Saint Matthew Parish in East Stroudsburg, made the trip to Scranton with a small group to participate.

“We all have a Baptismal call and we all have to participate and engage and I think that is what the Leave a Mark Mass does. It makes us realize that we’re all one, all one as a diocese, and we’re all on the same mission of spreading the Gospel,” he explained.

During his homily, Father Roche told young adults not to be timid in their faith, especially when facing big decisions in their lives.

“It is in the difficult moments and tough decisions that we should place our trust even more deeply, even more 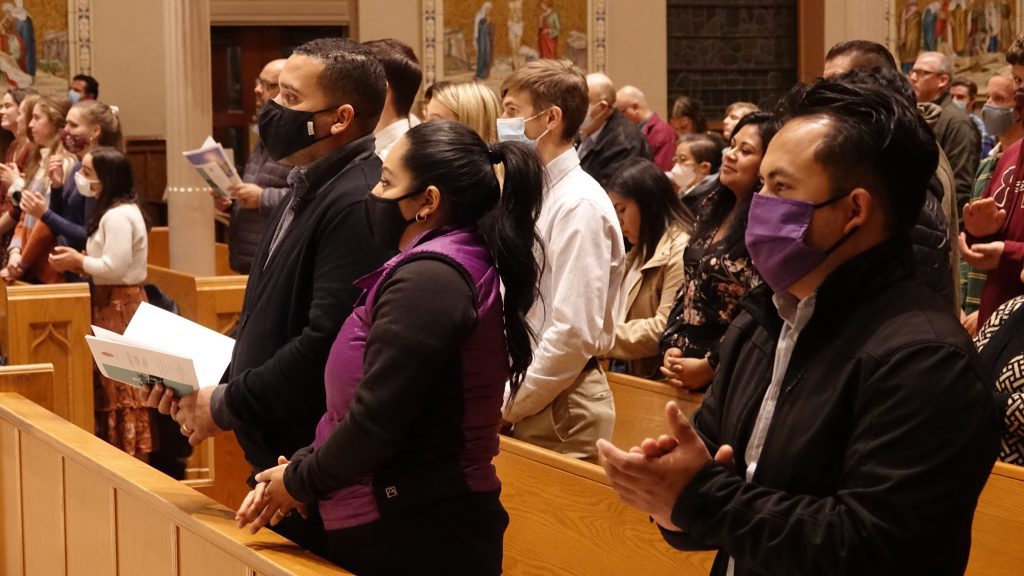 Father Roche also stressed the need to trust in the grace of God.

“Don’t be afraid to place your trust even more deeply in the path that Jesus Christ has for you,” he boldly proclaimed.

Father Roche’s homily resonated with many of the young people in the Cathedral crowd.

“It really touched me because I’m a fearful person. I try not to take big, huge leaps but as I’m getting older and more mature, it made me think about taking opportunities,” Maria Luna, 18, said.

This was the first time Luna and her friend Nancy Cortes, 28, who are both parishioners of Saint John Neumann Parish in Scranton, attended the Leave a Mark Mass. As members of the Hispanic community, they were delighted to see readings and music in both English and Spanish.

“I liked how they incorporated English and Spanish, that way the Spanish community could feel like we’re involved. Everything was beautiful,” Cortes said.

Following the Mass, the young adults were invited to a social at the Diocesan Pastoral Center. Two food trucks were set up in the parking lot, while attendees inside were able to meet one another, enjoy music from a live band and participate in games.