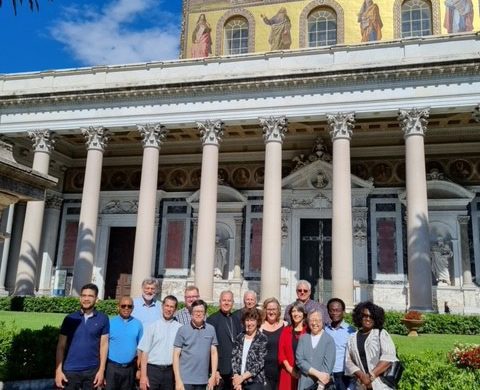 By the Most Reverend Joseph C. Bambera, Bishop of Scranton and Catholic Co-Chair

In 1964, the Fathers of the Second Vatican Council issued the Decree on Ecumenism, Unitatis Redintegratio, acknowledging that the restoration of unity among Christians was one of the Council’s principle concerns, reflecting the very prayer of Jesus himself. “What has revealed the love of God among us is that the Father has sent into the world His only-begotten Son, so that, being made man, He might by His redemption give new life to the entire human race and unify it. Before offering Himself up as a spotless victim upon the altar, Christ prayed to His Father for all who believe in Him: ‘that they all may be one; even as thou, Father, art in me, and I in thee, that they also may be one in us, so that the world may believe that thou has sent me’.”

Seven years after the publication of Unitatis Redintegratio, an agreement was reached between the Secretariat for Promoting Christian Unity of the Roman Catholic Church, some Pentecostal Churches and participants in the charismatic movement within the Protestant and Anglican Churches to enter into dialogue. This agreement set the stage for the first official meeting of the International Catholic – Pentecostal Dialogue that took place in Zurich, Switzerland in June 1972.

With its primary goal of fostering mutual respect and understanding between the Catholic Church and Classical Pentecostal leaders and churches in light of the prayer of Jesus that all may be one (Jn 17:21), the Dialogue has issued six reports throughout the course of the past fifty years, with each report reflecting a particular phase of discussion and prayer. Each phase, in turn, has generally consisted of six to seven years of dialogue on topics related to a particular theme of mutual interest and concern. Themes over the past five decades have ranged from “Evangelization, Proselytism and Common Witness” to “Becoming a Christian, Baptism and the Sacraments” to “Charisms in the Life and Mission of the Church,” among other topics.

In 2020, I was asked to serve as the Catholic co-chair of the Dialogue, working alongside my counterpart from the Pentecostal movement, the Reverend Cecil M. Robeck, Jr., who has been a member of the Dialogue for decades. Meeting in Rome in July of this year to commemorate its 50th anniversary, the Dialogue continued its work in the early stages of its 7th Phase, with the overall theme, Lex Orandi, Lex Credendi, (translated: “the law of what is prayed is the law of what is believed”). Our specific focus for this year’s Dialogue work was “Kerygma, Proclamation and the Christian Life,” with papers being prepared by both Catholic and Pentecostal participants that served as the basis for our discussion, prayer and reflection.

For me, in addition to being involved in a discipline of Church life and ministry that has great meaning personally, I felt privileged and blessed to have been given the opportunity to work with a team of outstanding academic scholars and church leaders. Not knowing what to expect as I prepared for my first experience of the Dialogue in person, following a two-year suspension of in-person meetings due to the coronavirus pandemic, the members of the Catholic team helped to make our time together both productive and meaningful through the expertise that they shared, the depth of their faith and their kind and generous spirits. My experience with the Catholic members of the Dialogue was mirrored by the Pentecostal members, each of whom approached our time together with respect, reverence, openness and faith.

As noted in the title of my reflections, the Dialogue is truly international in its composition. Currently, it consists of seven Catholic members, who represent the United States, Columbia, Italy, Nigeria (by way of Switzerland), Hong Kong and Brazil, and eight Pentecostal members, from the United States, Canada, Australia, Ghana and Peru. Thankfully, our meetings were all conducted in English. The various cultures and lands that were represented, however, all served to provide a rich and varied perspective on Church life, worship and ministry.

Our Dialogue group spent six days working together from early morning until early evening, with a break for lunch – but no time for a siesta! Yet, despite the intense schedule, we were fortunate to participate in several notable experiences, from Sunday Mass in Saint Peter’s Basilica, to Vespers at the Basilica of Saint Paul Outside the Walls, to a private tour of the Apostolic Palace, conducted by the Diocese of Scranton’s own Monsignor Christopher Washington, who is assigned to the Secretariat of State in the Vatican, to an anniversary dinner hosted in the Vatican Gardens by His Eminence, Kurt Cardinal Koch, Prefect of the Pontifical Council for Promoting Christian Unity.

By far, however, our most noteworthy experience was to receive a personal greeting from His Holiness, Pope Francis. His words capture best not only my own personal sentiments as I reflect upon my experience leading the Dialogue but also particularly its goal within the Christian Community. “Our the past fifty years, the Commission, through dialogue and reflection, has journeyed together in order to build bonds of friendship, solidarity and mutual understanding between Catholics and Pentecostals. It is my hope that this important anniversary will strengthen these bonds and renew your zeal to proclaim, as missionary disciples, the joy of the Gospel in the ecclesial community and in society as a whole. In this way, bearing witness to the Lord’s prayer that all may be one (cf. Jn 17:21), you will be able to help our brothers and sisters experience in their hearts and lives the transforming power of God’s love, mercy and grace.”

May we as a Church continue to make the prayer of Jesus our own, that “all may be one,” so that our struggling and divided world may come to believe in the power of Jesus’ life, love and saving grace.