Bishop to ordain Mark DeCelles to the Priesthood on June 26 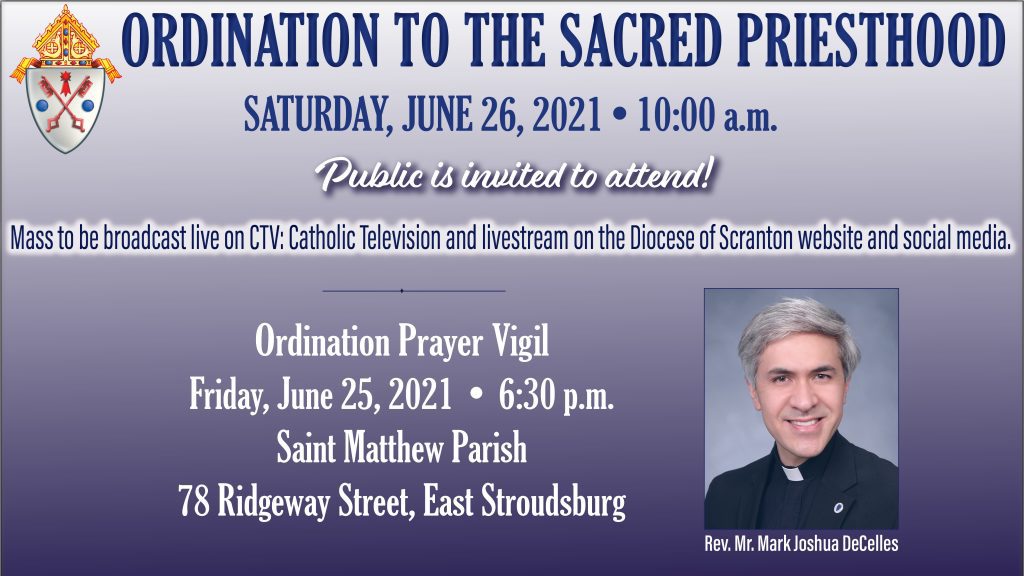 “He told me, ‘you will become a priest,’” DeCelles recalled.

On Saturday, June 26, that prediction will become a reality as Reverend Mr. Mark Joshua DeCelles, 39, will be ordained to the Order of the Priesthood for service in the Diocese of Scranton.

The Most Reverend Joseph C. Bambera, Bishop of Scranton, will serve as ordaining prelate for the Mass which will be celebrated at 10:00 a.m. in the Cathedral of Saint Peter.

DeCelles, a native son of the Diocese, was ordained a transitional deacon last year. He is now ready to take his final steps toward priestly ordination.

At DeCelles’ ordination to the diaconate last year, only 12 people attended due to COVID-19 precautions. This year, with many pandemic restrictions lifted, the ordination is open to family and friends and anyone from the Diocese who would like to attend. 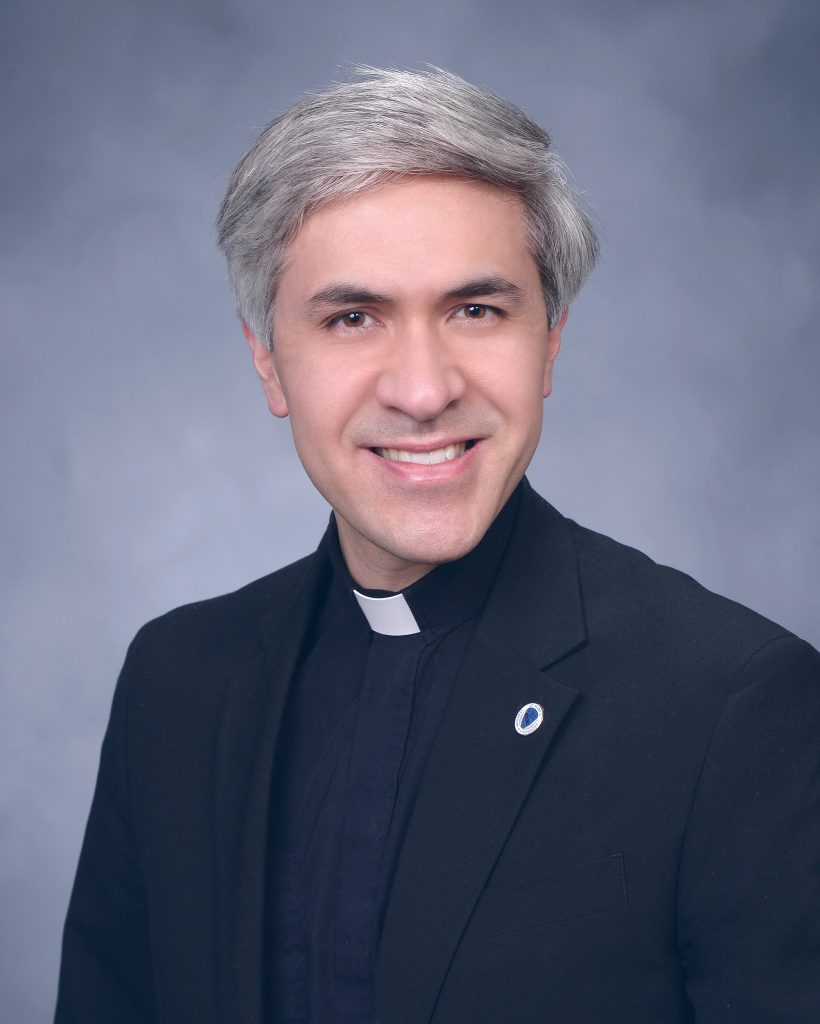 DeCelles freely admits that he never really saw himself becoming a priest.

“I always saw myself becoming a professor of theology, just like my dad. I wanted to follow right in his footsteps,” he said.

Faith was incredibly important and formative in DeCelles’ upbringing however.

“I was very fortunate to have two very faithful parents. My mom has been a nurse all her life so she spends a life of service and helping people in need. She always had a profound devotion to the Blessed Mother. She would always pray the rosary with us,” DeCelles explained. “My dad was a professor of religious studies at Marywood University for 43 years.”

DeCelles said his father helped him see and understand that his faith was credible – moreover – it was a thoughtful and deliberate way of being.

“The thoughtfulness and the intellectual precision of my father helped me to see that faith and reason went together, that there was no conflict between faith and reason, between science and religion, between philosophy and theology,” he said.

The influence of his father certainly rubbed off on Mark. Teaching has set the agenda for much of his adult life.

“I see teaching as a very important part of what I do,” he said. “Teaching is my comfort zone. I love it. I love to preach. I owe so much of that to my parents and particularly my dad.”

Even after DeCelles’ grandfather made that bold prediction one random day that Mark would become a priest, DeCelles wasn’t completely sold.

“My dad said, you want to consider your own talents, your own gifts and also the needs of the Church and that criteria never left me and I was certainly thinking about that after I finished my PhD,” DeCelles said. “I was just thinking, maybe I have some unfinished business with this question – because I see the needs in the Church and I see that I have something to offer and I wonder what would happen if I actually took this question seriously in a way that I didn’t when I was in high school or college.”

Deacon DeCelles completed his preparatory studies for the priesthood at Saint Mary’s Seminary and University in Baltimore, Md.

“There were just so many powerful and beautiful experiences in seminary,” he reflected.

From his very first day visiting, DeCelles said the staff, faculty and other seminarians surrounded him with hospitality.

“I’ve never had quite that experience of hospitality,” he admitted. “I remember thinking; these guys have something that I want.”

Describing himself as an “incurable academic,” DeCelles said he met Father Jonathan Kuhar, who was ordained a priest for the Diocese of Scranton last year, while taking his first tour of the seminary. Father Kuhar actually lent him a flash drive so that DeCelles could scan items from the seminary library.

“Everywhere I went, people wanted to hear my story and answer any question that I had,” the future priest said.

DeCelles also reflected on another experience during his first year in the seminary during an interview with The Catholic Light. He said he was assigned to hospital ministry at Mercy Hospital and spent five hours a week there for 20 weeks.

“I was a graduate student, I have a PhD in theology but I didn’t do ministry in that way until that point,” DeCelles reflected. “Going there – visiting patients, just talking to people, just listening to people and watching what was happening, watching what God was doing in those moments – made me realize that

there was something there that God had given me some gifts for pastoral ministry. The joy was really what caught me, the joy in being with people, just being present, not only with people who were suffering a lot and to be a comforting presence there but also with people who inexplicably were filled with the joy of the Lord.”

As all servant leaders often find, they receive much more than they ever give while helping others.

“What an incredible privilege to be there, to be on the front lines, to be where the action is, where God is working in the lives of people,” DeCelles noted.

DeCelles would be the first to admit his experience in hospital ministry took him out of his comfort zone – but he said it was all worth it.

The COVID-19 pandemic disrupted many lives and activities – and the pastoral year of Mark DeCelles at Saint Matthew Parish in East Stroudsburg was one of those things.

By the time DeCelles was able to return to the Pocono parish in June 2020, he had already been ordained a deacon.

“I got exposed to people’s questions and the concerns of the faithful and that was stimulating. It helped me to see where I could put the academics to use in a way that could actually help people and actually change people’s lives,” he said.

While ministering to the faithful in East Stroudsburg, even in the midst of a pandemic, DeCelles said he saw a “hunger of people for the Eucharist,” especially at a time when the pandemic made it challenging for people to attend Mass in person.

“When you see the Ordination Mass, I had the opportunity to pick out the readings. The Gospel is going to be that scene from John’s Gospel where Jesus says to Peter, ‘Peter, do you love me more than these?’ Peter says, ‘Yes Lord’ and Jesus says ‘feed my lambs,’” DeCelles said.

“I guess deaconing during the pandemic was my ‘lambs’ experience,’” he explained.

Prior to the Ordination Mass, the young church of the Diocese of Scranton is excited to pray with – and for Mark – at an Ordination Prayer Vigil on Friday, June 25, at 6:30 p.m. at Saint Matthew Parish. The public is cordially invited to attend.

DeCelles is thankful to all those who have prayed for him and supported the Diocese of Scranton’s seminarians with financial support.

“Thank you seems a little bit too easy and obvious but it has to be said,” DeCelles said.

Besides his mentors in the seminary and Diocese, DeCelles wanted to specifically thank the parish communities who have helped in his formation.

“To the people who have welcomed me into their lives over the course of my formation, in the parishes, certainly Immaculate Conception Parish, my home parish in Scranton where I received the faith, but also Blessed Sacrament Parish and Holy Cross Parish in Throop and Olyphant and Saint Matthew Parish – you have no idea how much it meant to be welcomed into those communities in the way that I was and to be welcomed into people’s lives,” he said. “That is an incredible privilege, to have the opportunity to be a minister, to learn to minister alongside you.”

Following the Ordination Mass for Reverend Mr. Mark DeCelles on Saturday, June 26, he plans to hold a Mass of Thanksgiving at Immaculate Conception Parish in Scranton on Sunday, June 27.

“That promises to be a very joyous occasion,” DeCelles remarked.

The Catholic Light will provide complete coverage of the Ordination Mass in its July 15, 2021 edition.