Golden Jubilee for residence of Diocesan priests in their golden years

DUNMORE – An anonymous writer at the time penned that it was a “combination of Seville Baroque and California Mission.  It doesn’t exactly belong where you see it stand. It might look better in a low valley in California or on a high hill in Spain. Yet, it is far from out of place in its present location.”

The writer was referring to one of the jewels of this local Church — Villa Saint Joseph — the residential abode for retired priests, who, it was written “prefer to live among the people” they have served “in full tide of human existence.”

Bishop Joseph C. Bambera will serve as principal celebrant of a concelebrated Golden Jubilee Mass of Thanksgiving on Tuesday, June 22, at 4 p.m. in the chapel of Villa Saint Joseph, commemorating — to the day — the 50th anniversary of the opening of the home for retired priests in the Diocese of Scranton, located in the idyllic Green Ridge section of Dunmore Borough.

A rare and enviable amenity to this day — one which most (arch)dioceses around the country would treasure — “The Villa” was seen as even more of a unique idea when it first opened its doors in late June 1971 to welcome those Scranton Diocesan priests at the time who had labored in the Vineyard of the Lord for so many years.

The concept for such a residence was the brainchild of Bishop Bambera’s predecessor, Most Reverend J. Carroll McCormick, sixth bishop of Scranton, who envisioned a comfortable place of rest and retirement for his older confreres. Not surprisingly, Villa Saint Joseph would become an integral goal and accomplishment of the Bishop’s history-making “Project: Expansion” campaign — a monumental diocesan-wide fundraising campaign launched in the late 1960s that provided the funds for the establishment of an independent living facility for retired clergy.

In announcing the ambitious plans for the historic project in the final weeks of 1968, Bishop McCormick indicated the Diocese gained acquisition of the Saint Gabriel’s Retreat House, on the corner of Monroe Avenue and Green Ridge Street, from the Passionist community of religious sisters as the site for the future home for retired priests. After acquiring full control of the property the following summer, the Passionist nuns would relocate to their new retreat center in Clarks Summit.

Fittingly, in conjunction with the Solemnity of Saint Joseph, Holy Spouse of the Blessed Virgin Mary and patron of the Universal Church, it was announced the priests’ retirement home would be named Villa Saint Joseph.

“These retired priests will continue to render valuable service to the Diocese by their Masses, prayers and sacrifices offered for our spiritual welfare,” Bishop McCormick said at the time.

Renovations and a repurposing of the convent of the cloistered Passionist Sisters, originally built on the site of the well-populated, residential area in 1926, had begun in earnest. The newly remodeled structure provided individual living quarters for more than 20 retired priests, with each resident’s suite consisting of a bedroom area, with an adjoining sitting room and bathroom facilities.

Special care was taken during the planning stages to provide each priest with the enjoyment of both privacy and the social and practical advantages the facility would offer.

The intimate chapel of worship affording an ideal setting for prayer and meditation would remain, as would the cloistered walks and serene garden area.

An oval marble altar of sacrifice provided the centerpiece of the newly renovated Villa Saint Joseph Chapel, which also offers four smaller altars for private Mass celebration. Today, a bronze tabernacle situated below the imposing mosaic depicting the Risen Christ behind the main altar is the focal point of the welcoming “small church,” complete with individual chairs and kneelers.

Thus, it will be exactly 50 years ago, on June 22, 1971, when Bishop McCormick blessed and dedicated the new Villa Saint Joseph, which has since been home to dozens of retired priests of the Diocese, including two bishops.

Ten years later, the Scranton prelate presided over ground-breaking ceremonies heralding a new addition for the retired-priest facility that today is home to 23 residents and can accommodate up to 31.

Having performed the duties of rector of Villa Saint Joseph for the past ten-plus years, Monsignor David Bohr is considered the longest serving in the position.

“For fifty years Villa Saint Joseph, which was an early dream of Bishop McCormick, has provided a welcoming home for more than 100 priests,” Monsignor Bohr said. “Here their daily needs are met as they live out their remaining years and continue to help out local parishes and nursing homes, as long as they physically can.”

The rector commented that resident priests are expected “to get around by themselves,” since the Villa is a retirement home — not a nursing home. Monsignor Bohr was quick to praise the lay staff who tend to the cooking, housekeeping and administrative chores. 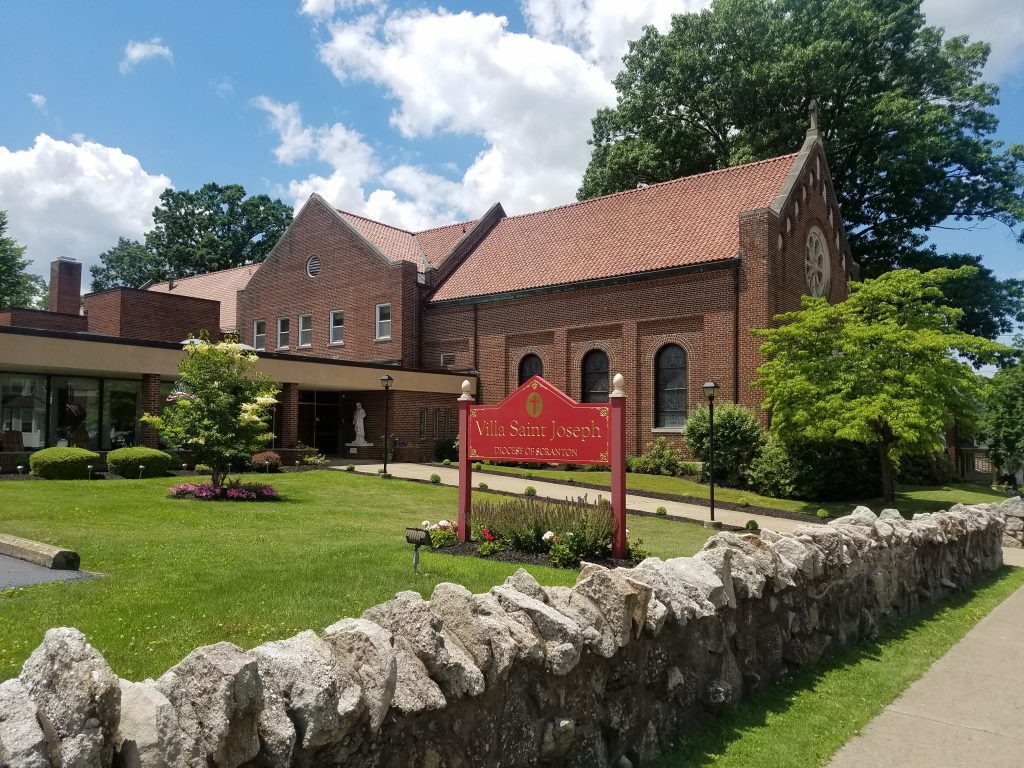 “A half dozen of our residents are in their nineties, having celebrated their sixtieth and seventieth anniversaries while here,” Monsignor noted. “The priests of the Diocese of Scranton are truly blessed; many dioceses across the country do not have such a place as Villa Saint Joseph.”

At 90 years of age, Monsignor William Ward has called the Villa home since his retirement from pastoral ministry 15 years ago. He is especially fond of the kinship and camaraderie the residence has to offer.

“What I like best is the friendship between the residents and how we help each other out when the need arises,” Monsignor Ward noted, adding that the “social hour” that takes place each afternoon in the spacious lounge area before mealtime is always a highlight of his day.

“I am happy that I chose to retire to Villa Saint Joseph,” he continued. “It has been a good experience and I am pleased to tell the story of the Villa. It is a wholesome place to live in retirement.” Monsignor also quipped, “And the rent is reasonable.”

Monsignor John Bendik was not only one of Monsignor Ward’s successors as pastor of Saint John the Evangelist Parish in Pittston, but he also followed him to Villa Saint Joseph.

“First of all, a sincere word of gratitude to our Diocese and our wonderful people who support the Diocesan Annual Appeal,” Monsignor Bendik commented. “For fifty years they have made it possible for us to have such a marvelous place in which to retire.”

Extolling the home-like atmosphere the residence has to offer, he indicated it did not take long before he would refer to “going home” to the Villa after being away from the place.

“It truly is beautiful,” the jovial Monsignor noted. “Our staff treat us like family. It is like living in a five-star hotel with gourmet meals provided every day.”

Having been ordained 54 years ago, Monsignor Bendik took up residence at the Villa in 2018. He is continually inspired by his fellow retirees, who range in age from 75 to 97.

“Many spend quiet hours of prayer in our beautiful chapel,” he remarked. “If there is someone in need of a ride to go to a doctor’s appointment or for medications, a fraternal response is quickly given.”

Monsignor continued, “We often speak lovingly about our former parishioners and have cherished memories of our pastoral ministry. We miss parish life, so it is a great joy to see the smiles on the faces of our priests when mail arrives and there is a card or letter from a former parishioner, especially around holidays, ordination anniversaries or birthdays.”

The retired pastor and chaplain concluded by noting how appropriate it is that the Villa is named after Saint Joseph, who provided a home for Jesus and Mary. “Now, our patron watches over us as we grow ‘in wisdom and age and grace before God,’” he said, referring to the Gospel of Saint Luke.

Monsignor Vince Grimalia deemed it a privilege to have served as rector of the Villa Saint Joseph community during the mid-1990s.

“It was a period of my life that truly helped me grow in my own vocation, as I interacted with priests who had such diversity of experience,” Monsignor Grimalia noted. “During my time at the Villa, they generously shared their gifts of joy and faith.”

He referred to residing at Saint Joseph’s as another type of ministry and an opportunity to grow in friendship and practice the works of mercy.

“The Villa truly houses a priestly fraternity, a place where the history of the Diocese is still alive and continues to be told by the inspiring lives of the men who served so well,” Monsignor said. “This home is a wonderful gift for all concerned.”