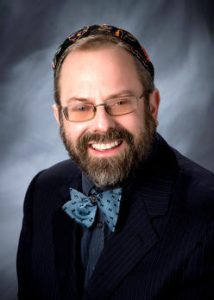 SCRANTON – When Rabbi Daniel Swartz received a letter from the Vatican last December inviting him to help put together a new declaration on climate change, the leader of Temple Hesed had only one thought.

“My first reaction was which of my friends is pranking me,” Swartz admitted.

The letter was no joke. Swartz is one of 40 religious leaders and 10 scientists from around the world invited to participate in the ‘Faith and Science: Towards COP26’ conference on Oct. 4.

While Rabbi Swartz is preparing to head to Rome to participate in the conference, he has already taken part in a series of online meetings with the other members of the group – discussing how religion and environmental policy can intersect.

“We discussed what our different faith traditions from around the globe have to say about our responsibility to each other, to our common home, to action on climate change,” he said.

Rabbi Swartz called his friend and colleague in ministry, the Most Rev. Joseph C. Bambera, Bishop of Scranton, for his advice before agreeing to participate. The bishop assured him that under the direction of Pope Francis, conferences such as this are “true consultations.”

“The bishop was exactly right,” Swartz said. “I spoke up early and often and really shared teachings from the Jewish tradition and my own experience about the need for us to promote both justice and hope.”

Swartz holds degrees from Brown University in Geological Sciences and in Environmental Policy. He is also the author of “To Till and To Tend: A Guide for Jewish Environmental Study and Action” and “Faith Communities and Environmental Health: From Global to Local.”

The rabbi is one of only four Americans selected to participate in the drafting of the climate change declaration. Other religious leaders across the globe that participated in the discussions included the Archbishop of Canterbury, the General Secretary of the World Evangelical Association, the General Secretary of the Society of Friends of the World Lutheran Church and many others.

“It was a huge honor for me to participate with these other folks who are very notable religious leaders,” Rabbi Swartz said. “I really cannot emphasize enough that if I had not spoken with Bishop Bambera and he hadn’t encouraged me to speak up and to believe that if they asked me to be a part of this, then I deserved to be, I would have been really intimidated!”

Bishop Bambera says he is delighted that Rabbi Swartz is being acknowledged by the Vatican for his care and concern for social justice issues, particularly the environment.

“In my many years of friendship with Rabbi Swartz, I have come to know just how passionate and dedicated he is to addressing the crisis of environmental justice and demonstrating the connection between Judaism and the environment. As religious leaders and scientists gather at next month’s conference, Rabbi Swartz possesses the deep insight and wisdom to help address the many challenges that our planet faces in the coming decades and centuries,” Bishop Bambera said.

The bishop also noted that Rabbi Swartz’s work parallels the work of Pope Francis, who in 2015 published his encyclical, Laudato Si, which focuses on the urgent need to protect the environment, reduce wasteful lifestyles, stem global warming and protect the poor from the effects of climate change.

“He is such a hero of mine,” Rabbi Swartz said regarding Pope Francis. “As the pope has said, this is really one of the most profound religious questions of the day – what do we do in terms of how we treat our common home because it touches on so many aspects of what we consider to be fundamental religious questions. Most fundamentally, how can you be more pro-life than taking actions that may save literally billions of souls over the course of the future of humanity.”

When Rabbi Swartz and the other religious and science leaders come together on Oct. 4, they are expected to sign a climate change declaration that they have been working on. Swartz says the document has already undergone four drafts – and will be released ahead of the United Nations Climate Change Conference in November in Glasgow, Scotland.

The document is expected to press politicians to make courageous and ambitious decisions at the U.N. Conference.

“With all signs saying we’re running out of time” to address the issue of climate change, Rabbi Swartz says the document will indicate what “the faith community can do to help political leaders from around the world take this more seriously and act more urgently.”

Once signed, Rabbi Swartz will advocate for spreading the declaration around the world and getting all faith leaders to support it.

“I’m going to make the case that we should have some way for faith leaders and all people of faith to ‘sign on’ whether they are actually additional signatories to the original document or can sign a statement saying they agree with the principals,” Swartz said. “Let us get millions of people to sign this and speak from their faith.”

“It’s not just about us but it’s about our children and our children’s children,” he said.

For the hope of his own daughter, Alana, who is 22, Rabbi Swartz hopes his efforts will make a difference.

“I hope our grandchildren live in a world where they have the blessings of a stable climate. There is a significant possibility that they won’t,” he explained.