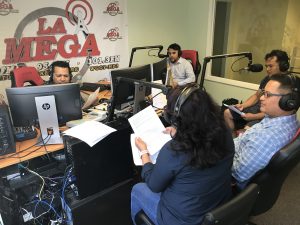 Through a partnership with La Mega radio, a local Spanish radio station serving the Latino communities in the Wyoming Valley, the Diocese now hosts a one-hour radio program to discuss the fundamentals of the Catholic faith each Saturday morning from 11:00 a.m. until noon.

The program is available locally at 94.9 FM in Scranton and 95.3 FM in Wilkes-Barre. The station also streams its programming at lamega95fm.com.

Jose Flores, Coordinator for Hispanic Ministry in the Diocese of Scranton, developed the idea for the show and secured the weekly timeslot.

“I felt that this was a great opportunity to reach out to our Spanish community and to respond to their needs,” Flores said. “Our primary goal is to share the Gospel and evangelize and share our faith and bring people back to the church if they are not there.”

Flores established a team of five people who help to get the weekly radio show on the air. Even though they are all new to radio broadcasting – they all participate in the live broadcasts. The team also receives assistance and guidance from Father Jonathan Kuhar, Parochial Vicar of both Saint John Neumann Parish and Saint Paul of the Cross Parish in Scranton.

Rufino Cano, a member of the radio broadcast team, says using radio is an effective means of communicating with the local Hispanic population.

“People listen to the radio, either for entertainment, at their jobs or at their homes. Having a Saturday morning program will be helpful to all of them,” he said.

Flores adds that having the radio program is a way to welcome newcomers into Catholic churches throughout the Diocese of Scranton.

“We’re seeing a wave of people moving in from New York and New Jersey so this is an opportunity for us to create community with them,” Flores explained. “I have met a few people who didn’t even know there was a Spanish Mass in town so I think this radio program is definitely an important tool for creating community and welcoming those who are new to the area into the Church.”

During the first few weeks, Spanish Catholic radio program members have introduced their ministry to the listening audience, discussed the love that God has for each one of us and talked about matrimony as both a Sacrament and Vocation. During the month of September, the program is focusing on the importance of the bible.

“A lot of people don’t know how to read the bible or know how many books are in the bible,” Cano said.

Even in its first few weeks, the radio program is getting the attention of Hispanic parishioners.

“When we first aired our program, after Mass, a couple people approached us saying congratulations, saying that it is nice for the Diocese to have something for the Spanish community that people can listen to. We had many congratulations from people. They were happy for us and the ministry that we are starting,” Cano added.

Seven years ago, Cano attended Mass at Saint John Neumann Parish in Scranton but was not involved in the life of the church. That has changed. He has joined the parish choir and taken classes to learn more about his faith – a faith he now willingly shares with others on the radio.

“I feel grateful and good to serve others through new ministries,” he said.