Jordyn Glover, a senior at Holy Cross High School, helped Mary, Mother of God Parish design this billboard which has been put up at the intersection of North Main Avenue and Providence Road in Scranton. The billboard, which reads, “Families Need a Stable Background,” is an invitation to the community to return to church this Christmas. (Photo/Eric Deabill) 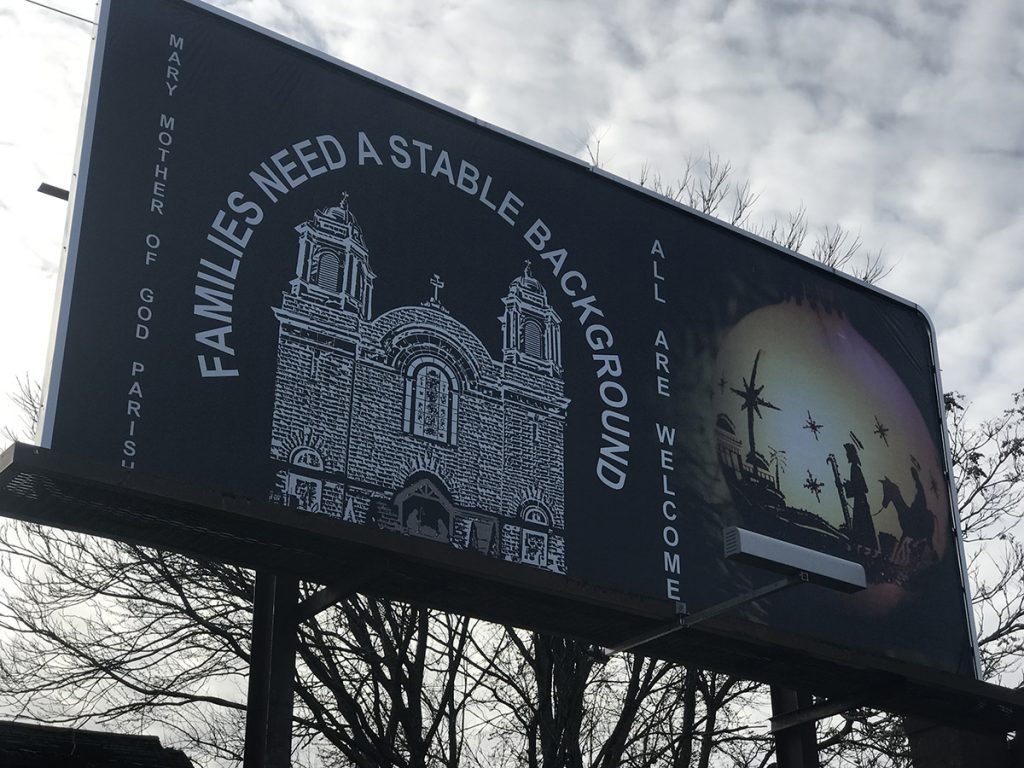 SCRANTON – With thousands of drivers passing by it each day, a Scranton parish hopes a new billboard will remind them of the importance of Christmas.

Mary, Mother of God Parish has put up the billboard at the intersection of North Main Avenue and Providence Road in North Scranton, aiming to catch their eye and  invite them to church.

“We have to work very hard to come up with new and creative ways to get the message out, to get the invitation public. We put campaign-style signs all over North Scranton in visible places which said, ‘Shopping for a church this Christmas’ with our very visible, massive church that most people recognize if they live in the city of Scranton. The billboard was the next step up,” Father Cyril Edwards, pastor, said.

The billboard features the words “Families Need a Stable Background.”

It features a drawing of the parish along with the manger scene in front.

“I just always loved to draw, even with chalk, simply on a sidewalk, even with a rock,” Glover explained. “I just wanted to showcase Jesus and Mary.”

With the billboard in place, Father Edwards is hoping it has an impact.

“In a day where the Advent season is lost to secular shopping, if we’re not reaching the family, we’re wasting our time. If it’s not about the stable, then we’re just shopping for presents. It has to be about celebrating the birth of Jesus Christ,” Father Edwards explained.

Glover was excited the first time she saw her billboard on full display.

Father Edwards says if the billboard helps to bring one person back to church – or even make Jesus present in the minds of people – the effort will have all been worth it.

“The church exists to evangelize,” he noted. “If it just catches a few eyes, oh yeah, I need to get going back to church … it is worth it.”