The facility, which is operated by Catholic Social Services of the Diocese of Scranton, serves an average of 300 meals per day.

By ALAN K. STOUT
Special to The Catholic Light

WILKES-BARRE — Every day, 365 days per year, the Saint Vincent de Paul Kitchen provides hot meals to those in need. Guests are offered an assortment of quality meals ranging from baked chicken to meatloaf and pasta. The menu changes daily. The facility is not, as some call it, a “soup kitchen.” Yes, soup might be served as a compliment to the day’s meal, but clients at Saint Vincent de Paul are always offered much more, including fruits, salads, milk and desserts.

Mike Cianciotta, director at Saint Vincent de Paul Kitchen, says the facility – which is operated by Catholic Social Services of the Diocese of Scranton – provides a basic human necessity to those that it serves.

“Basically, it’s about taking care of the essential need of people – food,” says Cianciotta, adding that, by saving people

on the cost of food, they can better pay their other bills. “Especially for the elderly, if they’re on a set budget or pension,” he says. “Also, by coming here, they can get out of the house and have a bit more of a social life. We see how much they enjoy dining together.”

Cianciotta says the most common mistake that people make about the kitchen is the perception that most of its clients are homeless, which they are not. Some are retired and are on fixed incomes. Some may suffer from a mental or physical disability which prevents them from working. And many are actually the working poor.

“The idea that only homeless people need this place is a total misconception,” Cianciotta says. “There are people that can afford other things, such as their housing and heating, but they can’t afford food. This enables them not to have ‘luxuries,’ but a ‘necessity’ of life.

“We have families come in,” he adds. “When the children are off from school, it helps parents provide other things for their kids, because they can come here and eat.”

The Saint Vincent de Paul Kitchen, which is located at 39 E. Jackson Street in Wilkes-Barre, marked its 35th anniversary last fall. It was founded in 1983 under the leadership of Monsignor Donald McAndrews, the former executive director of Catholic Social Services. It serves an average of 300 meals per day. Lunch is served seven days per week, from 11 a.m. to 12:30 p.m. Dinner is served Tuesday, Wednesday and Thursday from 5 to 6 p.m.

“The mission of Catholic Social Services of the Diocese of Scranton is to serve individuals and families in poverty and hardship, as we are called by Christ to do, and to respond compassionately to their needs,” says Mary Theresa Malandro, Diocesan Secretary for Catholic Human Services and Chief Executive Officer of Catholic Social Services. “As a Catholic agency, we advocate for individual dignity and self-sufficiency and actively give of ourselves to replace despair with hope. One of the locations we have the honor of serving those in need is at Saint Vincent de Paul Kitchen.”

“We could not survive without them,” says Cianciotta of the volunteers. “By volunteering, it saves us the expense of having to pay employees, which we could never afford. If you think about it, we’re a catering hall that’s open 365 days a year, and we’re not charging anyone. That’s basically what we are. And so if we had to hire a line of servers, and people to help with food prep, and people to wash dishes, and people to work in the food pantry and clothing store, it would be an astronomical amount of money. The volunteers are a vital part of the operation.”

The cost to operate the Saint Vincent de Paul Kitchen is $498,000 per year. It receives support, funding and grants from agencies such as the United Way of Wyoming Valley, the Commission on Economic Opportunity and the Weinberg Food Bank. Supermarkets such as Sam’s Club, Schiel’s, Walmart and Wegmans also donate food, which helps supplement the menu.

“We have utilities, we have employees, we have insurance, we have maintenance – that’s where the main expenses are,” says Cianciotta. “By not having to use funds on the things that the stores supplement, it enables us take care of this building and keep the place going.”

Still, Cianciotta says that most funding for the kitchen comes from corporate donations and private individual donations. And since most protein items on the kitchen’s menu need to be purchased, such donations are critical. For $125, any person, family or business can sponsor that day’s meals.

Cianciotta says that, after nearly nine years of managing the kitchen, he’s come to realize just how important it is to the community and to those that visit. Whether it’s a typical summer day, or Thanksgiving Day, or Christmas Day, he knows people are thankful and appreciative.

“You get to know them and you get to talk to them,” he says. “They’re very grateful for us being here.” 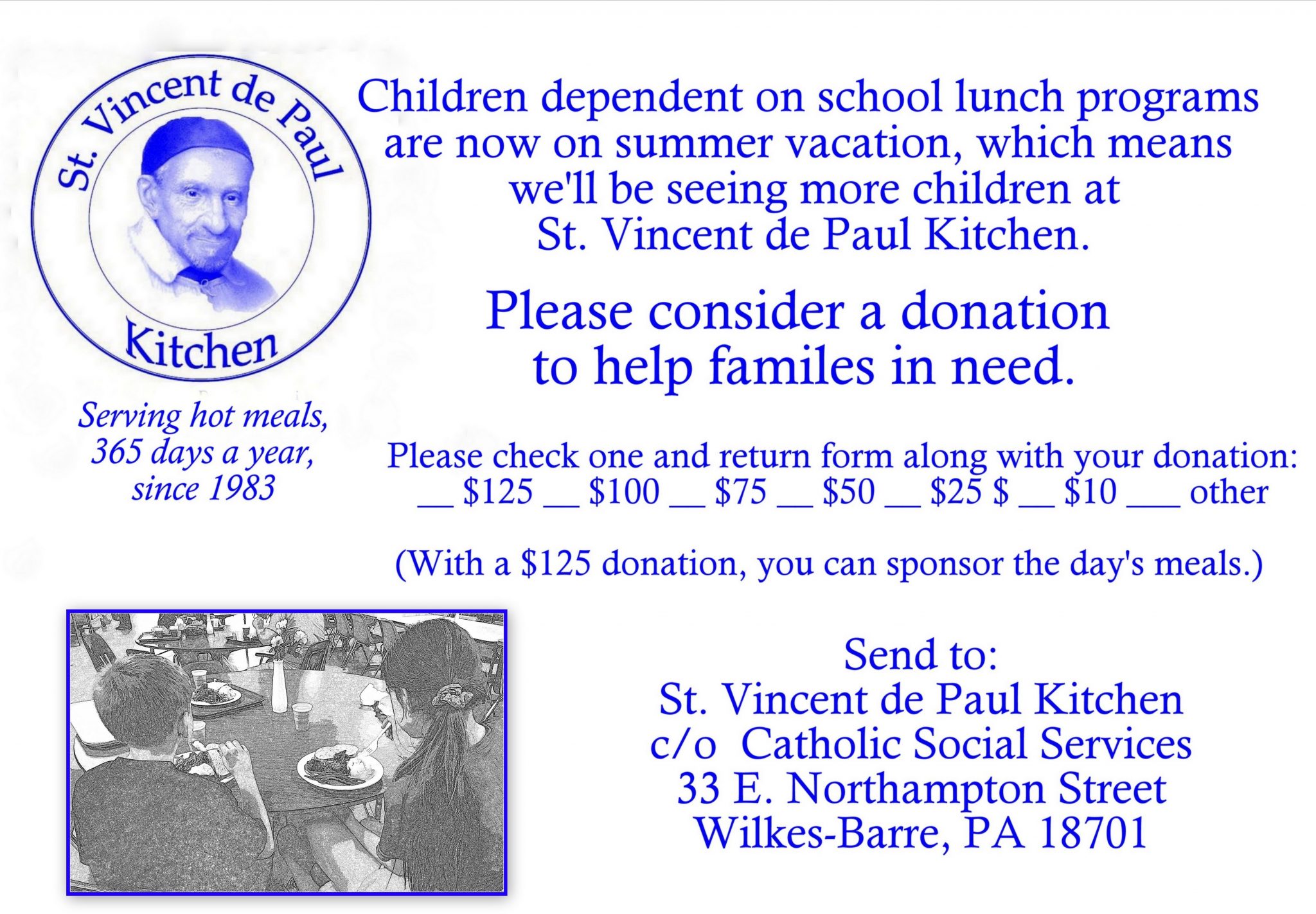