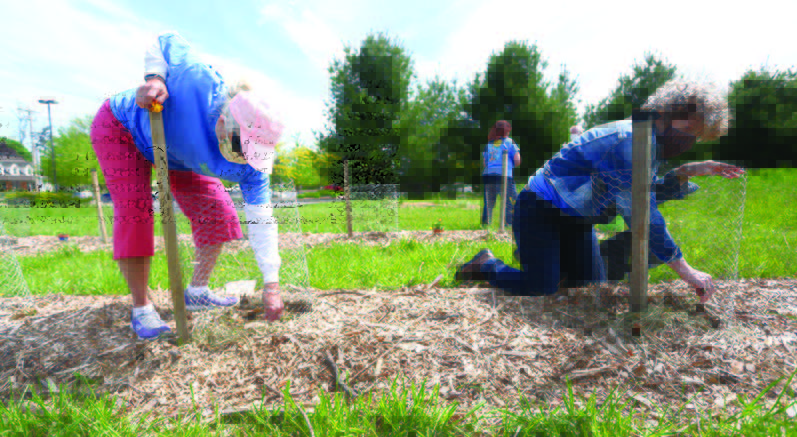 MUNCY – It was Fall 2015 when the social justice reading group at the Church of the Resurrection decided to take an in-depth look at the recently released papal encyclical Laudato Si’, Pope Francis’ treatise on the “care for our common home,” in which he implored the world’s inhabitants to make safeguarding planet Earth an “urgent priority.” The examination of the Holy Father’s historic document inspired a small team of parishioners to put the environmental encyclical into serious action and spread their message of care for creation to the parish at large. Creation-appreciation walks were organized, along with plant giveaways and disseminating educational messages. However, according to group spokesperson Irmgard Seidl-Adams, it was not until they acted upon a suggestion by their pastor, Father Glenn McCreary, to get their hands dirty and turn a field on the church property into a living, visible sign of their commitment that the project began to resonate with the greater parish community.

“We prepared the ground (last) fall and we planted the bushes this spring.” Long-term plans also call for a small grove of native trees, any one of which parishioners can dedicate to the memory of a loved one, and a separate space for theme gardens. “These can be a meditative garden, a prayer labyrinth or a pollinator garden,” she explained. Thoughtful consideration has also been given to a garden plot, whose harvests will benefit area families in need.

“By now, our small group has grown to ten active members,” said Seidl-Adams, who indicated the project has been aided by two successful fundraisers, including the sale of nature greeting cards decorated with original depictions by local artists. Since 2017, the Muncy parish’s ecological endeavor has been supported by the Social Justice Trust Fund Grant Program of the Diocese of Scranton.

“(The grants) have provided training for the initial team members, seed money for our fundraisers and, now, the essentials for the blueberry patch,” she said. The fruits of the undertaking literally came to bear during the recent celebration of Laudato Si’ Week (May 16-24) – in commemoration of the fifth anniversary of the Pope’s landmark encyclical – when the blueberry patch and larger field at the Church of the Resurrection were blessed and dedicated by Father McCreary. Coming up with a name for the hallowed ground was easy: “Saint Francis Field” (of course) in tribute to the patron saint of ecology and the natural environment.