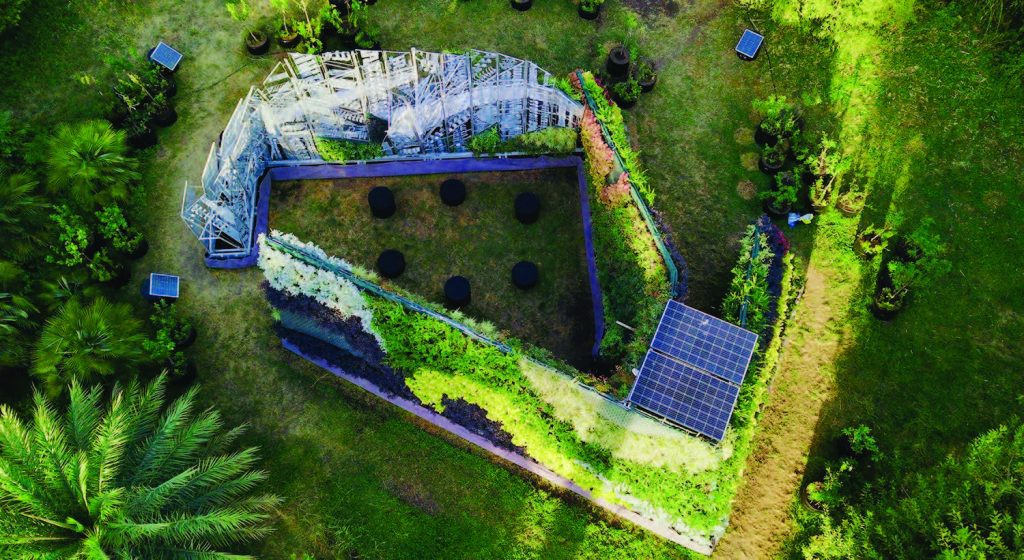 WILLIAMSPORT  –  A  massive structure which will hopefully educate people around the world in the importance of ecology  can trace  its roots back to Lycoming County.

Pennsylvania College of Technology, based in Williamsport, recently embarked on a substantial  undertaking  that may get the attention of Pope Francis since it celebrates a pressing worldwide issue near and dear to his heart.

The Holy Father’s 2015 encyclical on the care for our common home, Laudato Si’, provided much of the inspiration for the project, which employed the welding expertise and facilities offered at the Penn College.

Referred to as an impressive structure to encourage the “ecological awakening of humanity,” the so-called “Living Chapel” is  a  fabricated  structural  framework engineered and created by nine of  the college’s instructors and 15 students over a ten-week period.

Coinciding with the fifth anniversary of the eco-friendly papal document, the Living Chapel was  previewed recently at the Botanical Garden of Rome during Global  Catholic  Climate  Movement activities. Its formal unveiling – via a livestreaming video – is scheduled for the United Nations’ World Environment Day on June 5.

When  social  distancing  rules permit, the open-air sanctuary – made of aluminum and recyclable/repurposed materials  –  will  visit  the Vatican  in Rome before moving to its permanent home  in Assisi,  Italy.  The  ultimate destination proves quite fitting since it is the birthplace of Saint Francis, patron saint of the environment,  whose small church provided  the footprint  for the Living Chapel.

“I don’t think it has sunk in yet, what it’s going to mean to everybody,” James N. Colton II, assistant professor of welding who led the Penn College fabrication team, said. “It’s definitely a big deal.”

The Penn College crew worked 3,500- plus hours and used nearly 5,000 feet of aluminum to build the four walls for the chapel, designed to integrate nature, art, music and architecture. Two sections separate to create a space in the shape of a cross. The other walls connect to form a geometric symphony  of angles. The structure measures approximately 45 feet long by 30 feet wide, with heights ranging between 10 and 15 feet.

“When you enter into the space, you’re enveloped by this holistic experience that is intended to be this instance of serene harmony between humanity and nature,” Julian Revie, creative director of the Living Chapel and associate director of music at the Center for Music and Liturgy of Saint Thomas More Chapel at Yale University, said.

Revie’s discussions with the Vatican ecology division led to the concept for the Living Chapel in order to create a unique combination of music with architecture influenced by Porziuncola, the chapel in Assisi rebuilt by Saint Francis in the early 13th century.

“The initial (plans) that we saw didn’t show  the complexity  of the project,” Colton said. “We were definitely a little bit more overwhelmed once we got into it.”

Sara  Stafford,  a  welding  and fabrication engineering student from West Chester, commented, “It’s just amazing to say, ‘I have a couple  welds on that.’ Penn College creating a huge structure and piece of art for Italy. Who would have thought?”