Mass of Thanksgiving and Sending Forth for Bishop-elect Walsh to take place Feb. 15, 2022 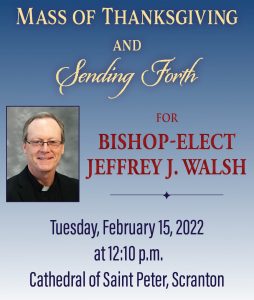 CARBONDALE – The faithful of the Diocese of Scranton are invited to participate in a Mass of Thanksgiving and Sending Forth for Bishop-elect Jeffrey J. Walsh on Tuesday, Feb. 15, 2022, at the Cathedral of Saint Peter in Scranton.

Everyone is invited to participate and greet Bishop-elect Walsh, who was appointed by Pope Francis to be the sixth bishop of the Diocese of Gaylord, Mich., on Dec. 21, 2021. His episcopal ordination and installation is scheduled for early March.

Many parishioners and friends of Bishop-elect Walsh plan to attend the Mass. They were equally as excited to find out the announcement.

Less than two hours after the news initially broke – Father Jeffrey J. Walsh was being appointed as the sixth bishop of the Diocese of Gaylord – many of the Bishop-elect’s current parishioners already knew about the exciting announcement as they gathered for morning Mass on Dec. 21, 2021.

Even before the 8 a.m. liturgy at Our Lady of Mount Carmel Church, long-time parishioner Skip Scarpino made sure everyone arriving had heard.

“Did you hear the news?” he asked multiple people as they arrived on a beautiful Tuesday morning.

“I was shocked when I heard the news. I remember the first year Father Walsh was a priest, he was stationed here, him and I got to be very good friends. I’m happy for him,” Scarpino said.

Right after Father Walsh was ordained a priest on June 25, 1994, his first assignment was to serve as assistant pastor at Saint Rose of Lima Church.

“He is a good pastor. He takes care of his people,” Scarpino added. “Ever since then we kept in touch, every Christmas, so on and so forth, I’m happy for him. I wish him all the luck in the world.”

Parishioners Glenn and Anna Moskosky also remember Father Walsh from his first assignment more than 25 years ago at Saint Rose of Lima Church.

“I remember him when he first came to Saint Rose. It was his first assignment. He moved on and when he came back (in 2020) we were all excited about having him,” Glenn said.

The couple, who has been married 56 years, admit the announcement is bittersweet because they will once again have to send off Father Walsh – this time to the Diocese of Gaylord.

“He’s very pious. I think he’s going to do a really nice job,” Glenn added. “He’s not only a very good priest but he’s a good friend.”

Hundreds of people on social media echoed the feelings of Bishop-elect Walsh’s parishioners in Carbondale.

Reacting to the news on the Diocese of Scranton’s Facebook page, Lynn Cawley wrote, “Father Jeff Walsh is the epitome of a humble servant of God. Northeast PA is losing a great man!”

In response to the overwhelming number of messages, Bishop-elect wanted to thank everyone who posted a kind message or send him congratulations.

Father Walsh said, “In gratitude for all the comments regarding my announcement as Bishop of the Diocese of Gaylord, I want to say thanks to all who took time to express congratulations/well wishes/kind remembrances via social media. My heart swelled with love as I read each comment and I felt truly blessed with the gift of friendship. As the adventure unfolds, the welcome mat will always be out in the wilds of northern Michigan to family and friends from NEPA. God Bless!”