It’s amazing how much gratitude surfaces,” Bishop-elect Walsh introduced to Diocese of Gaylord 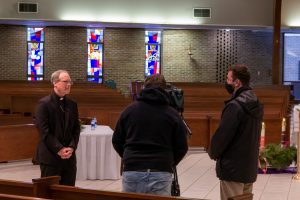 It was a call that would eventually change his life.

“Your phone buzzes; you can feel it in your pocket. I looked at it and it was Washington, D.C.,” Father Walsh said. “I thought it was probably a robocall. I don’t think I know anybody in Washington, D.C., so I just let it go and finished the meal.”

When he got to his car, Father Walsh learned the person on the other end of the call was actually Archbishop Christophe Pierre, apostolic nuncio to the United States, asking to have a conversation.

“My heart sunk and I went to a place where I could call him,” Father Walsh added.

Archbishop Pierre was calling to inform Father Walsh that Pope Francis appointed him the sixth bishop of the Diocese of Gaylord.

Father Walsh recited the events leading up to his announcement as Bishop-elect in the Diocese of Gaylord at a news conference on Dec. 21, 2021, at Saint Mary Cathedral in Gaylord. It was the first time Father Walsh was publicly introduced as “Bishop-elect.”

“It’s obviously not something you ever expect to happen in your life but here it is and I’m so grateful,” Bishop-elect Walsh said.

Bishop-elect Walsh thanked God, Pope Francis, Archbishop Pierre and many others for the trust they have placed in him as he delivered remarks.

The Diocese of Gaylord livestreamed the news conference and the 30-minute program was broadcast live in the Diocese of Scranton on CTV: Catholic Television. That is how many people, including Bishop-elect Walsh’s parents, were able to view it.

During his introductory remarks, Bishop-elect Walsh was able to share his vocation story as well. After being educated in public schools and raised in the Catholic faith by his parents and grandparents, it was not until attending The University of Scranton when the opportunity really presented itself.

“I think I started to realize that faith was something more than what I could just take on a surface level. I heard my peers talking about faith and was challenged through a retreat to consider more deeply what faith meant in my life,” he explained. “I heard that voice. It’s really a matter of taking the first step to say ‘Yes Lord, here I am, let me give this a try.’”

Looking forward to his episcopal ministry, Bishop-elect Walsh hopes to mirror the vision of the Gospel.

“Something that is important to me, that governs my life, is the sense of God’s Providence and that has come very powerfully to me especially through the story of (Father) Walter Ciszek. You’ll hear me preach about him often. I’m a real advocate for his cause. He really came home from his experience of being a prisoner in Russia during the Second World War, convinced that is what God preserved him for, so that he could get that message of God’s Providence out to as many people – just trusting that even in the midst of difficulty, trials and sorrow – God has a plan,” Bishop-elect Walsh said.

“The only way you could describe this situation is this is a marriage made in heaven because we couldn’t come up with it on our own. It’s a special joy to welcome him today,” Bishop Hurley said, prompting a laugh from the crowd gathered at the news conference.

Before ending the news conference, Bishop Hurley thanked the people of the Diocese of Scranton.

“We’re grateful for the sacrifice that you make, so that we may have a new bishop here,” he said.

Bishop-elect Walsh’s episcopal ordination and installation has been set for March 4, 2022, at 2 p.m. in Saint Mary Cathedral in Gaylord.