SCRANTON – On his wedding day, Patrick Aquilio made a promise to his new wife. Twenty-five years later, he continues to keep that promise – to love and cherish his wife, Julie.

The couple, parishioners of Epiphany Parish in Sayre, were among more than 100 who celebrated milestone anniversaries with a special Mass Sunday, June 6, at the Cathedral of Saint Peter. The Most Reverend Joseph C. Bambera, Bishop of Scranton, served as principal celebrant and homilist for the liturgy which recognized married couples celebrating 25, 50 or more years of marriage in 2021.

“I’ve actually been looking forward to this for quite some time. I heard about this Mass many, many years ago and I looked forward to the time that we were able to celebrate just like everybody else,” Patrick said.

“It’s hard to believe that 25 years ago we were just out of college and the whole world was ahead of us and how much we have accomplished in the last 25 years,” Julie added. “We have four wonderful boys who are all growing and becoming productive citizens and they’re continuing on with their Catholic faith. It has been a blessing!”

“I don’t believe that there is any other Mass that we celebrate as a Diocese that generates more interest and excitement than this one,” the bishop said. “Thank you for your presence and for your example!”

The date of the Wedding Anniversary Mass fell on the Solemnity of the Most Holy Body and Blood of Christ. The bishop said the link between what the Church celebrates on Corpus Christi Sunday and what is acknowledged in the lives of married couples speaks profoundly to the power of authentic, Christ-like love as it has grown in each couple’s lives through the Sacrament of Marriage.

“In the Church’s ritual for marriage, the words of blessing bestowed on a newly married couple acknowledge the fact that the union of a man and woman is so holy a mystery that it symbolizes the marriage of Christ and His Church. In other words, your relationship as husband and wife is somehow meant to reflect God’s love for us,” Bishop Bambera explained.

“I’m still trying to process that we’ve been together that long,” Deacon McDonald said with a chuckle.

“It’s a big number. I still feel like the bride I was sometimes. He still makes me laugh. He makes me mad sometimes but he can still make me laugh,” Ann Marie quickly jumped in saying.

With four children, the Dunmore couple acknowledged marriage is a gift but it also requires work.

“Take things in stride. The good will come and the bad will come but if you have faith and trust in each other and God, you’ll get through it all,” Ann Marie added.

Patience and laughter have been the keys to success for Carl and Kathleen Ives of Dunmore who are also celebrating five decades of marriage this year.

When she first met Carl at a pizza shop in Olyphant, Kathleen knew immediately she had met her match.

“The minute I met him, I knew he was the one,” Kathleen said.

John and Angela McCarthy of New Milford, who attend Most Holy Trinity Parish, said it was an honor to attend the Wedding Anniversary Mass. They were especially struck by the Bishop’s homily and being able to renew the commitment they made 50 years ago.

“It was wonderful. The bishop is excellent. We watch him on TV all the time,” Angela said.

The Susquehanna County couple says they have been blessed with two daughters as well as grandchildren. 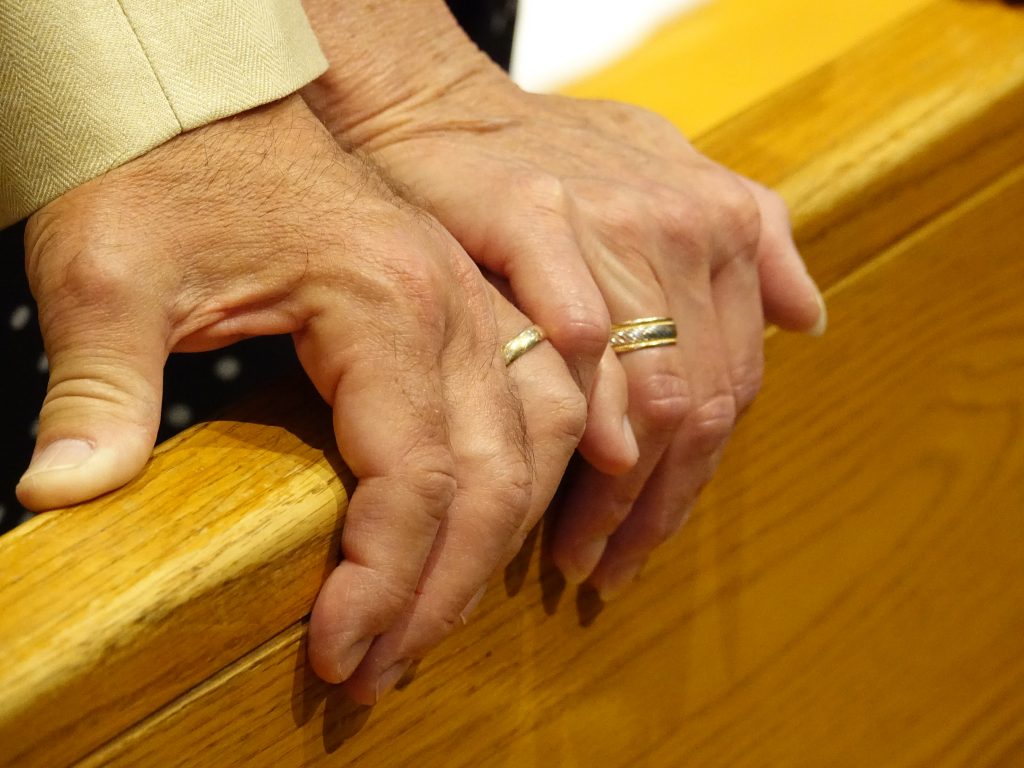 When asked for a piece of advice they might give to a newlywed couple, both weighed in.

“Compromise a lot, talk to one another and have conversation,” Angela explained.

“Have a lot of meetings at the kitchen table,” John added, explaining that talking about problems is always better than not addressing them.

Compromise and sacrifice were two of the ideals noted by Bishop Bambera in his homily.

“In the end, marriage is less about the things you’ve acquired and the bucket list that you’ve fulfilled. It is far more about each of you giving of yourself in a total and complete manner. The real miracle of Christian marriage is that when this Sacrament is lived in an authentic way, you don’t have to look very far for the deep sense of happiness and contentment that you’ve achieved and all of us seek,” Bishop Bambera said as he congratulated all of the couples.