La Festa Italiana Mass to be celebrated Sept. 5 in Scranton 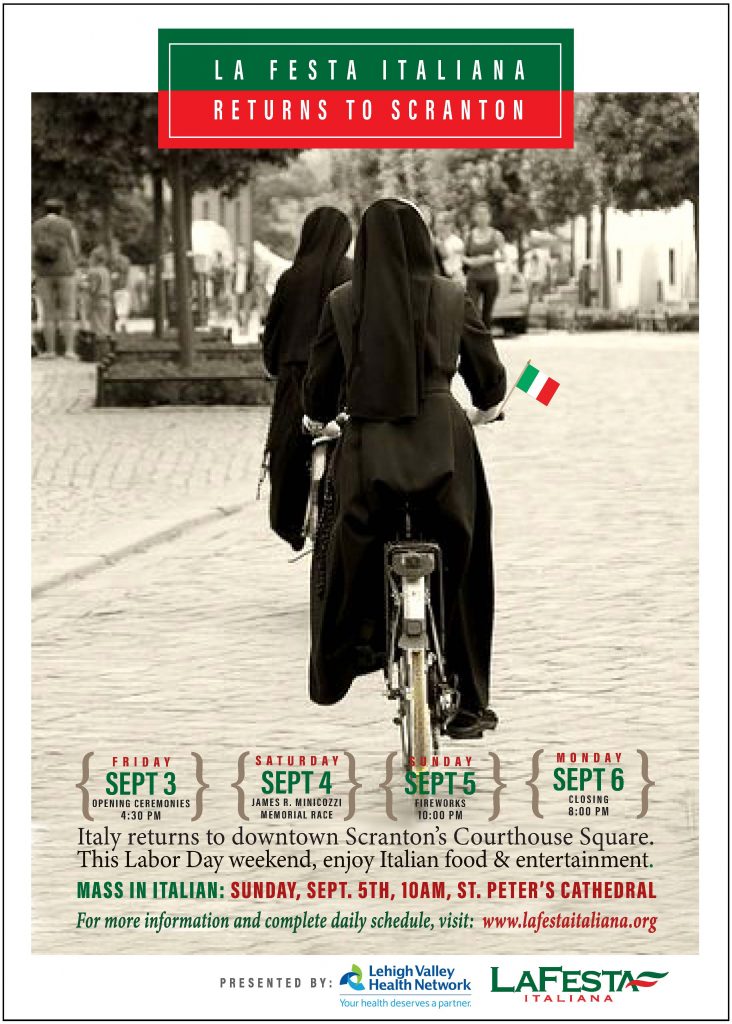 SCRANTON – The annual Mass in Italian will be celebrated at 10 a.m. on Sunday, Sept. 5, at the Cathedral of Saint Peter in Scranton. All are welcome to attend.

The liturgy is celebrated in conjunction with La Festa Italiana, which occurs over the Labor Day weekend, Friday through Monday, Sept. 3-6, on Courthouse Square, one block away.

Father David Cappelloni, V.F., La Festa chaplain, has announced that the Most Reverend Joseph C. Bambera, Bishop of Scranton, will preside and the homilist will be Oblates of Saint Joseph Father Paul A. McDonnell.

The Mass will be broadcast live by CTV: Catholic Television of the Diocese of Scranton and will be rebroadcast on Tuesday, Sept. 7, at 8 p.m., and Wednesday, Sept. 8, at 10 a.m. It will be available for viewing later in the week on the Diocesan website at  www.dioceseofscranton.org.

Seminary, Laflin, where he obtained a bachelor of arts degree in Philosophy at King’s College, Wilkes-Barre. He then left for Italy for five years, first completing the novitiate year in Padua and then in Rome for theological studies at the Angelicum & Lateran Universities.

Father McDonnell has served in various roles throughout his 30 years of priesthood, namely as pastor of the former Our Lady of Mount Carmel Parish (Saint Joseph Marello), Pittston, rector of the Oblates Seminary and the first provincial superior of the newly united USA Province of the Oblates of Saint Joseph, residing at their headquarters in Santa Cruz, Calif. from 2013 – 2020.

Last summer, he returned to his native area to resume his duties as rector of the religious community in Laflin and most recently has been appointed by Bishop Bambera to serve as Sacramental Minister of Our Lady of the Eucharist Parish, Pittston.

This year’s Italian Mass is being offered in memory of all those members and friends of La Festa Italiana who passed away since the last Mass was celebrated, including Ray Alberigi, John “Jack” Brunetti, Christina Caprio, Father Andrew Gallia, Patrick A. Luongo, Joseph “Chef” Schiavone, Kevin Shaughnessy and Father Joseph Sica.

Music ministry for the Italian Mass will be provided by the choir of Saints Anthony and Rocco Parish, Dunmore; accompanied by a brass quartet, all directed by Joseph Moffitt. Dominick DeNaples, mandolin; Patrick Loungo, Nicholas Luongo, Lou Cossa, guitar, and Monica Spishock, timpani, will also accompany.

Ashley Yando-DeFlice is the cantor and leader of prayer. The guest vocalist will be Olivia DiMattio.

The lectors are Heather Luciani and Sister Catherine Iacouzze, MPF. The Prayer of the Faithful will be led by Diane Alberigi, Frank Castellano and Karen Clifford.