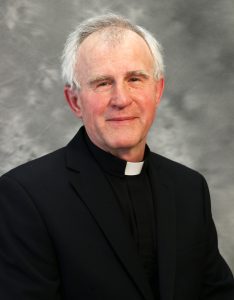 MOUNTAIN TOP — Most Rev. Joseph C. Bambera, Bishop of Scranton, served as principal celebrant of a concelebrated Pontifical Mass of Christian Burial for Father Stephen A. Krawontka on July 26 at Saint Jude Church in Mountain Top.

A native of Poland who was serving as pastor of the parish communities of Ascension in Forest City and Saint Katharine Drexel in Pleasant Mount, Father Krawontka died July 19 at Wayne Memorial Hospital, Honesdale.

He attended the Papal Faculty of Theology in Krakow, Poland, where he completed his theological studies and priestly preparation, and was ordained to the priesthood for the Archdiocese of Krakow on May 22, 1977, by Cardinal Karol Wojtyla, the future Pope Saint John Paul II.

Following 13 years of ministering as a priest in his native country, Father Krawontka came to the Diocese of Scranton in July 1990 and was appointed assistant pastor of Visitation of the Blessed Virgin Mary Parish in Dickson City.

With the consent of the Krakow Archdiocese, Father Krawontka was incardinated in the Scranton Diocese on Nov. 23, 1993, and was eventually appointed in July 1997 as assistant pastor of Saint Joseph Parish, Hazleton, where he served for 11 years.

In July 2008, he was assigned as administrator of the churches of Saint Mary, Our Lady of Perpetual Help, and Ascension of the Lord, both in Mocanaqua, and Saint Martha Church, Fairmount Springs. Two years later, he was appointed assistant pastor at Saint Patrick Parish, West Scranton, where he would also serve as administrator pro tem and Senior Priest.

Father Krawontka received his next assignment in November 2017 to serve as Senior Priest at the parishes of Our Lady Help of Christians, Dorrance, and Saint Jude, Mountain Top. In 2019, Father was appointed as pastor of Ascension Parish, Forest City, and Saint Katharine Drexel Parish, Pleasant Mount, where he remained until his death.

“Did you know that Father Stephen skied with Pope Saint Paul II?” was the intriguing opening line of Father Joseph Evanko’s homily for the funeral Mass of his friend, Father Stephen Krawontka, referring to the Polish priest’s close relationship with the future Pope and Saint who ordained him to the priesthood 45 years ago.

“If I did not start this homily with acknowledging Father Stephen’s connection to Pope Saint John Paul, he would not be happy,” Father Evanko continued, as he recalled Father Krawontka’s treasured photo of then-Cardinal Karol Wojtyla of Krakow laying his hands on the young priest during his ordination.

“Father Stephen had a strong sense of memory and identity when it came to being the shepherd…For him, being the shepherd, as a priest is called to be, very much comes from remembering the culture of our ethnic backgrounds and identifying with whom our parents taught us to be,” Father Evanko noted. “His Catholic Polish heritage trained him with the religious dimension of respect and veneration of not just his parents but all people of faith.”

The homilist remembered that at the time of his parent’s death, Father Krawontka “was a shepherd to my family by reminding us how our faith and tradition provide hope for us.”

Referring to the funeral reading of Saint Paul’s Letter to the Romans, Father Evanko remarked, “Father Stephen believed that we are all brothers and sisters in Christ and when we respect each other and venerate God, as the Commandments demand, we are never separated from the love of Christ.”

Father Evanko proceeded to quote parish Deacon Jim Atherton, who said of the late priest upon his recent passing, “Imagine Father Stephen was ordained by a future Pope and Saint, then came to serve the Diocese of Scranton and went home to God serving the people of Forest City. He lived out the Gospel trying the best he could with the talents that God gave him.”

“In the end, Father Stephen battled cancer…but continued to serve as a shepherd modeled in the memory and identity developed through family, faith and ordination,” the homilist remarked, concluding further, “Pope Saint John Paul II stated, ‘Freedom is not only a gift but a task to be used for the common good.’ Father Stephen you have used your gift well and your task is complete. May you enjoy the slopes of eternal life!”

Interment was conducted at Calvary Cemetery in Drums, Luzerne County.