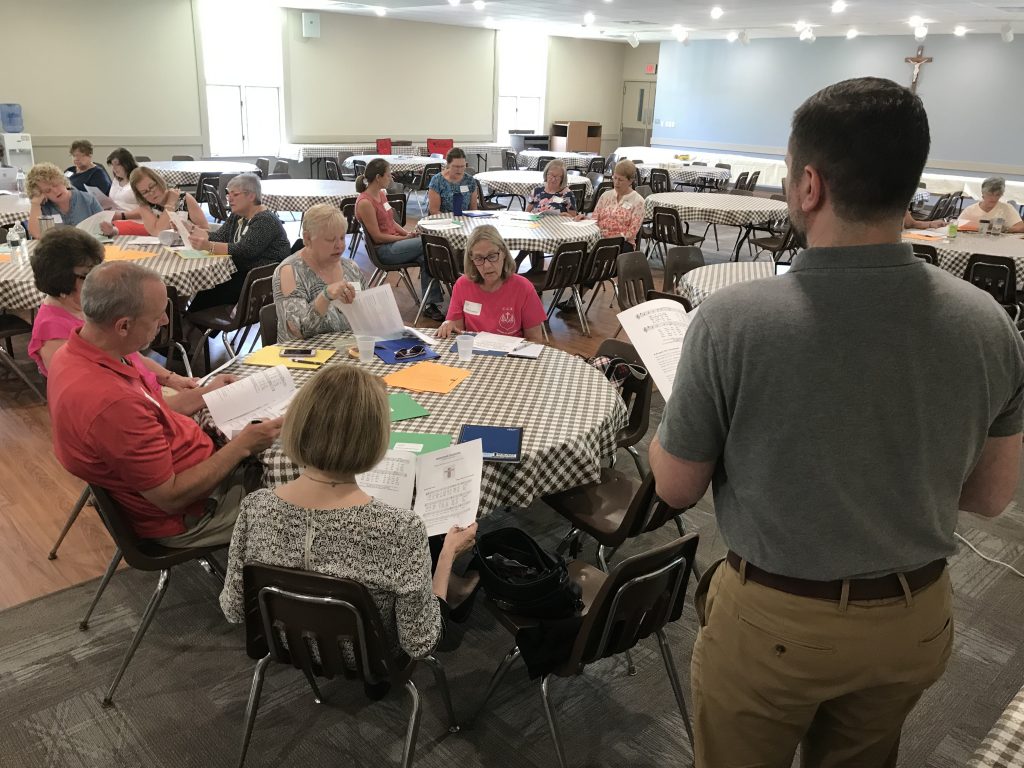 ROARING BROOK TOWNSHIP – With religious education classes poised to resume at many parishes in the coming weeks, the Diocesan Office for Parish Life provided catechists the chance to come together and learn new faith formation tools earlier this month.

Catechist Camp 2019 took place during the week of August 3-9, 2019 at various parishes in every region of the Diocese of Scranton.

“Being a catechist is a tough ministry because you don’t always work on yourself,” Douglas said. “What we are trying to do here is give them a day to work on their faith journey and while they’re working on their faith journey, bring back practical things they can do in the classroom with their kids.” 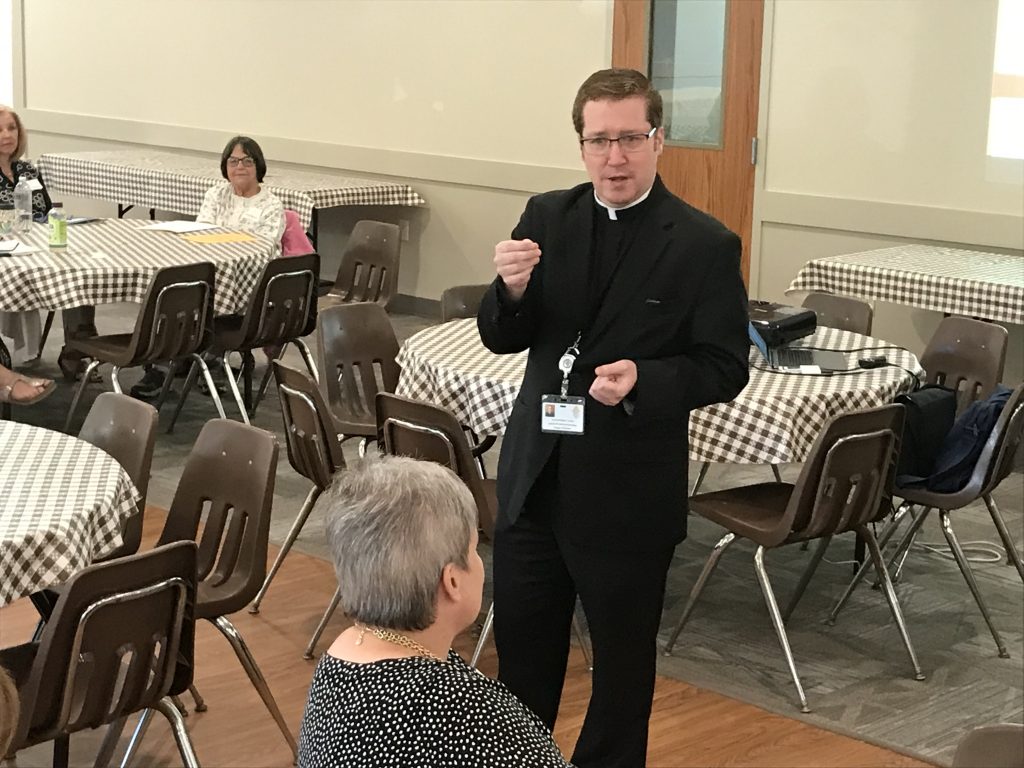 “While we’re trying to make their job a little bit easier, we’re also trying to fill them up and give them a day to have an encounter with Christ,” Douglas said. “What is better than to talk with somebody that knows exactly what you’re going through? They know your struggles but they know your joys!”

At the session at Saint Eulalia Parish, catechists from a number of parishes in Lackawanna and Wayne counties got a chance to take part in interactive sessions.

“I usually learn at least one or two really important aspects that I can take back and share with my catechists and it invigorates me. It gets me started for the new year. It energizes me! It gets me back on track,” Mary Kennedy of Blessed Virgin Mary Queen of Peace Parish in Hawley said. 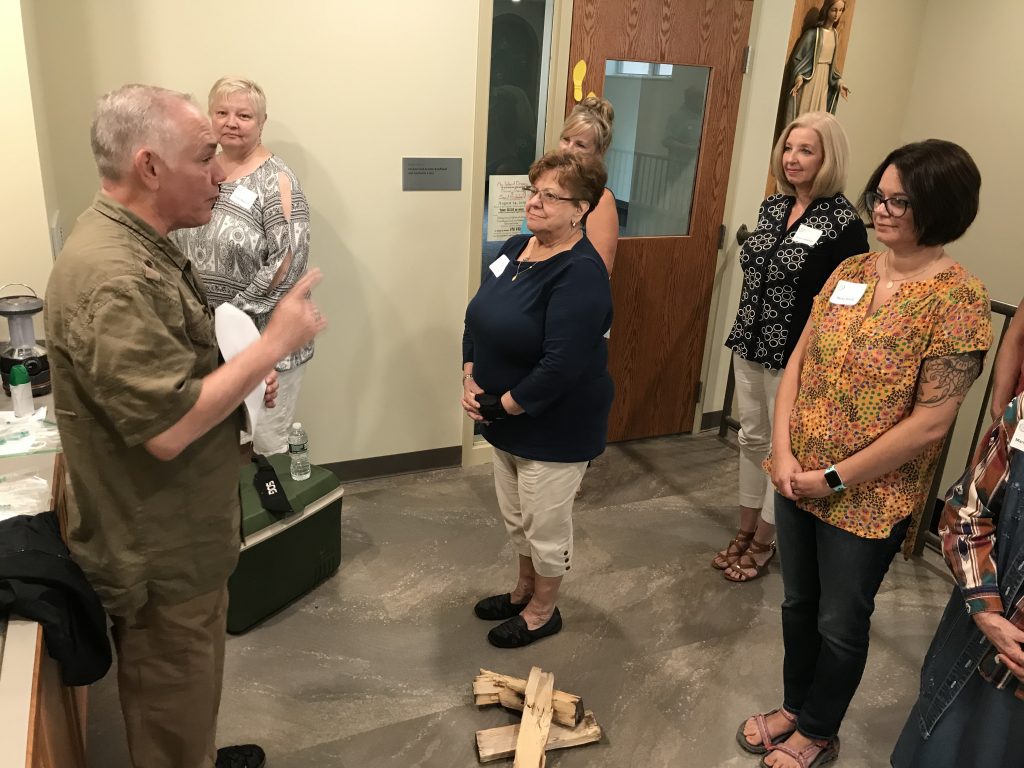 Kennedy said she came to Catechist Camp looking for inspiration and confidence and learned a lot from the event.

“There’s a lot of sharing that goes on. People will give ideas or suggestions that I may not have thought of because we’re all so diverse. I learn as much from the other people attending as I do from the presenters!” Kennedy added.

As she gets ready for her second year teaching religious education, Becky Rinella of Saint Thomas More Parish in Lake Ariel decided to attend Catechist Camp.

“It’s nice to see what other people do, get some more input and different ideas,” Rinella said.

Rinella, who also teaches high school, attended Catechist Camp because she wanted to meet new people and get some questions answered.

“I came last year and it was a lot of fun. It’s nice to see what other people do and you can always learn something new!” Rinella said.

Some of the breakout sessions during this year’s Catechist Camp focused on social justice issues like the death penalty, creating mission trips with a purpose and finding the extraordinary in ordinary life.

Father Brian J.T. Clarke also presented a general session to all attendees titled, “To Every Creature: Preaching the Good News to All.” Father Clarke highlighted the upcoming Extraordinary Mission Month in October. The theme chosen by Pope Francis is “Baptized and Sent: The Church of Christ on Mission in the World.”

“We’re hoping this is something the catechists and DRE’s (Directors of Religious Education) really embrace. They can really take what Father Clarke is speaking about and really bring it back and really make it an important month in the curriculum year for their classes,” Douglas said.

As the new year of religious education begins for the region’s youth, catechists like Mary Kennedy say she feels blessed to work with children.

“It is truly a gift from God and he has called me to do it and I am honored and thrilled to have the opportunity,” Kennedy said.