Bishop to ordain three men to the Priesthood on June 27 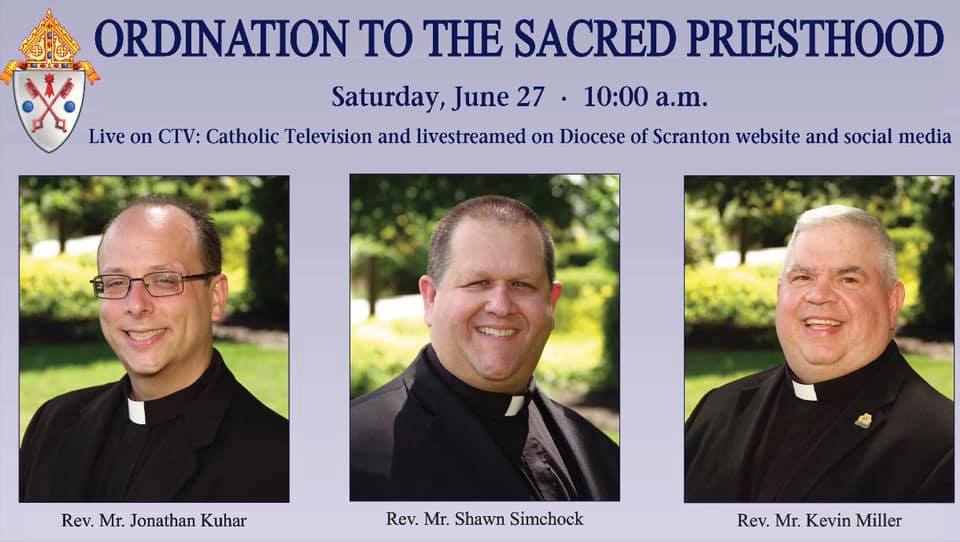 SCRANTON – After years of spiritual, academic and pastoral formation, three native sons of the Diocese of Scranton will be ordained to the priesthood this weekend.

“I’m tremendously excited to begin. We had a little delay in the ordination date due to COVID-19 but I’m ready,” Simchock said. “Six years of hard work comes down to this point when we get ordained and I am ready to go to work for the people of the Diocese of Scranton.”

While the ordination Mass will be a time of tremendous celebration, due to the coronavirus, seating inside the Cathedral will be limited to invited guests. Due to the ongoing health emergency, social distancing measures will still be in effect. Dozens of family members and clergy are still expected to be present.

“I’m actually very grateful that we’ve been able to open it up for as many people as we’ve been able to, that some family members and close friends and people I’ve known over the years and have been part of this journey are going to be able to be there personally and be there in attendance,” Miller said.

For those not able to attend in person, the ordination Mass will be broadcast live on CTV: Catholic Television and a livestream will also be provided on the Diocese of Scranton website and social media pages, including Facebook, YouTube, Twitter and Instagram.

Deacon Kuhar completed his preparatory studies for the priesthood at Saint Mary’s Seminary and University in Baltimore, Md.

While all three men had their final weeks of seminary impacted in varying ways by COVID-19, each said they were able to gain something from this unprecedented time.

“I’ve been able to spend more time in prayer, being able to reflect on life, the Church and God’s role in our lives,” Kuhar said.

In an effort to get to know what led each man to the priesthood, The Catholic Light conducted interviews with each of the future priests.

Deacon Kuhar, 36, of Mountain Top, is the son of Joan Kuhar and the late Gerald Kuhar. He is a member of Saint Jude Parish in Mountain Top.

Growing up, Mr. Kuhar says faith was very important to his family.

“My father died when I was six years old. He and my grandfather were taking a small recreational fishing boat from Block Island to Long Island for the winter and the boat sank around Thanksgiving in 1989. That was certainly a difficult time for our family,” Kuhar said. “Our relationship with God, our relationship with the parish, our relationship with Saint Jude Elementary where we were going to school was hugely important in helping us get through a very traumatic period in our lives.”

Kuhar says his mother was the most influential person on his faith journey. She would often elbow him while at Mass and tell him that the church needed good priests.

“Early in life, I always thought about it as a possibility,” Kuhar said in reference to becoming a priest. He eventually went to college, law school and opened his own law firm in Luzerne County. Along the way, Kuhar said he made a deal with God that if he passed the bar exam and worked for a while, he’d eventually consider the question about becoming a priest again.

It took some time for Kuhar to have an important realization.

Fast forward to this moment in his life, as he prepares to be ordained a priest, Kuhar says he is looking forward to being a pastoral presence for the faithful in the Diocese of Scranton.

“Being a part of their lives, in both the joys and sufferings, to be present to parishioners and help them walk this path in life,” Kuhar said.

Deacon Kevin M. Miller has also had an untraditional route to priesthood.

The Wilkes-Barre native, son of Maureen Miller and the late Ronald Miller, first felt the call to the priesthood when he was 12 years old.

Now at the age of 55, Miller is humbled to take on this new role.

“I want to thank Bishop Bambera and all the folks who are involved in formation…They took a chance on me. They saw something in me and prayed over it and encouraged it,” Miller admitted.

Miller says growing up in the mid-1970s, he fell in love with the life of the Church.

“I loved the solemnities of the Triduum for Holy Week, the incense, the procession of the kids,” Miller said. “I get chills just thinking about it. That experience really deepened within me a sense that this could be a life that God is calling for me and I knew it was something I wanted to look at.”

At the age of 18, Miller applied to the University of Scranton with a dream of becoming an Army chaplain. Unfortunately, financial obstacles with the Army got in the way, so Miller ended up getting a degree in chemistry.

“That whole time, the idea of being a priest never really left me,” Miller admitted. “I always said to myself, ‘when the time comes, and God you know when that is, I’m open for you to lead me where you want me to go.’”

As he now looks forward to the priesthood, Miller said celebrating the Eucharist and sacraments will be especially important to him.

Miller said he is especially looking forward to “being with people at those ‘thin moments’ when the layer between God and us is not all that thick. Those are the experiences of the sacraments, the birth of a child, the baptism, commending a soul into the hands and mercy of God, celebrating a funeral.”

Deacon Shawn M. Simchock echoed the thoughts of Mr. Miller when it comes to the importance of celebrating the sacraments with the faithful.

The 44 year old Hazleton man, son of the late William and Janet Simchock, points to the experience of his mother’s illness as a formative moment in his path to the priesthood.

“I remember sitting there, watching my mother’s anointing when she was ill. To see what it does for a person, there are no words that I can use to describe it. It’s just a peacefulness that comes over someone and to know that you have a little role in helping a person along in their final journey is truly amazing,” Simchock said.

Simchock added that from an early age, his family stressed the importance of faith.

When people would ask Simchock what he wanted to do when he grew up, the future-priest always indicated that he was going to be ordained one day. Simchock said it just took him a little while to answer the call.

During this weekend’s ordination Mass, Simchock says several questions will be going through his mind when he is laying in front of the altar, invoking the intercession of the saints. Among them will be, “I can’t believe this is happening, God picked me, why did God pick me?”

As he prepares for this next step in his life, Simchock summed up his emotions and feelings in just a few simple words.

“I want to be the best priest that I can possibly be for the people,” Simchock said.