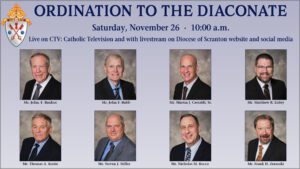 SCRANTON – The Most Rev. Joseph C. Bambera, Bishop of Scranton, will ordain eight men as permanent deacons for the Diocese of Scranton at 10 a.m. on Saturday, Nov. 26, 2022, at the Cathedral of Saint Peter in Scranton.

The newly ordained deacons will join the ranks of clergy who minister to the faithful in parishes and other settings throughout the Diocese.

“It was not something I had ever anticipated,” Eisley said. “By God’s grace and the path that he’s led me on over the years, I’ve found myself in this position.”

These men will complete a five-year formation program and become members of the three-fold ordained ministry that consists of bishops, priests and deacons.

All of the candidates said the diaconate program helped them discern their vocation to ministry, deepen their relationship with the Lord and model their lives after Jesus.

“The instructors were phenomenal,” Kostic, who has a theological background and has been in the education field for 33 years, said. “I learned more than I ever thought I could.”

Over that time, the eight men have grown not only in faith, but also in friendship.

“The men that I have been on this journey with have been absolutely incredible. They are just a testament to the faith. I have grown so much by just watching them and admire them,” Rocco said.

The deacon’s service has three aspects: word, worship and charity. He can perform certain ministerial functions such as administering baptism; serving as the deacon at the Mass, including proclaiming the Gospel, preaching the homily and distributing Holy Communion; bringing viaticum to the sick; presiding at wake services, funeral liturgies and burial rites and with permission by the pastor, may celebrate the Sacrament of Matrimony.

Deacons also minister to the needs of families, single parents, students, the aged and infirmed, the imprisoned and those who suffer from poverty or addictions.

When asked what drew him to the diaconate, Zeranski said it is that ability to serve others.

Miller, who already regularly visits two homebound parishioners at his parish, Our Lady of Victory in Tannersville, is looking to expand those opportunities.

“In one case, I’m the only person that she sees other than her son. She really doesn’t have any other visitors,” Miller stated.

Bubb, who will celebrate his 25th wedding anniversary on the same week of his ordination, feels a calling to help young families.

All are welcome to attend the Ordination Mass at the Cathedral of Saint Peter. For those unable to attend in person, CTV: Catholic Television of the Diocese of Scranton will provide a live broadcast of the Mass.

A livestream will also be available on the Diocese of Scranton website, YouTube channel and across all Diocesan social media platforms.

The following are brief biographies of the Permanent Deacon Class of 2022:

John F. Bankus, 62, of Wyoming, is a member of Saint Elizabeth Ann Seton Parish in Swoyersville. He is married to his wife, Judith, for 32 years and the couple has one child.

He subsequently received an Associate of Science degree in electrical engineering from Penn State University, Wilkes-Barre, and his bachelor’s in economics from King’s College in Wilkes-Barre.

The deacon-candidate currently is an asset integrity specialist with Williams Company.

Montoursville resident John F. Bubb, 58, and his wife, Donna, are celebrating their 25th anniversary of marriage this year and are the parents of seven children.

A 1982 graduate of Williamsport Area High School, he earned his bachelor’s degree in accounting from Penn State University in State College in 1986 and completed studies for a Master of Business Administration degree from Northern Alabama University in 2010.

Martin J. Castaldi, 59, and his wife of 33 years, Renée, reside in Scranton, where they are members of Divine Mercy Parish.The couple has four children.

The deacon-candidate is a 1981 graduate of Scranton Central High School and received his baccalaureate degree from Penn State University. He subsequently received his master’s in business administration from Marywood University in Scranton.

Castaldi is 32-year veteran of the United States Postal Service. Following his retirement as postmaster of the Carbondale Post Office he has been serving as head sacristan/maintenance supervisor at the Cathedral of Saint Peter in Scranton.

Jersey Shore resident Matthew R. Eisley, 44, has been married to his wife, Molly, for 20 years and are parishioners of Saint Luke Parish. They are the parents of three children.

After graduating from Montoursville Area High School in 1996, he obtained his bachelor’s degrees in chemistry and secondary education in chemistry from Lock Haven University.

The ordinand for the diaconate later received his Master of Science degree in instructional technology from Bloomsburg University in 2006.

Eisley currently serves on the faculty for the South Williamsport Area School District as a chemistry teacher. He previously taught at the Pennsylvania College of Technology as an adjunct instructor.

Deacon-candidate Thomas A. Kostic, 67, serves the Diocese of Scranton as principal of Holy Family Academy elementary school in Hazleton.

Members of Saints Cyril & Methodius Parish, Hazleton, he and his wife of 35 years, Patricia, reside in Hazleton and have one child.

Kostic graduated from Bishop Hafey High School in 1973, after which he earned his bachelor’s degree in social work, with a minor in criminal justice, from King’s College, Wilkes-Barre.

For the following five years, the future deacon attended Officer Training School for the United States Air Force, attaining the rank of captain. During that time he also received his master’s degree in public administration from Troy State University in Alabama.

Kostic has pursued further graduate studies in philosophy and theology at Catholic University and the Washington Theological Union, both in Washington, D.C., and in theology at Marywood University, Scranton.

A member of Our Lady Victory Parish in Tannersville, Steven J. Miller, 60, resides in Tannersville with his wife, Karen. The couple has been married for 37 years and are the parents of two children.

Following graduation, he attended Lock Haven University and began studies in computer science and mathematics. He received his Bachelor of Science degree in 1984.

Miller is employed as senior project manager for DXC Technology.

Nicholas M. Rocco, 49, and his wife of 17 years, Adeline, reside in Jefferson Township and are parishioners of Saint Eulalia Parish, Roaring Brook Township. They have four children.

Having graduated from Mid Valley High School, Throop, in 1991, Rocco received both his associate’s and bachelor’s degrees in nursing from Penn State University. In 2006, he earned a Master of Science in nurse anesthesia from The University of Scranton.

Rocco graduated from the Anesthesia Business Group Executive Management program at the Wharton School of the University of Pennsylvania, Philadelphia, in 2019 and plans to receive his master’s degree in pastoral studies next year from the Pontifical College Josephinum.

Rocco currently serves as a nurse anesthetist for Geisinger at the Northeast Surgery Center.

Deacon-candidate Frank H. Zeranski, 63, has been married to his wife, Jayne, for 39 years. The Jefferson Township residents are members of Saint Catherine of Siena Parish in Moscow.

Zeranski is a 1977 graduate of North Pocono High School and earned his certificate in electronics technology from Lackawanna County Vocational Technical School in Scranton.

He subsequently received his associate’s degree in computer science and bachelor’s degree in business administration from Keystone College in La Plume.

He is employed by RS Integrated Supply in Radnor as an application support representative in the Information Systems Department. He also serves as a site coordinator, instructor and rider coach for the PA Motorcycle Safety Program.