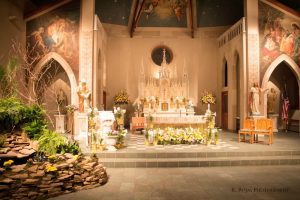 DUSHORE – Most Rev. Joseph C. Bambera, Bishop of Scranton, will serve as the principal celebrant for a Mass of Thanksgiving at Saint Basil’s Church, Dushore, at 4 p.m. on Saturday, Sept. 17, 2022.

The Mass will commemorate the 150th anniversary of the first Mass offered in the present church. While the actual anniversary took place in 2021, due to the COVID-19 pandemic, a decision was made to delay a public celebration until this year. Father Thomas J. Major, Pastor, Immaculate Heart of Mary Parish, will concelebrate the Mass. A dinner will be held in Saint Basil’s Hall following the Mass.

Immaculate Heart of Mary Parish has established a committee of volunteers to help prepare for the Sesquicentennial celebration. The committee is handling reservations, decorations and the dinner following Mass.

“As we prepare to gather in prayer to celebrate the Eucharist together, we will be celebrating the entire community of faithful Catholics who have made Saint Basil’s Church their home for 150 years,” Bishop Bambera said. “Over all of that time, the people of Sullivan County have done Christ’s work by celebrating life, teaching people about our faith, feeding families, clothing the poor and converting hearts to the Lord.”

The beginning of Catholic life within the present boundaries of the Diocese of Scranton can trace its roots back to the Dushore-area of Sullivan County. The first two Catholic settlements in northeastern Pennsylvania were near Silver Lake Township, Susquehanna County, and along the Loyalsock Creek in Sullivan County. Both settlements preceded anthracite mining and the logging, lumbering and tanning industries.

The history of Saint Basil’s Church itself dates back to the early 1800s.

In the 1830s, numerous Catholic settlers lived along the Loyalsock Creek but they did not know how to establish a Catholic Church. In 1836, one of the settlers contacted Rt. Rev. Francis Patrick Kenrick, then Bishop of Philadelphia, asking him to visit the people of Dushore.

When the visit took place, Bishop Kenrick advised the people to buy enough land for a cemetery and clear a place for a small chapel. Two years later, the work was complete.

The first Church of Saint Basil’s was a small log chapel, which was dedicated on July 4, 1838. Priests would visit Dushore to celebrate Mass periodically until 1852 when Father James McNaughton was appointed the first resident pastor.

As the congregation continued to grow, the building of a new church was authorized.

The cornerstone of the present church was set by the Most Rev. William O’Hara, Bishop of Scranton, on Oct. 28, 1868. The first Mass was celebrated in the church on the Third Sunday of Lent, March 12, 1871. Bishop O’Hara celebrated a dedication Mass for the church on Sept. 7, 1873.

The church was built of native stone that was quarried about four miles from Dushore and hauled by the parishioners and their neighbors by teams of oxen. The lime was brought 40 miles via horses.

The church was not fully decorated and furnished until 1876 when the frescoes were completed and the pews were installed.

In 1878, the first Fourth of July parish picnic took place and in 1879, the church steeple was erected and the church bell installed.

Many improvements have been made to the physical properties of Saint Basil’s over the years, which include a church renovation in 1960 in which major improvements were also made to the rectory and the cemetery was reorganized. The church also sustained damaged when an EF-1 tornado, with maximum wind speeds of 110 mph, hit Dushore on April 15, 2019.

There have been many vocations to the religious life from Saint Basil’s Church over its history including numerous priests, several brothers and dozens of nuns.

“Our parishioners have so much to be proud of, just as their forefathers had when they attended that first Mass on that third Sunday of Lent in 1871,” Father Major said. “Without so many faithful people there would be no celebration. This anniversary celebration will remind us all that we are joined together by our Baptism into Christ and we continue to be bound together through His presence in the Eucharist.”

All are invited to attend the Mass of Thanksgiving that will be celebrated by Bishop Bambera on Sept. 17, 2022. Anyone who would like to attend the dinner following Mass should contact the parish office at (570) 928-8865 or email ihmparish@ptd.net.