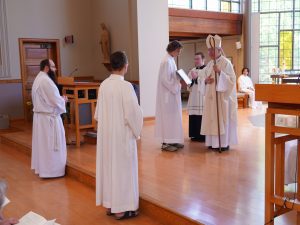 SCRANTON – Two seminarians in the Diocese of Scranton have each taken one-step closer to the sacred priesthood after receiving Admission to Candidacy for Holy Orders from the Most Reverend Joseph C. Bambera, Bishop of Scranton.

The Rite of Admission to Candidacy for Holy Orders for William A. Asinari and Andrew T. McCarroll took place at Marywood University on Monday, June 20, 2022, during the annual Quo Vadis Days summer camp.

“I’m overwhelmed in a really, really good way. I think God’s peace has flooded my heart,” Asinari said following Mass that included the Rite of Admission. “I’m just looking forward to seeing the beautiful growth to come out of this.”

Asinari and McCarroll entered formation together six years ago.

“It has bene a six year journey together and to be able to stand next to each other and to say that the Church is serious about us being in formation and being priests for local service in the Church of Scranton and we’re serious about that commitment too. It really is a joyful moment and a moment of brotherhood for Bill and myself,” McCarroll added.

The Rite of Admission to Candidacy for Holy Orders is celebrated when a man has reached a maturity of purpose in his formation and demonstrated the necessary qualifications for ordination to the diaconate. In the presence of the bishop, each man publicly expresses his intention to complete his preparation for Holy Orders and also his resolve to fully invest himself to that end, so as to best serve Jesus Christ and his Holy Church.

When asked what keeps him moving forward on his vocation journey to the priesthood, Asinari said the answer is easy.

“The grace of God, His Grace and His love and the way He has guided me to this point. I’ve always almost seen myself like a little child holding onto God’s hands and whenever it gets frightening or turbulent, just holding tighter and tighter and just following him. That is what gets you through it,” he explained.

This year, the Rite of Admission was held during the annual Quo Vadis Days, so dozens of high school students interested in learning more about their own vocations journey got to participate in the Mass.

“I think it was good to have young men here who are asking the same questions that we were asking six years ago and we’re continuing to ask – and just for them to see us step forward and say we’re serious about this,” McCarroll ended by saying.