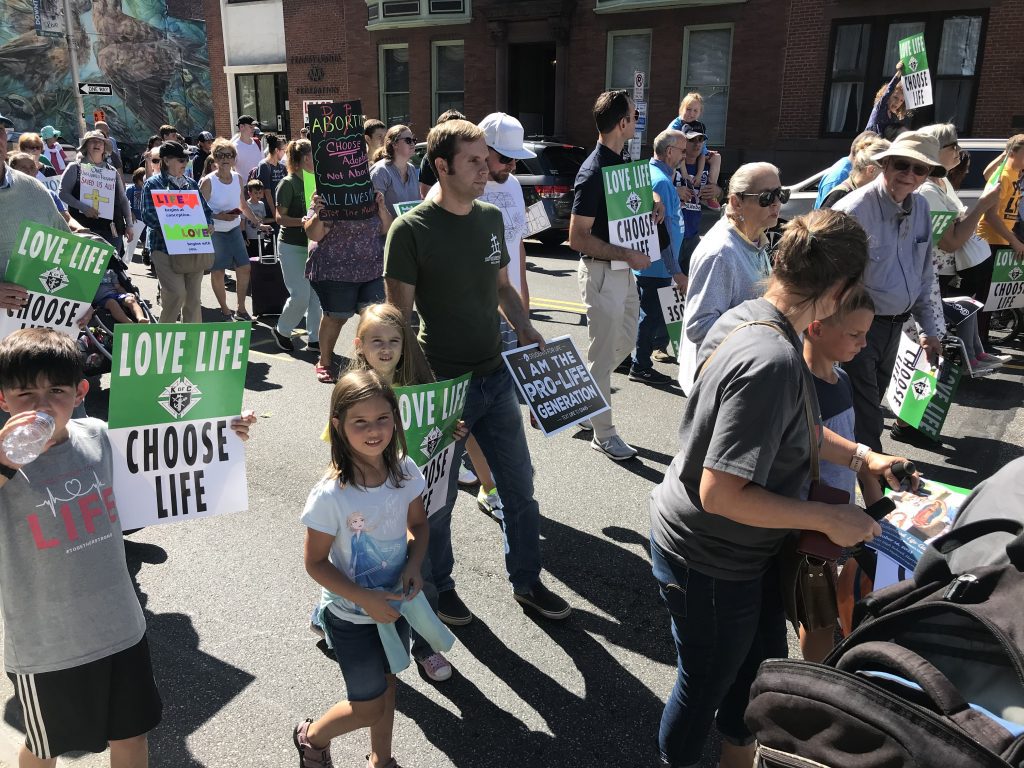 HARRISBURG – More than 3,000 pro-life supporters gathered at the Pennsylvania Capitol on Sept. 27 to send a strong message to state lawmakers, urging them to protect unborn children by passing legislation to further restrict abortion. Many elected leaders in attendance say the crowd was among the largest they have seen in recent memory.

“Life is sacred and we need to fight for the right to live, the right to be born,” Gabriel Petrofsky of Wellsboro, Tioga County, said.

The crowd came from every corner of the Commonwealth, including many from the 11 counties of the Diocese of Scranton.

“I volunteer at the Pregnancy Resource Center of Greater Hazleton and our director asked if we wanted to come and I wanted to bring my son so he could be more involved as well,” Grace Bott of Nuremberg, Luzerne County, said. “We came with a bus group. There are several of us from the Resource Center that are here as well.”

The crowd was so large that the group not only filled the Capitol steps and surrounding lawn, anti-abortion activists spilled out onto North 3rd Street. The Pennsylvania Family Institute, based in Harrisburg, partnered with March for Life to host the rally.

Many in the crowd had very personal reasons for attending the event. 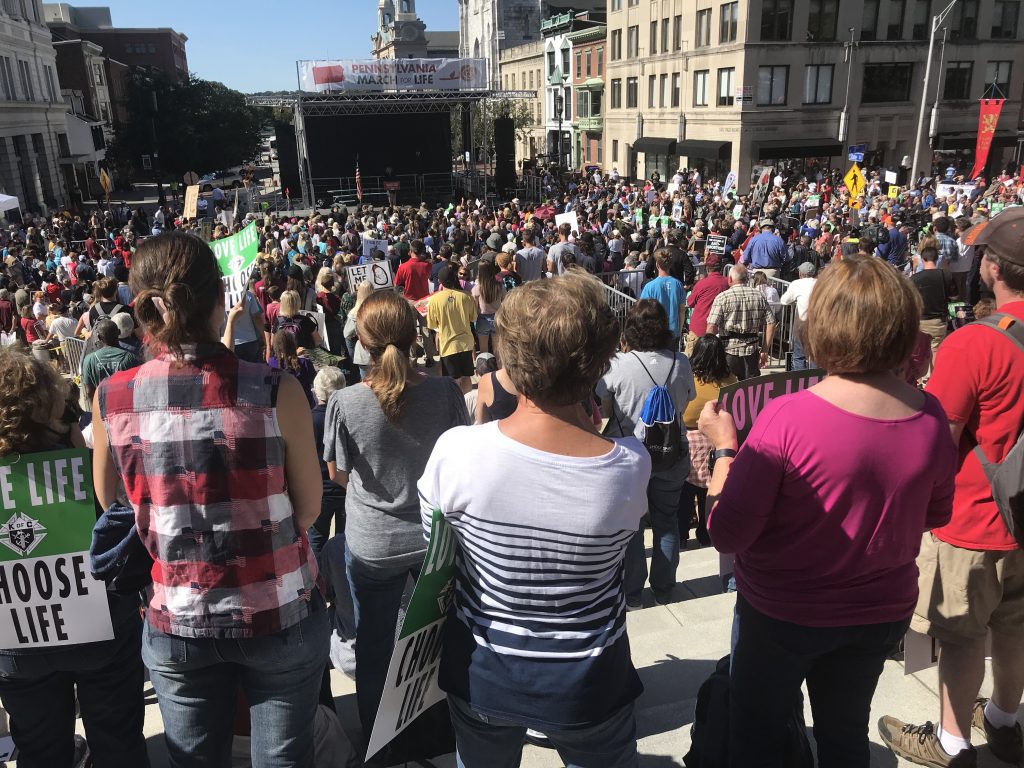 “The doctor told my parents that I wasn’t alive several months before I was born and they chose to not listen to the doctors,” Kevin Costello of Tunkhannock, Wyoming County, said.

Costello took the day off from work so he could drive more than two hours to attend the rally. He was excited to see such a large crowd of people dedicated to respecting life.

“They’re here because their heart is moved to support the most precious and vulnerable population we have, which is the unborn,” Costello added.

Carol Carlini of McElhattan, Clinton County, took a bus to the Capitol with a group from the Williamsport area.

“I thought the crowd was tremendous. It’s wonderful to feel the spirit of Jesus here with so many people, honoring what he said and that is ‘do not kill.’ We just don’t want to see abortion go on any longer,” she explained.

Carlini attended the rally with her adopted daughter Madison. 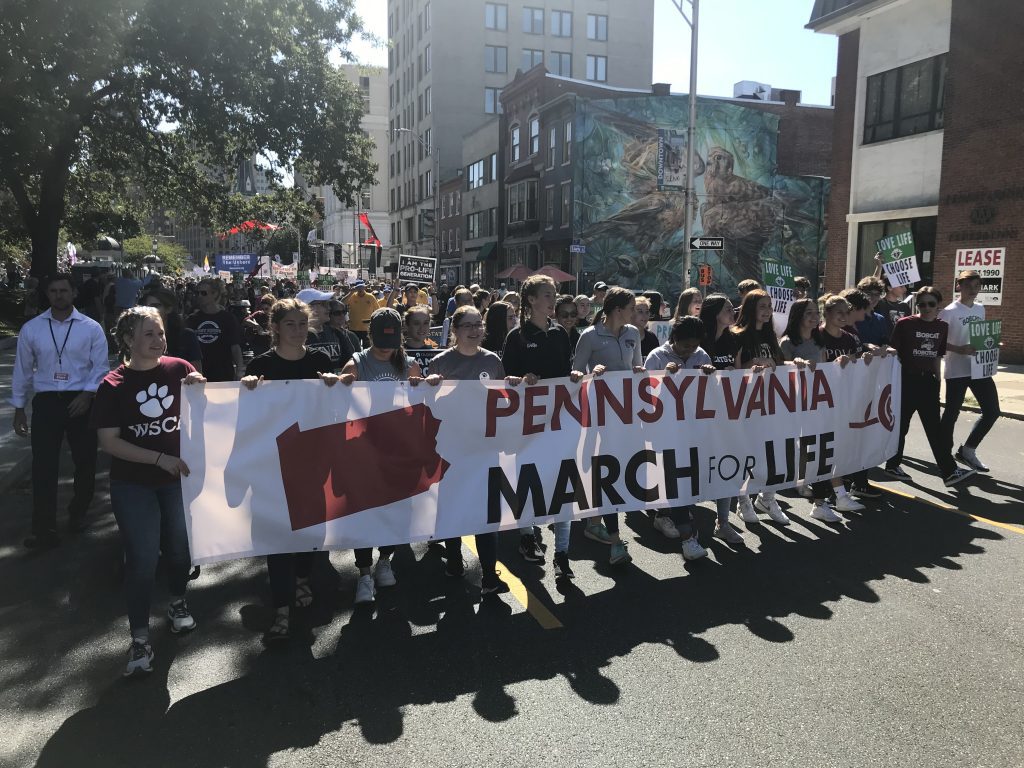 “God put our family together. Her mother, who was a college student, could have aborted but she didn’t. She carried Madison for nine months and I’ll forever be grateful,” she said. “We have a family because that woman decided to carry her. I’m just forever praising Jesus and letting everyone out there know there are options, there is help, there are other choices to abortion.”

Prior to marching around the Capitol, numerous speakers addressed the crowd.

Surrounded by members of the Republican caucus, House Speaker Bryan Cutler, R-Lancaster, took the stage at the rally to loud cheers as he said, “We hear you loud and clear. Life begins at conception.”

He was joined by Senate Majority Leader Kim Ward, R-Westmoreland, who reaffirmed her stance for protecting life by leading the crowd in large cheers of “We are pro-life.”

Pennsylvania currently allows abortions up to 24 weeks of pregnancy for any reason except to select a gender. Anyone under the age of 18 is required to have permission of a parent or guardian. 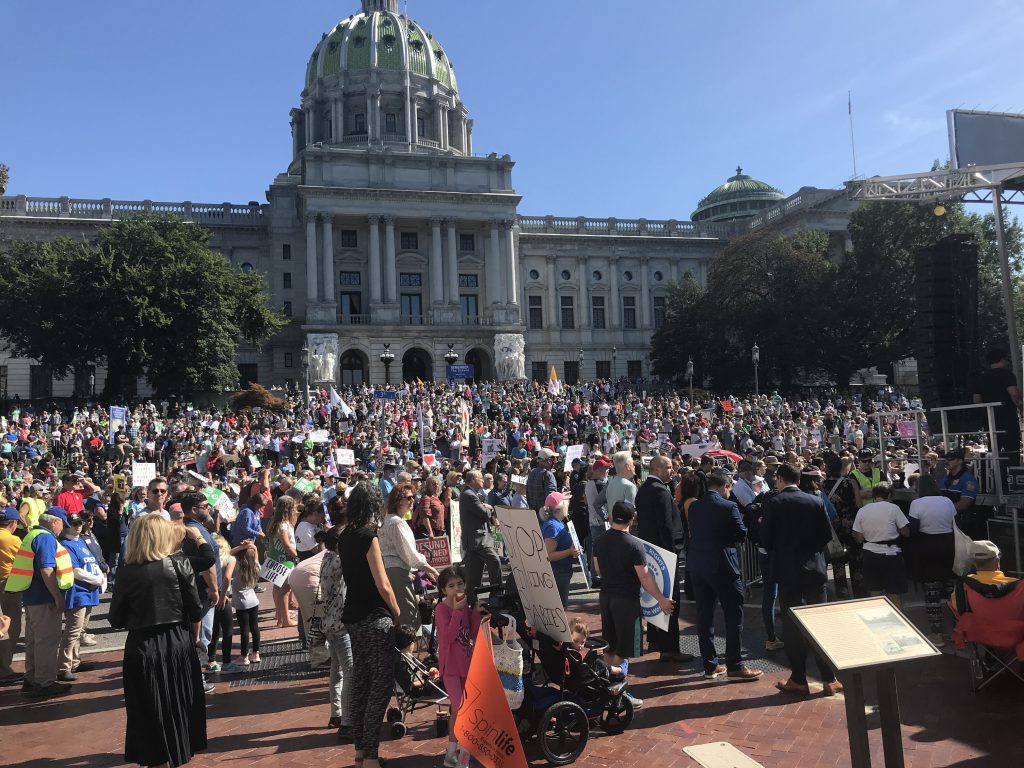 Gov. Tom Wolf, a Democrat, has vowed to veto any bill that restricts a woman’s reproductive rights.

In response to rally and March, Wolf tweeted the first-ever Pennsylvania March for Life was just an anti-woman rally by a different name.

“As I have said before, so called ‘pro-life’ policies are actually anti-choice,” Wolf added in a written statement. “As governor, I have vetoed three anti-choice bills that have come to my desk. Make no mistake, I will veto any others.”

As the thousands of marchers took to the street, they were undeterred in having their voice heard.

“There are a lot of people who value what God values, which is every life, from the start of conception to the end,” Lauren Owlett of Morris Township, Tioga County, said.