Rooted in faith, future bishop remains down to earth 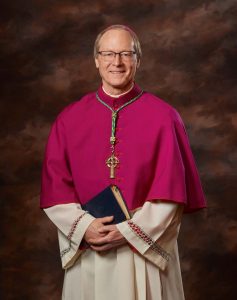 CARBONDALE – Having travelled all over the world to help the less fortunate on mission trips, Father Jeffrey J. Walsh is now preparing to travel to Michigan for what is arguably his biggest mission yet.

The Episcopal Ordination and Installation will take place at 2 p.m. at Saint Mary, Our Lady of Mount Carmel Cathedral, Gaylord.

Even though it has been nearly two months since the appointment was announced, Bishop-elect Walsh still feels a sense of amazement.

“I understand it as something that is necessary for my salvation, that God must see it as a way I need to follow in order to get to heaven but I also see it as a great challenge,” Bishop-elect Walsh said in a recent interview with The Catholic Light.

Ordained as a priest for the Diocese of Scranton in 1994, Bishop-elect has spent 27 years serving the faithful of northeastern Pennsylvania with a humble heart and deep devotion to God.

“I love northeast Pennsylvania. I grew up here. I know every nook and cranny and have been through every aspect of its natural beauty and all the other aspects of Church life,” he added. “I’ve loved every minute of it, even in the difficult times.”

When he was a teenager, Bishop-elect Walsh freely admits he wanted to become a truck driver, not a diocesan priest. It wasn’t until attending a weekend retreat while attending The University of Scranton that he began delving deeper into his faith.

“I found myself at a place where I wanted to learn more and I saw my peers interacting with faith at a deeper level,” Bishop-elect Walsh said.

Walsh grew up in an Irish Catholic household in Scranton. The church played an important role in his life.

“I understood the proper place that the Church played in our lives, going to Mass every Sunday, going to CCD during the weekdays, serving as an altar boy and then just trying to be a good person, knowing that my parents and grandparents were good role models. They were involved in civic organizations, they worked hard. They had disciple in the home,” he said.

After graduating from college, Bishop-elect Walsh said three things came together in an unexpected way which led to him joining the seminary. He admits he wasn’t happy in the job that he had, a relationship he was in during college ended and the death of his grandmother showed him that a priest does a lot more than just celebrate Mass.

“When my grandmother died unexpectedly, a young priest came to visit her in the hospital and when I saw what he did there, that fleshed out for me what a priest does … he brings comfort and peace and prays with people and (he) brought us a great sense of relief during that very difficult time,” he explained. “As I started praying about it and thinking ‘What is God saying to me through these things,’ the option of entering into the seminary became one of those realities.”

During his 27 years as a priest, Bishop-elect Walsh has held many administrative and pastoral responsibilities, but he says spending time with young adults has been among the most important.

“I looked at those experiences of being with young people as a way to, first of all, draw them into a faith that I saw myself lacking and then finding, and I wanted to be a part of them finding it too because I thought it was exciting to experience that,” he explained.

Bishop-elect Walsh has been involved with more than 20 mission trips – some as far away as Thailand – and has traveled to multiple World Youth Days.

“I draw energy and strength and joy and love from being around young people,” Bishop-elect Walsh explained, emphasizing the love that many young adults show for Mass, adoration, confession and faith sharing groups. “I hope until the day I die I enjoy the company of young people just because of the mutual benefit I think it has.”

When he is not fulfilling his priestly responsibilities, Bishop-elect Walsh can often be found outdoors. He has often used his love of nature to help whatever parish he has been assigned to.

“It started with running the Steamtown Marathon. I was at Saint Mary of the Lake in Lake Winola and we needed a new rug. I thought, myself I could get people to sponsor me by the mile. I would run the race and see what happens. We called it the ‘Run for the Rug,’” he explained.

That began multiple opportunities to tie together physical exercise and parish fundraising. He subsequently biked from Maryland to Tunkhannock to raise money for windows in a parish hall, and swam the four mile perimeter of Lake Winola to raise money for a new entranceway for his church.

During his most recent pastoral assignment, Bishop-elect Walsh raised $20,000 to renovate the steeple at Saint Rose of Lima Parish in Carbondale by walking the route of the Steamtown Marathon.

“I’ve always loved exercise and I love being active and I thought if I can marry that with opportunities for fundraising for a parish, it’s been successful so I’m grateful for that,” Bishop-elect Walsh said.

Nearly everywhere Father Walsh has gone for more than a decade, his beloved dog, Sam, has been by his side. Sam will, of course, move to Gaylord as part of the episcopal transition.

“I can read his mind. He can read my mind,” Bishop-elect Walsh admits.

“I was looking for a dog and I found a rescue organization that was bringing puppies up from Tuscaloosa, Ala., from a kill shelter and it was a match made in heaven,” he added. “I named him Sam because it was the anniversary of 9/11 and I wanted to think of something patriotic to call him so I thought of Uncle Sam and that’s how he got the name Sam.”

With every assignment, Sam has been an ambassador for the church in his own rite. Immediately after learning of his episcopal appointment, when Bishop-elect Walsh couldn’t tell anyone, Sam also became his owner’s trusted confidant.

“Sam was my great comfort for those days when my mind was reeling over all the changes and responsibilities that were coming,” he said.

PREPARING FOR THE FUTURE

As he prepares to assume responsibility for the 21 most northern counties of Michigan’s lower peninsula, and the 44,000 Catholics in the Diocese of Gaylord, Bishop-elect feels confident in his abilities because of his priestly experiences in the Diocese of Scranton.

“They’ve given me a good, broad vision of Church and what typically happens in the life of a local church, at the parish level and diocesan level. I’ve been tremendously inspired and edified by so many in the Diocese of Scranton,” the future bishop said.

When asked about his vision for the future, he answers simply, that it is the “vision of the Gospel.”

“To be Church in a way that we see and read about in the Scriptures,” he explained. “To me, what I keep going back to in prayer, is a sense of the early Church and needing to be able to live the life of the Church with that original sense of excitement and challenge of the Gospel.”