SCRANTON – Just minutes before being ordained a Deacon – as Michael J. Boris laid on the floor of the Cathedral of Saint Peter – five words from the Litany of Supplication really caught his attention.

As the crowd of several hundred prayed to all of the saints, asking for God’s blessing on the Dallas native, Boris said he was struck by the words: “Lord, deliver us we pray.”

“I found myself really saying that from the heart. I think it was the spirit speaking within me to say, Lord, deliver us so that we may experience the Joy of the Gospel, deliver us from our failings and our fears,” Boris said in an interview with The Catholic Light directly following his Ordination Mass.

Boris, 26, was ordained as a transitional deacon on May 28, 2022, the ordination serving as the last major step before ordination to the priesthood, which typically occurs a year later after additional pastoral, liturgical and educational preparation.

“It really does feel unreal, I know it’s cliché to say that, but it is such a simple moment when the bishop lays his hands on your head and says the Prayer of Ordination. The Holy Spirit is working in powerful ways and I’m trusting that,” he added.

During the Ordination Mass, Boris was called forward by name and officially declared his intention to be ordained to the Diaconate. Following the Litany of Supplication, the Most Reverend Joseph C. Bambera, Bishop of Scranton, laid his hands on Boris’ head and then recited the Prayer of Ordination. 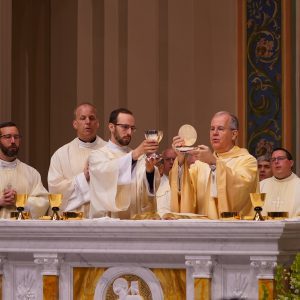 Following that Prayer, Boris vested as a Deacon and received the Book of Gospels from Bishop Bambera who said, “Receive the Gospel of Christ, whose herald you have become. Believe what you read, teach what you believe, and practice what you teach.”

In addition to serving as ordaining prelate, Bishop Bambera also served as principal celebrant and homilist for the Ordination Mass.

During his homily, he acknowledged the large crowd that filled the Cathedral, saying the day is not only a blessing for Michael and his family, but also for the entire Diocese of Scranton.

“While we ordain one man today, it is so apparent that it takes the entire Church to nurture and bring a vocation to fruition,” Bishop Bambera said. “None of us is ordained for ourselves or to achieve some personal sense of accomplishment. We are called by God and sent forth for mission – to serve God’s holy people. We ought never lose sight of this reality!”

The Bishop noted that Boris is being ordained at a unique moment in the life of the Church. For more than two years, the world has been dealing with the COVID-19 pandemic and most recently, the War in Ukraine has shown the need for peace in the world.

“Our people continue to look to the Church and to the Lord whom we proclaim as their greatest hope. Michael, the Church needs you now, more than ever! Give God’s people reason to hope,” the Bishop explained.

Reflecting on the readings from Mass, the Bishop used Saint Paul’s words from his letter to the Church at Ephesus to explain God’s Spirit will pour grace and mercy into Boris’ life to help bring people that hope, healing and peace.

“If you want your ministry as a deacon to be fruitful, Michael, you must root yourself in Jesus’ life and love. The disciplines of prayer, obedience and celibacy that you are called to embrace this day are meant to enable you to grow in the same spirit of service and mercy that so characterized Jesus’ ministry,” Bishop Bambera added. “These disciplines are not obstacles, hurdles or distractions that are somehow detached from what it means to be an ordained minister of the Church. They are not meant to set you up as being better or greater than others. Rather, they are the vehicles that will carry you to a deeper relationship with Jesus.”

As a Deacon, Boris’ ministry will be three-fold. He will assist the Bishop and his priests in ministries of the Word, Liturgy and Charity. This includes proclaiming the Gospel, leading intercessions, preaching, preparing the altar, celebrating baptisms, leading the faithful in prayer, distributing holy communion, witnessing marriages and conducting wake and funeral services. Deacons also identify the needs of poor and underserved, and shepherd the Church’s resources to meet those needs.

“While you have been given tremendous gifts and talents, we pray that you will always rely upon the grace of God to fill up whatever may be lacking in you to carry out fully the ministry entrusted to you this day,” Bishop Bambera ended his homily by saying.

As he listened to the Bishop explain the roles and responsibilities he now assumes, Boris recognized the gravity and importance of the work he undertakes.

“Obviously, it felt serious before, but during the homily, where he was listing the responsibilities, it started to settle in more that this is what I’m committing to and the moment of making the promise, it really is an unreal experience,” Boris said. “I made the promise and I’m going to keep it to the best of my ability!”

Following Mass, family, friends and many faithful greeted Boris. That includes parishioners from his home parish of Saint Andre Bessette, Wilkes-Barre, as well as people from Our Lady of Mount Carmel and Saint Rose of Lima in Carbondale where he served a pastoral year and will be assigned for summer ministry.

“It was really great. I saw a lot of people that I haven’t seen in a couple years. Friends, family and a lot of them don’t even know each other, but the fact that we have the common bond – not only of me – but God’s grace bringing us together,” Boris said.

As he looks to the future, and God-willing, being ordained to the priesthood next year, Boris simply said, “I’m taking it one day at a time. I think what brought me to this moment as a deacon is one day at a time and when God’s ready, he’ll prepare my heart for the next step.”