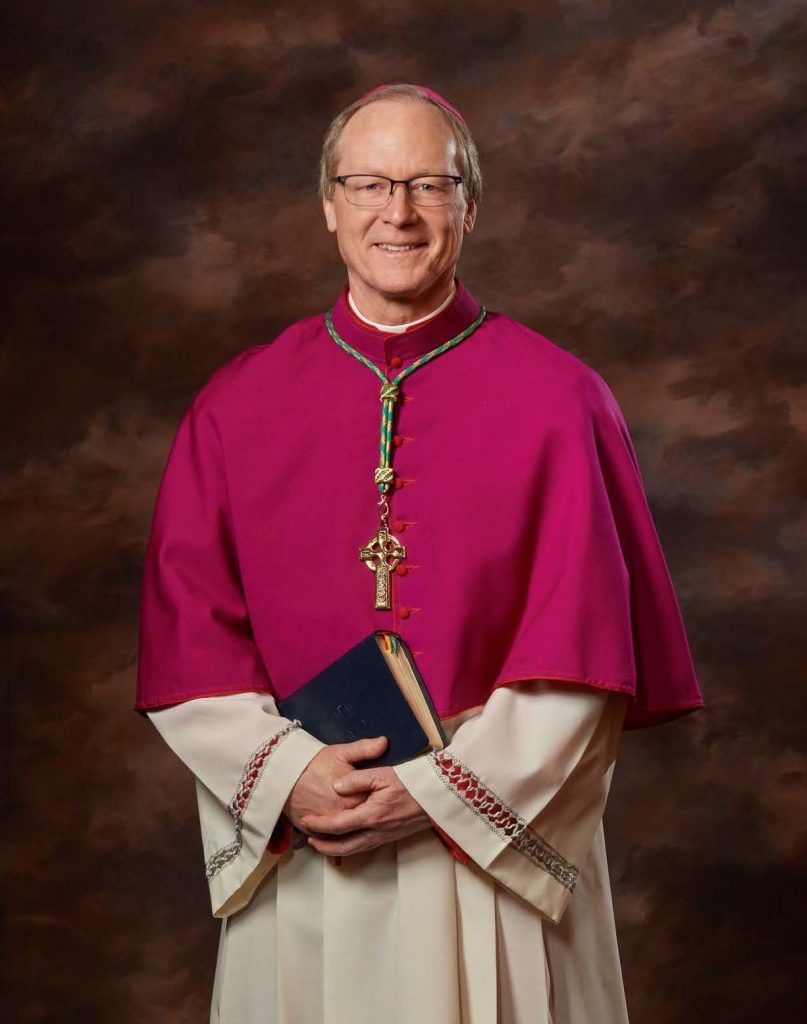 Thank you to the Diocese of Scranton
from Bishop Walsh

I would like to offer one great big “WORD OF THANKS” to the Diocese of Scranton! These past weeks have been somewhat overwhelming, but made bearable by equally overwhelming displays of kindness and generosity, most especially the ‘Mass of Thanksgiving and Sending Forth’ held at St. Peter’s Cathedral on February 15. I want to thank Bishop Bambera for giving me the opportunity to gather with brother clergy, family, friends and faithful from the diocese whom I have come to know over the years. Thank you to the Office of Parish Life, Msgr. Rupert, Cathedral staff, music ministry, and anyone who helped plan and participated in the Mass. My family and I also want to extend warm thanks to Dan Gallagher and CTV for the special biography they produced.

I will dearly miss being a priest in the Diocese of Scranton and feel sad to leave NEPA, but my heart swells with gratitude to God for all I have and will experience in His One, Holy, Catholic and Apostolic Church!

In Christ our Life!
+Bishop Walsh

Solemn Vespers on the Eve of Bishop-elect Jeffrey J. Walsh’s Episcopal Ordination and Installation as Sixth Bishop of the Diocese of Gaylord March 3, 2022

Mass of Thanksgiving and Sending Forth for Bishop-elect Jeffrey J. Walsh
February 15, 2022 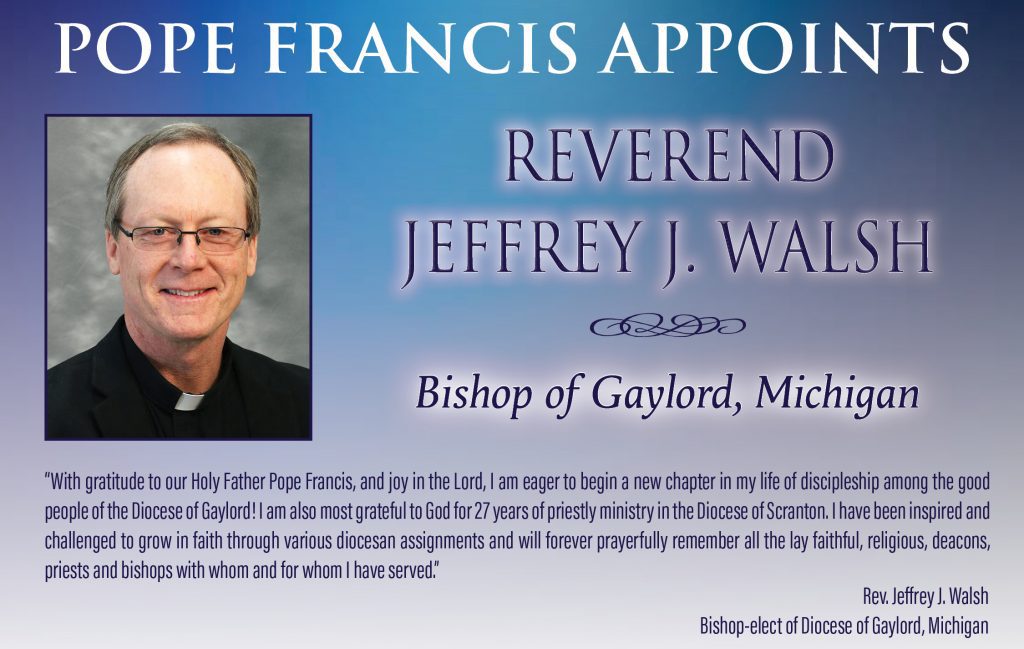 SCRANTON – On December 21, 2021, Pope Francis appointed the Reverend Jeffrey J. Walsh, pastor of Our Lady of Mount Carmel Parish and Saint Rose of Lima Parish, Carbondale, as the sixth bishop of the Diocese of Gaylord, Michigan.

Bishop-elect Walsh succeeds Most Reverend Steven J. Raica, J.C.D., D.D., who was installed as Bishop of the Diocese of Birmingham, Alabama, on June 23, 2020. Since that time, Bishop Walter A. Hurley has been serving as the apostolic administrator of the Diocese of Gaylord.

Bishop-elect Walsh’s episcopal ordination and installation as Bishop of Gaylord are scheduled for March 4, 2022, at 2 p.m. in Saint Mary Cathedral, Gaylord.

“With gratitude to our Holy Father Pope Francis, and joy in the Lord, I am eager to begin a new chapter in my life of discipleship among the good people of the Diocese of Gaylord! I am also most grateful to God for 27 years of priestly ministry in the Diocese of Scranton. I have been inspired and challenged to grow in faith through various diocesan assignments and will forever prayerfully remember all the lay faithful, religious, deacons, priests and bishops with whom and for whom I have served,” Bishop-elect Walsh said. “In particular, I would like to acknowledge the kind support of Bishop Joseph C. Bambera. The most important act of gratitude I can offer is for my parents, Jerome and Nancy (Doud) Walsh. They, as well as my deceased grandparents, have been the most significant formators of my life. I have been blessed with a solid, but by no means ‘perfect,’ family that also includes my two brothers, two nieces, one nephew, aunts and uncles and many close first cousins. Looking forward, I hope to bring a missionary spirit to my episcopal ministry under the mantle of Divine Providence. From ‘Penn’s Woods’ to the land of ‘Great Lakes,’ I trust God’s loving plan.”

Bishop-elect Walsh was born on November 29, 1965. The son of Jerome and Nancy Walsh, he is a native of Scranton, Pa., and is a graduate of Scranton Central High School. He is one of three children, with brothers, James and Joseph Walsh. He graduated from the University of Scranton in 1987 with a degree in Health and Human Resources. He went on to complete his priestly studies at Mount St. Mary’s Seminary, Emmitsburg, Md., earning a Master of Divinity Degree.

During his years of pastoral ministry, Bishop-elect Walsh also served in a variety of Diocesan positions, including Director of Religious Formation at the former Sacred Heart High School in Carbondale and the former Bishop Hannan High School in Scranton. For five years he was chaplain at Saint Michael’s School and for 12 years (1995-2007) he served as chaplain to the Deaf Community. Bishop-elect Walsh has also served as Diocesan vocations director, was director of youth and young adult retreats at Fatima Center, and served for one year as the Diocesan Deputy Secretary for Catholic Human Services. In 2007, he was also appointed to the Board of Directors of the Notre Dame Regional School System.

In reaction to Pope Francis’ appointment, His Excellency, the Most Reverend Joseph C. Bambera, D.D., J.C.L., Bishop of Scranton, commented, “With pride and gratitude to God, we celebrate Pope Francis’ appointment of Father Walsh to serve as the sixth bishop of the Diocese of Gaylord. This announcement brings great joy in the Diocese of Scranton as the Holy Father has chosen a native son, nurtured and formed locally, to the office of episcopal leadership and service in the Church. Having known and served alongside Father Walsh for many years, he has shown himself to be a caring, compassionate and skilled pastor. His deep love for the Lord is evident in the loving service that he has shared with the flock of Christ entrusted to his care in a wide range of parishes, ministries and apostolates. Father Walsh has generously shared his talents and his love for the Church in so many ways, especially with our youth, elderly, the poor, sick and those on the periphery. While this appointment is somewhat bittersweet for many of us in the Church of Scranton, especially those of Our Lady of Mount Carmel Parish and Saint Rose of Lima Parish, where Bishop-elect Walsh currently serves as pastor, we are grateful to God that he has chosen Father Walsh to serve the broader Church and particularly our brothers and sisters in the Church of Gaylord as bishop. Please join me in giving thanks for the years of priestly service that Father Walsh has shared so generously with the faithful of our Diocese and in asking the Lord Jesus to fill his heart with joy as he begins his episcopal ministry among the good people of Michigan.”

The Diocese of Gaylord is one of seven Roman Catholic Dioceses in the state of Michigan. His Holiness Pope Paul VI established it on July 20, 1971. The 11,171 square miles of the diocese includes the 21 most northern counties of Michigan’s lower peninsula, which are mostly rural in nature. The total population of the Diocese exceeds 506,000, of which more than 44,000 are Catholic. The Diocese of Gaylord consists of 75 parishes, 16 Catholic schools and many closely related institutions.

The Bishops of Gaylord: