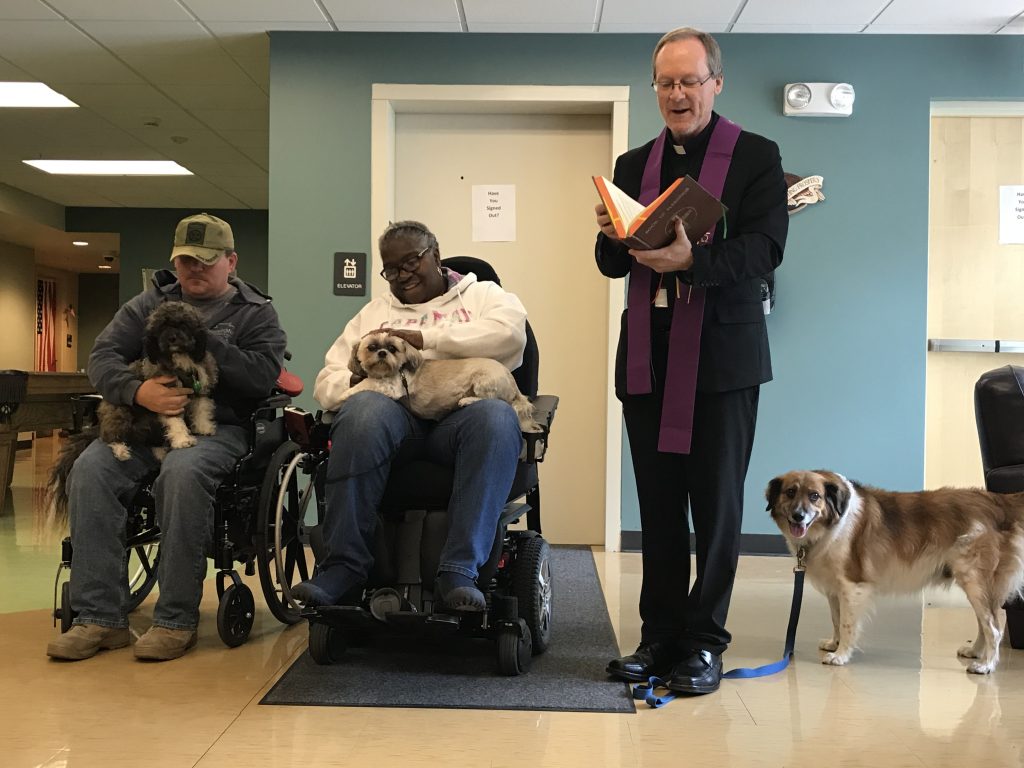 Right before they received a blessing, Otis, 2, and Sir Lancelot, 8, sniffed each other and waged their tails like old friends.

The two dogs were the guests of honor at a pet blessing held on October 4, at Saint Francis Commons, an affordable, transitional housing facility for homeless veterans, which is operated by Catholic Social Services.

“We’re grateful that we have an opportunity to celebrate the gift of all creation in honor of Saint Francis of Assisi,” Father Jeffrey J. Walsh, V.E., said. Father Walsh led the blessing ceremony.

Thanks to generous funding from the Robert H. Spitz Foundation, which is administered by the Scranton Area Community Foundation, as well as the PNC Foundation, homeless veterans staying at Saint Francis Commons can have a support animal through the Curative Companions Program.

“He’s not my pet. He’s my lifeline and I need him,” veteran Toyya Durham said.

Durham is Sir Lancelot’s owner. Prior to arriving at Saint Francis Commons, she was living out of her car.

“I made a promise to him when I got him that I would never let him go,” Durham said. “He’s my baby but I think we help save each other.”

“He means everything to me. If I didn’t have him I would be lost,” Wolfe said. “I come home and he senses everything. If I’m in a good mood or a bad mood, or if I’m drifting off into a bad place, he knows it and he comes and lets me know that everything is okay.”

This is the first year that the Curative Companions program has allowed veterans at Saint Francis Commons to have pets. It is already making a difference.

“We’ve had four veterans with their animals transition from homelessness to permanent housing and this funding played a big part in that!” Ryan Pollock, Saint Francis Commons Program Supervisor, said.