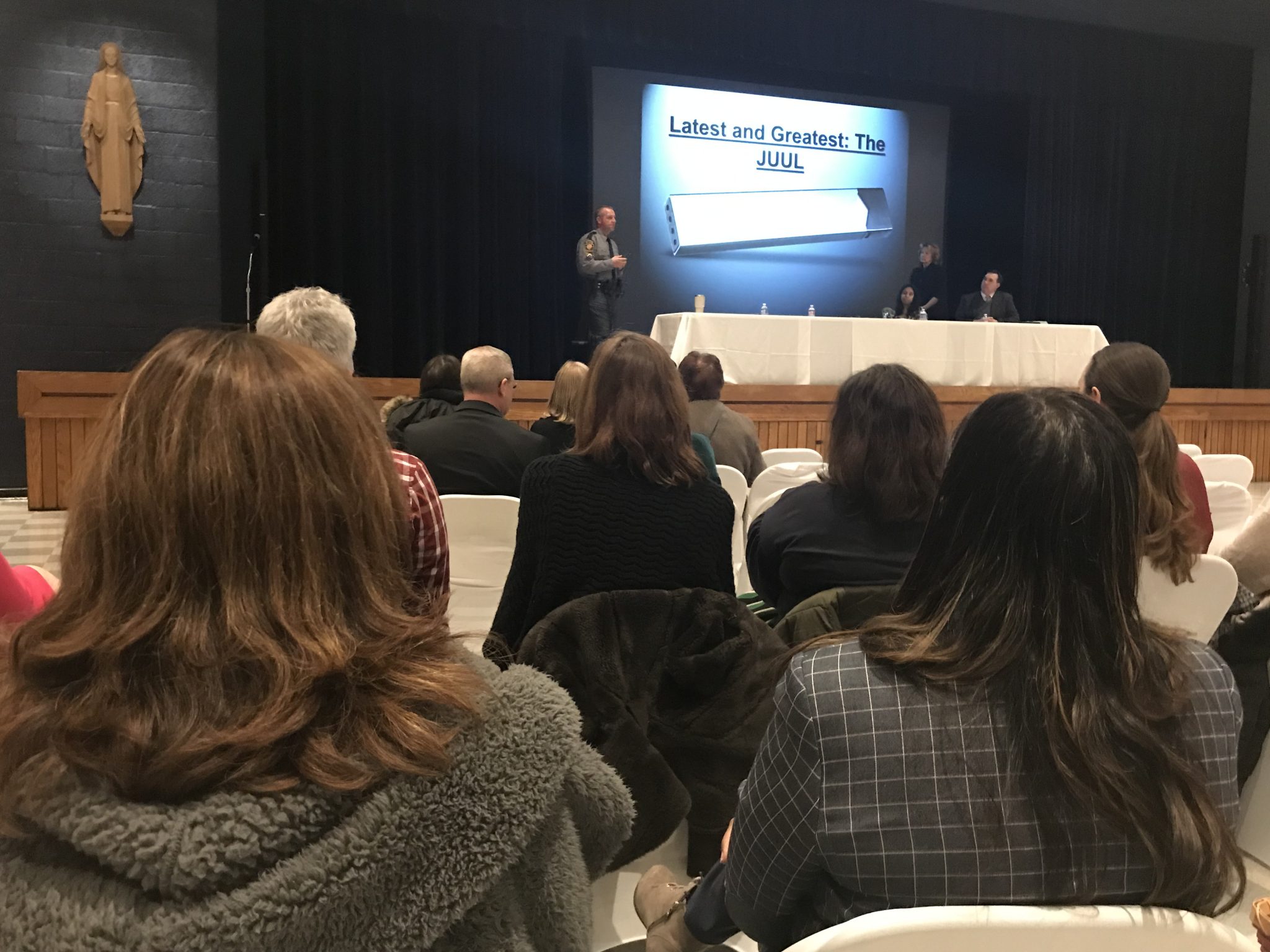 SCRANTON – The U.S. Surgeon General has called it an epidemic and local experts agree, highlighting the importance of parents understanding and taking action regarding youth e-cigarette use.

“Statistics show that in 2018, more than 3.6 million youth, including one in five high school students and one in 20 middle school students were e-cigarette users,” Trooper Robert Urban with the Pennsylvania State Police said during an “Evening with the Experts” on Dec. 5, 2019.

Recognizing the health risks associated with vaping, the Diocese of Scranton Catholic School System put together a program featuring panelists from the fields of law enforcement, health and education. More than 30 parents and educators attended the session which was held at the Diocesan Pastoral Center.

“Less than a decade ago, the e-cigarette was an obscure product marketed as a safe, tobacco-free alternative to conventional cigarettes by a single company in China,” Trooper Urban explained. “Now it is a $3 billion global industry with over 600 brands and 8,000 flavors and liquids.”

The panel began by explaining exactly what e-cigarettes are — battery-powered devices that deliver nicotine, flavorings and other ingredients to the user. The panelists then explained that they do not create harmless “water vapor,” instead they create an aerosol that can contain harmful chemicals.

Tolerico highlighted the difference between the current use of e-cigarettes by students and the cigarette-smoking generation decades ago.

“Years ago, if a kid was smoking the bathroom, you could certainly smell it…now it’s not these giant plumes of smoke or vape. You really can’t see anything and they’re odorless,” Tolerico explained.

As of Dec. 4, 2019, the U.S. Centers for Disease Control and Prevention reported 2,291 cases of lung injury linked to vaping. It also reported 48 deaths have been confirmed in 25 states and the District of Columbia.

Dr. Sreelatha Naik, a specialist in pulmonary, critical care and sleep medicine with Geisinger, explained many of the health dangers associated with vaping.

“There is so much inflammation in the lungs that it is hard for the lungs to take oxygen from the air,” Dr. Naik said as she showed photographs of lungs damaged by vaping and described her experiences in treating patients locally.

The panel explained that e-cigarettes come in many shapes and sizes. Some look like regular cigarettes, cigars or pipes while larger e-cigarettes such as tank systems – or “mods” – do not look like other tobacco products.

Parents also learned that some e-cigarettes look like other items commonly used by young people, such as pens and USB flash drives.

“Right now, it’s not illegal to buy or sell to minors, vaping products, under our (Pennsylvania) laws as they exist. It’s illegal to sell tobacco so we are trying to broaden our tobacco laws to include vaping products,” Price said.

Price also emphasized that all Lackawanna County school districts, including the Diocesan School System, participate in the Safe Schools Coalition where information on topics like vaping is discussed on a regular basis.

This was the second “Evening with the Experts” hosted by the Diocese of Scranton Catholic School System. The first program, held earlier this year, focused on the potential dangers associated with social media usage.