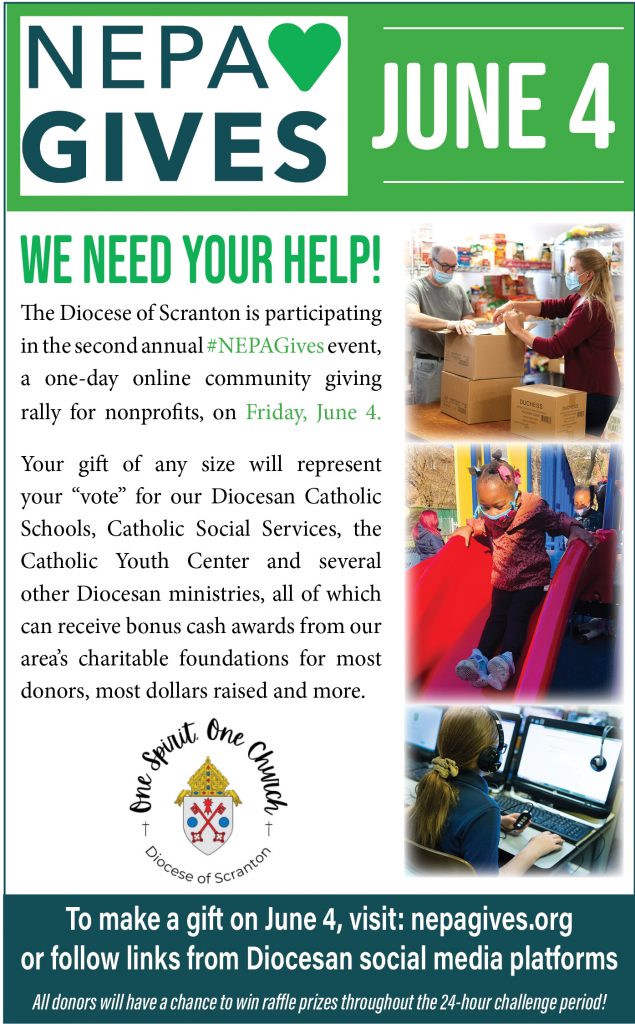 WILKES-BARRE – As a longtime board member for Saint Vincent de Paul Kitchen, Chris Bedwick believes in simple, to-the-point missions, those she calls “the real deal.”

That’s the message Bedwick, who signed up as a fundraising ambassador for the second annual NEPA Gives nonprofit fundraising marathon on June 4, is sharing with her friends, family and personal contacts as she offers up her time and effort to raise money for a Diocesan cause so close to her heart.

“Being hungry is a tough way to live,” the owner of Bedwick’s Pharmacy & Gifts in Wilkes-Barre wrote on her personal fundraising page created for the event. “But the Saint Vincent de Paul Kitchen eases some of these hardships.”

She and at least 36 other fundraising ambassadors so far have created personal profiles on the Diocese of Scranton’s profile page on nepagives.org and taken up a challenge to raise as much money as possible in 24 hours come June 4.

Last year, thanks to the support of 170 donors who made 187 online gifts in the 24-hour period, the Diocese raised $36,725 and secured the top two prizes: Most Dollars Raised by a Large Nonprofit Organization and Most Unique Donors to a Large Nonprofit Organization. The Diocese also won several other bonus prizes, and the total raised was divided among Diocesan charitable organizations, Catholic schools, and the Diocesan Vocations office.

This year, more than 200 nonprofits are already registered for the challenge, and the foundations are offering more than $400,000 in bonus prizes. The Diocese has joined the effort once again to support Catholic Social Services, Saint Francis of Assisi Kitchen in Scranton and Saint Vincent de Paul Kitchen in Wilkes-Barre, Catholic school scholarships and the Vocations office.

This year’s additional new beneficiaries include several individual Catholic schools that have signed on with projects of their own as well as the Catholic Youth Center in Wilkes-Barre, which is in need of major pool renovations and a new child-transport van. The Diocesan Youth Ministry team, which is raising funds to send young Catholics to the National Catholic Youth Conference in Indianapolis in the fall, has also joined the effort.

“As of Friday May 21, we have 12 different Diocesan cause areas on our team page and leaderboards,” Sandra Snyder, Diocesan grant writer and director of the Diocesan NEPA Gives effort, explained. “Each of those cause areas is or will be championed by at least one fundraising ambassador, who will work to ‘get out the vote’ in terms of dollars for their chosen cause.”

The Diocese also welcomes match challenges and gifts from businesses and organizations, which are an important component of the NEPA Gives effort, Snyder said. All gifts can essentially be doubled by a match challenge, she said, noting her appreciation for the Moses Taylor Foundation, which has already promised the Diocese of Scranton $2,000 after it raises $1,000. That generous offer will support the Diocese’s work to alleviate hunger in the community.

“Last year, NEPA Gives presented a special challenge as we were asking people for financial support during a particularly tough time in everyone’s lives, but we were overwhelmed with gratitude for how many people came through for us and propelled us to the top of that leaderboard,” Snyder said. “What a message they sent about their love for our Church and our Diocese. This year, we hope for an equally strong or better showing as we all together recover from the Coronavirus pandemic. We’re so grateful to the Scranton Area Community Foundation and the other foundations and organizations who have made this all possible. And of course we can’t thank our donors enough for showing up for us.”

Shannon Kowalski, Diocesan director of youth and young adult ministry, is equally grateful for the opportunity for her office to participate this year and to serve as a fundraising ambassador herself, along with young adults who seek to attend the National Catholic Youth Conference.

“The pandemic has significantly increased our costs to travel and attend this year,” Kowalski explained. The conference is such a worthy endeavor that we cannot turn down the opportunity to attend. We’re hoping the generosity of donors will make this trip possible for our young people.”

Schools, the various Catholic charities and the Vocations Office also are hoping for a big online turnout and encouraging people to check their emails and “tune in” to Facebook and other Diocesan social media channels throughout the day to participate in the excitement of the event. The NEPA Gives team will travel to various parish and Diocesan sites throughout the day to host several fun Facebook Live sessions to promote the event and the various causes.

“It was so much fun to donate last year, to rally others to donate, and to watch the Diocese move up the leaderboards and hang on to a top spot all day,” said Dominic Costantino, vocation program coordinator and member of this year’s NEPA Gives team.

Costantino also contributed his talents for the video posted on the Diocesan NEPA Gives page, singing “One Spirit, One Church,” chosen as the theme of and rallying cry for this year’s campaign.

“That song really captures what we’re all about as the wider Diocese of Scranton and the unified mission we are all trying to sustain when we pull together for something like NEPA Gives,” Costantino said. “We hope people will join us in this truly fun effort that shows all of us we can be philanthropists, even by making a $5 or $10 donation.”

HOW: To count toward the challenge to win the bonus money, all donations must be made online via a link the Diocese will post on the Diocesan website and social media channels and send out via emails throughout the day.

CONTACT: For more information or to learn how to donate via check, contact Sandra Snyder at Sandra-Snyder@dioceseofscranton.org or 570-591-5004.

Gifts also can be mailed to:

Checks should be received in the Chancery by Wednesday June 2 to allow time for processing and posting gifts online during the challenge period on Friday June 4.