PLAINS TOWNSHIP – Hundreds of Catholic men got a lesson in being a leader, protector and provider at the sixth annual “Be a Man Catholic Men’s Conference” on Oct. 30, 2021, at the Woodlands Inn & Resort.

The daylong event featured several speakers, Adoration, Reconciliation as well as the opportunity to celebrate Mass with the Most Reverend Joseph C. Bambera, Bishop of Scranton.

Organizers of the event say the conference aimed to challenge all men, regardless of whether they are single, married or clergy, to explore how they could be good fathers in an increasingly fatherless society. 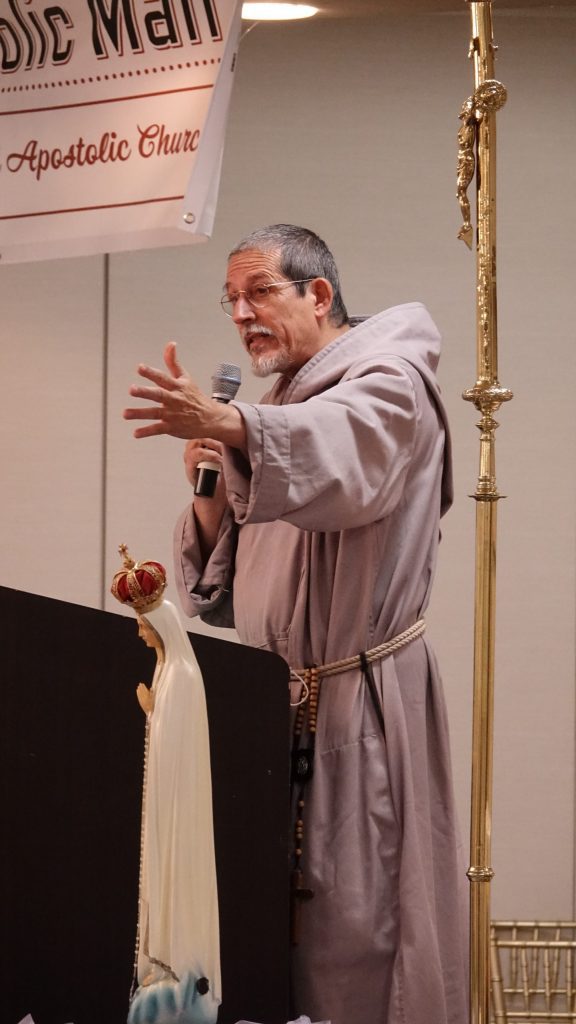 Father Glenn Sudano, CFR, one of the eight founding members of the Franciscan Friars of the Renewal, kicked off the conference by challenging attendees about their mission in life.

“We have the Holy Spirit within us. The question is, is this flame which burns within us, a pilot light or is it burning brightly?” he asked. “Christ wants us to feed and fan the flame of faith.”

Father Sudano focused on the changing times we live in, citing examples that more people shop on Sundays than attend Mass and have destination beach weddings than traditional church weddings.

Stressing that each man in the audience can change themselves by cutting out what is negative, Father Sudano ended on an upbeat note.

“Dig down deep, go deeper, go deeper into the Word. Read the Scriptures every day, go to Mass, Adoration and forgive people that injure you. Pray in every which way!” he added. 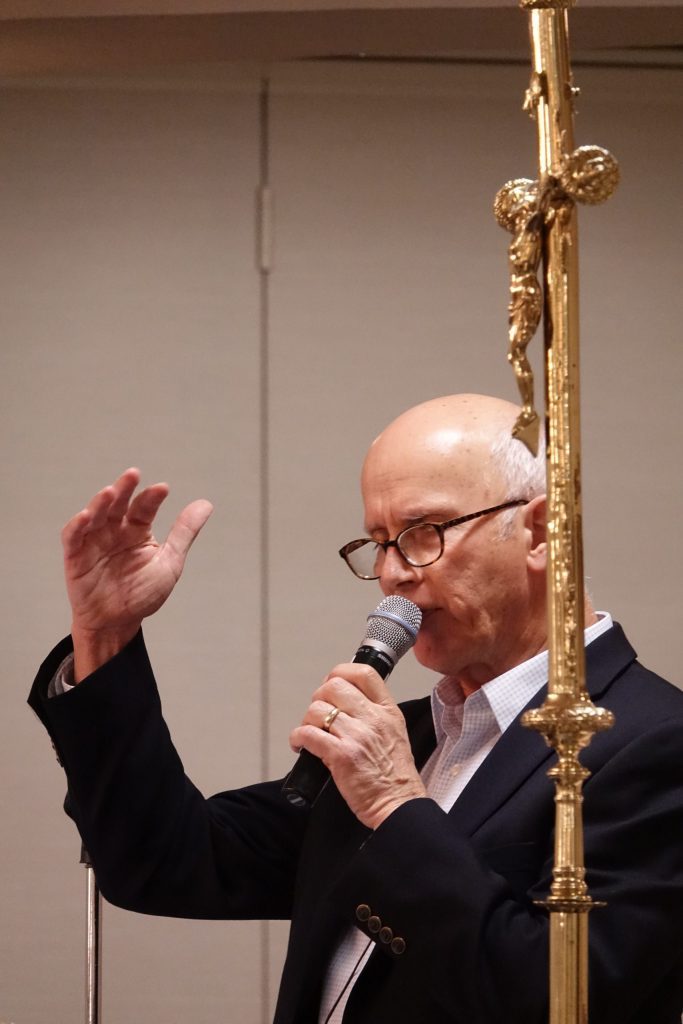 Karl Keating, founder of Catholic Answers, a lay apostolate of Catholic apologetics and evangelization, was the second speaker to take the stage.

The author explained that it was much easier to be Catholic when he was growing up decades ago, since it had tremendous influence in the movie industry and media.

“The Church was respected even when it was opposed,” Keating said.

Despite the changing times, Keating stressed that every man in the crowd can do something.

“We are all given talents, our talents are of various sorts. Some people have more than others but none of us is talentless,” he explained.

Unfortunately, Keating said many people are unaware what is happening around them because they are focused largely on themselves.

“People go about their daily lives worrying about this week’s paycheck, next month’s mortgage. They don’t, in general, have the larger picture,” he said.

Keating’s main message to the crowd was that it is never too late to do something beautiful for God. 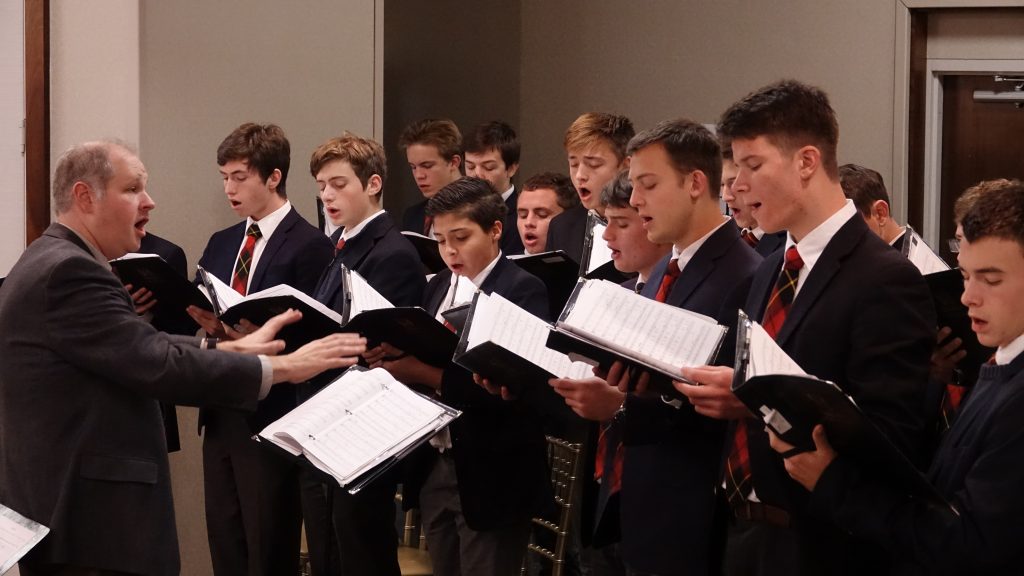 “Everybody in this room is responsible to the man next to you,” the husband, father and grandfather said.

O’Day explained several stories in which his Catholic faith became relevant in his life. When his girlfriend became pregnant at 21, two male family members tried encouraging them to get an abortion.

“I knew in my heart that was wrong,” he said. “I can promise you that I was scared to death. The abortion sounded a lot easier but we didn’t do it because of that little tiny voice inside.”

Ten years later, O’Day explained his boss helped him have an epiphany that he was not a good husband, father or Catholic. That helped bring him back to the Catholic Church in a much more intentional way.

As the director of Integrity Restored, O’Day now helps other men with an addiction to pornography through a Catholic perspective.

“It is the biggest impediment to evangelization and a faith-filled life in the Church today and it doesn’t matter if you go to Mass every Sunday. It affects everybody,” he said. “If you’re struggling, reach out to a brother.”

The title of O’Day’s presentation was “Fatherless Sheepdog.” He said as Catholic men, everyone in the audience is called to be a protector – but they can only do that if they themselves are healthy first.

“Build strong relationships with the men in this room. Use the Catholic faith to inform your decisions on how you support each other,” he said. “It is our time now to immediately stand up, be there for each other and be willing to take a stand.”

The conference concluded with Mass celebrated by the Most Reverend Joseph C. Bambera, Bishop of Scranton, who spoke of Saint Joseph during his homily. The bishop explained that just as Saint Joseph met the challenges of fatherhood in his day, Catholic men today must also meet them now.

The bishop said we have a lot to learn from Saint Joseph, who served as a protector of the Holy Family and teacher who showed Jesus the dignity of work and the value of human life.

“Joseph understood that God was worshipped most authentically when people of faith fulfilled the law expressly noted in the book of Leviticus, ‘You shall love your neighbor as yourself,’” Bishop Bambera explained. “Don’t be deceived, brothers, into believing that somehow this commandment is easily fulfilled.

It is a reminder of the cost of discipleship as we discover within it both the blessing and also the challenge that has been confronted by believers since the days when God first established a relationship with his people.”

In a world filled with division, polarization and hatred, the bishop said we all need to treat our neighbors with love and respect regardless of the color of their skin, language, lifestyle, wealth or political affiliation.

“May we always seek to fulfill God’s will like our patron, Saint Joseph, who understood well the great commandment to love God and to love and respect every life that God places into our own,” Bishop Bambera said.