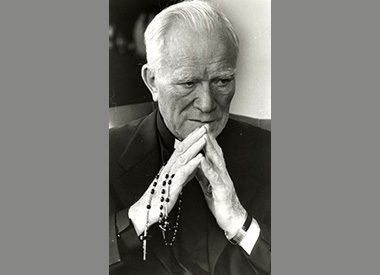 SCRANTON – Clutching a rosary that Father Patrick Peyton once used decades ago, Father Fred Jenga, C.S.C., President, Holy Cross Family Ministries, led the faithful of Scranton in a special recitation of the rosary on Thursday, Nov. 3, 2022, at the Cathedral of Saint Peter.

Father Peyton, a Candidate for Sainthood, is well known for his famous message, “The family that prays together stays together.” Best known as “The Rosary Priest,” Peyton traveled the world conducting hundreds of rosary rallies with more than 28 million people in attendance.

“Father Peyton is a pioneer of Catholic media in this country but also around the world,” Father Jenga said in an interview with The Catholic Light.

Peyton died in 1992. The Vatican declared him a “Servant of God” in 2001. That is the first title on the four-step path to canonization. In 2017, Pope Francis declared him “Venerable,” fulfills the second step.

Before he can get the title “Blessed,” a medical miracle attributed to Peyton’s intercession must be verified.

“We have one (miracle) which is being investigated by Rome, so that he can be able to be taken to the next stage and be ‘Blessed,’” Father Jenga stated.

A second miracle will be needed before Peyton can be declared a saint.

Father Jenga said reciting the rosary in Scranton is significant because Peyton had a special connection to the Electric City and the very Cathedral where the rosary took place. 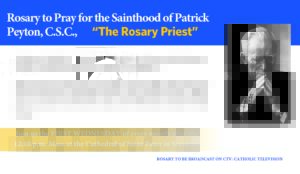 In 1928, at the age of 19, Peyton served as a sexton at the Cathedral of Saint Peter after arriving from his native Ireland.

“Today is a powerful, emotional day in my life,” Father Jenga said. “It was in this very cathedral that an Irishman served as a janitor or a custodian and was able to rediscover his vocation to the priesthood.”

Father Jenga said after becoming a priest, Father Peyton committed years of his life going around the world encouraging people to pray in their homes.

“This is the place where it all started from,” Father Jenga said. “This very space, this man, who used to open the doors of this Cathedral … this man is on the road to sainthood now.”

Father Jeffrey D. Tudgay, Pastor of the Cathedral of Saint Peter, talked about Peyton during the 12:10 p.m. Mass right before the rosary.

“He worked in this very cathedral, and every time I talk about it in this cathedral, I get goosebumps,” Father Tudgay said.

Holy Cross Family Ministries continues Father Peyton’s ministry to this day, encouraging family prayer and the power of prayer in homes. The organization serves 18 counties and has 27 ministry offices around the world, including in Latin America, Africa, Europe and Canada.

Father Jenga says there is a growing devotion to Father Peyton’s legacy around the world, especially in countries like Uganda, Tanzania and the Philippines.

“The rest of the world is on fire for this man. We have institutions named after him and rallies and concerts being prepared in honor of this man,” Father Jenga related. “His message is still relevant.”

Father Jenga said he is thrilled people in Scranton stand behind Peyton’s Cause for Sainthood.