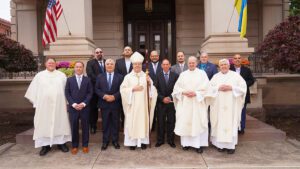 SCRANTON – As a member of Saint Ann Parish in Shohola, Frank A. Fanelli has served his community through the Knights of Columbus for several years. He has proudly helped to distribute thousands of meals over that time but is now looking to serve his community in a new way.

On Oct. 1, 2022, Fanelli was one of eight faith-filled men who took a step toward ordination as a permanent deacon in the Diocese of Scranton during a Mass at the Cathedral of Saint Peter in Scranton.

“I’ve had the calling for a while. It (Mass) was actually tear jerking. This is the first step in a long process,” he explained. “I’m just looking to help people.”

The Mass, in which the Most Rev. Joseph C. Bambera, Bishop of Scranton, served as principal celebrant and homilist, included the Rite of Candidacy.

During the Rite of Candidacy, Bishop Bambera accepted the men to formally enter the diaconate formation process as Candidates. Over the next four years, these men will receive spiritual, theological and pastoral formation, and upon completion, will be called to ordination as permanent deacons.

The Rite of Candidacy is the first official recognition of the positive signs of a man’s vocation to the permanent diaconate.

Capo said one of many things that led him to consider diaconal service is the growing number of people who do not believe in God.

“I believe with the lack of faith now in this world, in this climate, I feel that I can stand in the gap of people who believe and don’t believe, or people that are on the fence, where I can push them toward the way of God,” he explained.

Capo said if he could accomplish just five percent of what the early Apostles did, his ministry will have been successful.

“It’s a lot of responsibility but moving forward, it is something you have to hold dear – and through God – that is how it happens,” he added.

During his homily, Bishop Bambera told those admitted to Candidacy that God is calling them to a moment in life that demands a radical decision of faith and trust.

The bishop also thanked each man on behalf of all people in the Diocese of Scranton.

“You are responding to a call to be a sign and instrument of Christ, who came not to be served but to serve, and to give his life for the sake of the many,” Bishop Bambera explained.

Colaneri reflected on the importance of the bishop’s words following the Mass.

“It’s a calling to something more than yourself. You want to be in service to those who need you,” he said.

While he already has a full-time job as a store manager for a refrigeration and heating equipment business, Colaneri is looking forward to the opportunity that lies ahead.

“A lot of time people think the pomp and circumstance of being on the altar is where the glory comes, but in being a deacon, you set that aside. You become ‘less than,’ you become one of the people bringing the spirit of Christ to the people through the Church,” he added.

A ninth man, Francisco Castelan, has also been accepted into this formation class for permanent deacons, but he already received the Rite of Candidacy in 2013 in the Diocese of Brooklyn.