Ecumenical Prayer Service to be held Jan. 19 to celebrate annual Week of Prayer for Christian Unity 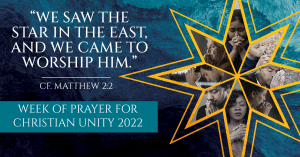 SCRANTON — Faithful throughout the Diocese of Scranton will join with members of various Christian congregations of Northeastern Pennsylvania for an Ecumenical Celebration of the Word of God on Wednesday, Jan. 19, at 12:10 p.m. in the Cathedral of Saint Peter.

The event highlights the annual Week of Prayer for Christian Unity – celebrated each January since its inception in 1908 – which will be observed this year during Jan. 18-25.

Most Rev. Joseph C. Bambera, Bishop of Scranton, will serve as both leader of prayer and homilist for the traditional ecumenical prayer service. Past chairman of the U.S. Bishops’ Committee on Ecumenical and Interreligious Affairs, Bishop Bambera has also served as Diocesan Director of Ecumenism and Interfaith Relations.

All faithful are welcome to attend the Jan. 19 Ecumenical Prayer Service at the Scranton Cathedral, as well as encouraged to participate in local Christian unity events throughout the weeklong observance.

The prayer service will be broadcast live at 12:10 p.m. on CTV: Catholic Television of the Diocese of Scranton. It will also be made available on the Scranton Diocese website and across all diocesan social media platforms.

As the universal Catholic Church, including local dioceses, immerses itself deeply into the call for a new evangelization proclaimed by Pope Francis through the 2023 Synod of Bishops on Synodality, both ecumenism and interreligious dialogue have been given prominence in the discussion.

The Vademecum for the Synod on Synodality, the Official Handbook for Listening and Discernment in Local Churches, it is stated: “The dialogue between Christians of different confessions, united by one baptism, has a special place in the synodal journey.”

Further, it addresses such key questions as: “What relationships does our Church community have with members of other Christian traditions and denominations? What do we share and how do we journey together? What fruits have we drawn from walking together? … How can we take the next step in walking forward with each other?”

According to Monsignor Vince Grimalia, Diocesan Coordinator for Ecumenical and Interreligious Affairs, the Week of Prayer for Christian Unity provides not only an opportunity for prayer for Christianity, but a time to learn more about various Christian churches and communities while offering motivation and commitment for participation in ecumenical activities.

“It is an opportunity to renew and re-energize our commitment to Christian unity,” Monsignor Grimalia said. “In a world with so much disunity, there is a need to overcome divisions and polarization and work to get nations and various ethnic, cultural and language groups to work together.”

In accord with such strong beliefs for religious unity, the United Nations since 2010 has celebrated the first week of February as “World Interfaith Harmony Week.”

During the observance, an “International Day of Human Fraternity” designated by the UN on Feb. 4 commemorates the signing of “A Document on Human Fraternity for World Peace and Living Together” by Pope Francis and the Grand Imam of Al-Azhar Ahmad Al-Tayyeb on Feb. 4, 2019.