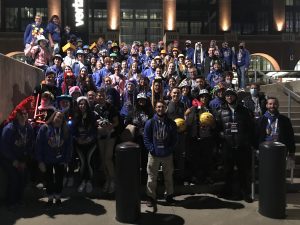 INDIANAPOLIS – While things may have looked different at this year’s National Catholic Youth Conference, the spirit of the event was unchanged.

Eighty-five young adults and chaperones from the Diocese of Scranton participated in this year’s event, traveling together by bus to the Indiana Convention Center and Lucas Oil Stadium for the Nov. 18-20 conference.

“It was fun that we all got to be together and get to meet new friends and hear all the speakers and go to Mass,” Lucas Bower, 15, Saint Joseph the Worker Parish in Williamsport, said. “Adoration was really neat. Everyone was quiet. Inside the whole stadium you could hear a pin drop.”

“Originally, I didn’t really know what I was getting myself into,” Olivia DeScipio, 15, Saint Eulalia Parish in Roaring Brook Township, said. “My older brother went and he said he had such an amazing experience. I was always on board with going once I got into high school but after this weekend, I really realize how big of an event this is and how amazing it was to be in such an accepting community of Catholics.”

This year, nearly 11,000 young adults from across the country participated in NCYC. Organizers decided to limit registrations to only half of the normal 20,000 because of COVID-19 concerns.

“The number this year was almost more impressive because of all the restrictions that are in place right now. It was crazy to see how many people were still willing to go through that,” Luke Magnotta, 16, Saint Eulalia Parish in Roaring Brook Township, said. This year was Magnotta’s second trip to NCYC.

In order to maintain a safe environment, all participants from the Diocese of Scranton were required to show a negative COVID-19 test result within 72 hours of the event. Face masks were also required during indoor events.

For many youths, group adoration on the second night of the conference is the part of the event they find most memorable.

As soon as the Eucharist was brought into Lucas Oil Stadium, all of the teens started kneeling, watching in silence as the monstrance was placed on the altar.

“There were 10,000 kids in that stadium, an echoing stadium, and there was no noise. Everyone was silent, praying to the same God,” Jacob Chechel, 14, Our Lady Queen of Peace Parish in Brodheadsville, said.

“I feel like the 10,000 of us, all getting together for quiet Adoration was just very special. It’s rare that you’ll see something that big,” Shaylee Kimmick, Our Lady Queen of Peace Parish in Brodheadsville, added.

Father Leo Patalinghug, a priest-member of a community of consecrated life called Voluntas Dei (“The Will of God”) led the adoration service.

Father Leo urged the teens to see the beauty of the real presence of Christ in the Eucharist.

“With Christ, all things are possible. You can be a saint – you are supposed to be a saint,” he said.

“I have always heard that Adoration at big conferences is really powerful … and it was very true for me,” Deirdre Drinkall said. Drinkall is currently working at Saint Ignatius Loyola Parish in Kingston as one of three ECHO apprentices currently serving in the Diocese of Scranton. “It was a sense of deep peace … there was just a palpable peace laying over us when Adoration came and it was really beautiful.”

Teens participate in projects that help others 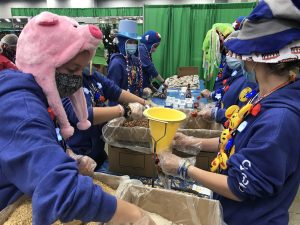 “I met so many people,” DeScipio said. “It was just so cool to be in a place where everybody has the same beliefs as you and you just felt more open, like you could discuss anything with them.”

There is also a large expo room inside the Indiana Convention Center where the students can shop, learn about vocations and meet keynote speakers.

The NCYC participants from Our Lady Queen of Peace Parish spent time together packing bags of rice and beans as part of a service project for Cross Catholic Outreach.

“Seeing how people in third world countries live really opened my eyes to how blessed I am to have some of the things I have,” Kimmick said.

In all, with just a small amount of work, the Pocono parish was able to pack enough bags to feed 5,832 people.

“It was so effortless. We were just talking and having a good time and I didn’t realize how many people we were serving food to, that don’t get the same things that we do. I take for granted everything I have and when I see that, it just puts me in the right mindset,” Chechel added.

At the closing Mass of NCYC, Indianapolis Archbishop Charles C. Thompson encouraged all attendees to return home with the fire of the Holy Spirit.

“Let us go forth with that fire to more fully embrace the Lord’s mission in bringing about the kingdom of God, striving always to be Christ-centered in all that we are about,” Archbishop Thompson said.

The closing Mass was one of the most memorable experiences of the trip for Olivia DeScipio.

When asked how he planned to keep the ‘fire’ of his NCYC experience alive, Luke Magnotta was quickly able to respond.

“If an experience like this did nothing more than to increase your desire to have a personal relationship with Christ, that will rub off on other people,” Drinkall said. “If you are on fire, then the people around you will slowly start to feel that and be on fire as well.” 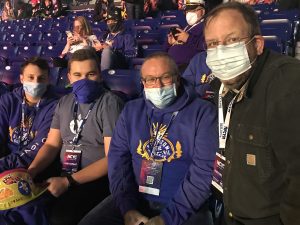 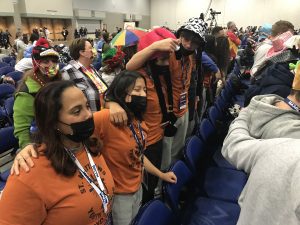 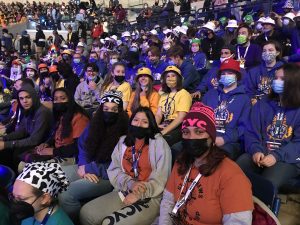