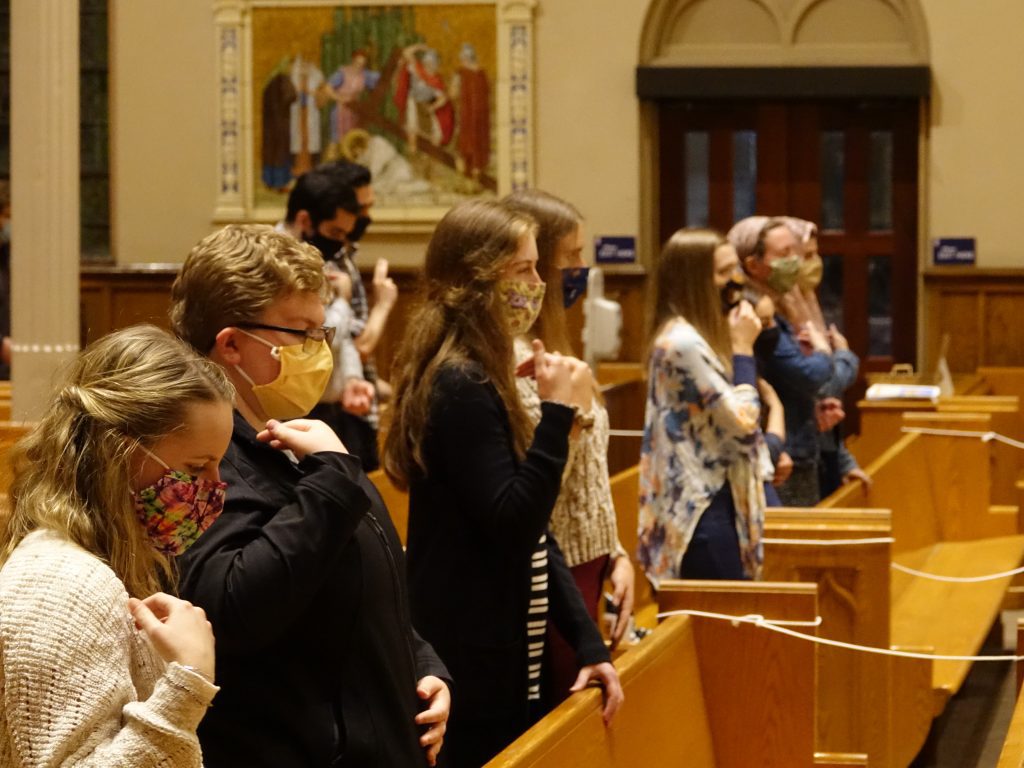 SCRANTON – Having celebrated their second wedding anniversary just days earlier, Chris and Veronica Morrison of Dunmore found themselves at the Cathedral of Saint Peter on Nov. 1, 2020.

The young couple felt called to participate in the Diocese of Scranton’s annual Leave a Mark Mass because it presented an opportunity to strengthen their commitment to one another, in addition to being around other young adults

“After you get out of college, it’s really hard for younger people to get involved, to make friends and feel a part of the Church community,” Veronica, 26, said.

“I’m all for community, getting connected, getting young people connected,” Chris, 27, added. “It’s really great that they can have something like this and that people show up.”

Due to the COVID-19 pandemic, attendees had to pre-register to attend the Mass in person. Attendance was limited to comply with social distancing regulations but the Mass was broadcast live on CTV: Catholic Television and livestreamed on Diocesan social media platforms.

“For me it’s definitely something important to make connections and keep my faith alive and keep it going,” 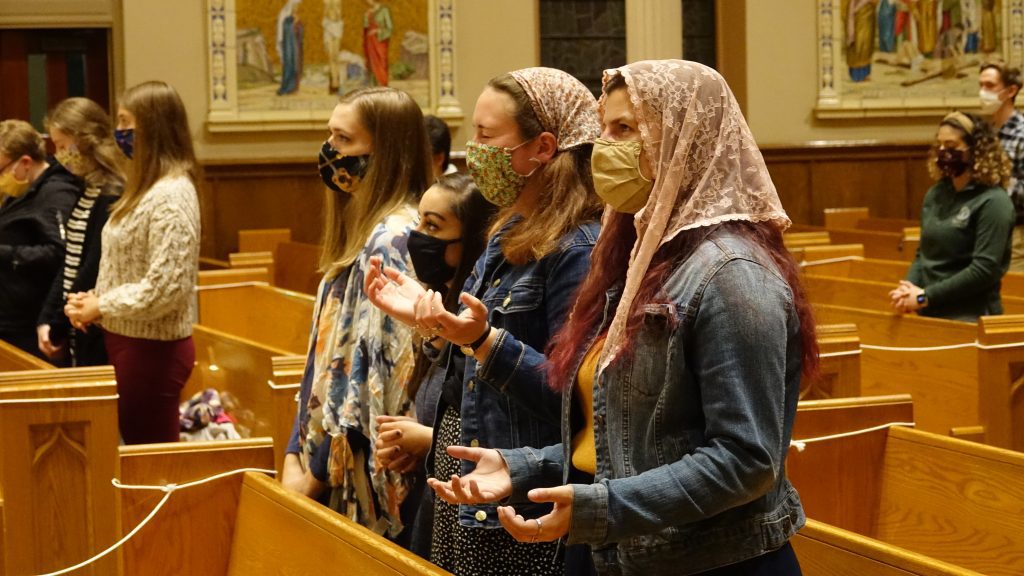 This year marked the fifth anniversary for the Leave a Mark Mass. The idea for the Mass came after Pope Francis spoke to pilgrims at World Youth Day in Poland in 2016. The Holy Father said, “It is very sad to pass through life without leaving a mark.”

Bridget Barnic, 24, of Moosic helped launch the Leave a Mark Mass five years ago while a student at Marywood University.

“I’ve found being with other peers my age very encouraging. It makes me want to share my faith more,” she said. 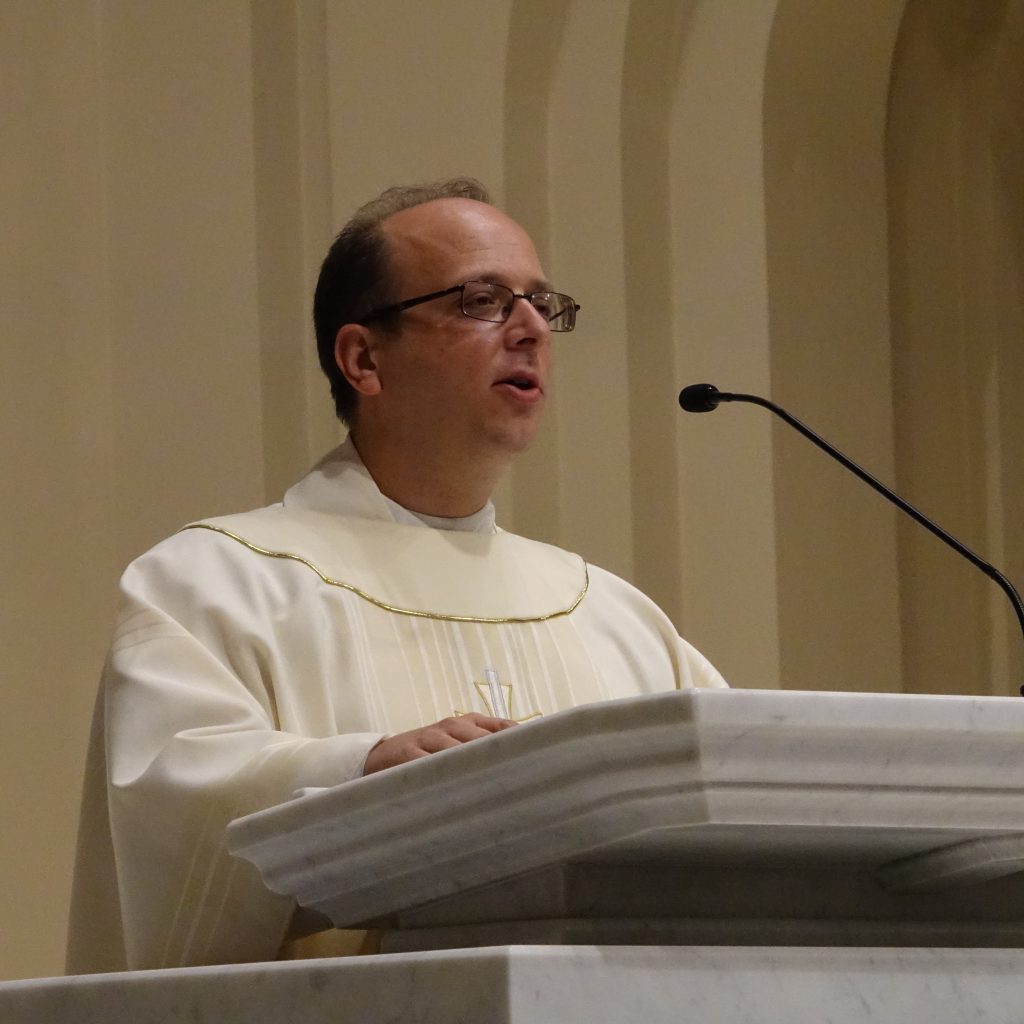 As a parishioner of Divine Mercy Parish in Scranton, Barnic believes the Leave a Mark Mass is important for young adults in the diocese.

“I feel that there is strength in numbers and when you’re surrounded by faithful people, it’s easier to go out in the world and not be afraid to speak your faith,” she added.

The Most Rev. Joseph C. Bambera served as principal celebrant for the Mass, which was held on the Solemnity of All Saints. Reverend Jonathan Kuhar, Assistant Pastor, Saint John Neumann Parish, Scranton, served as homilist.

Rev. Kuhar also encouraged the young adults to ask a simple question every day: ‘What does God want from me?’ 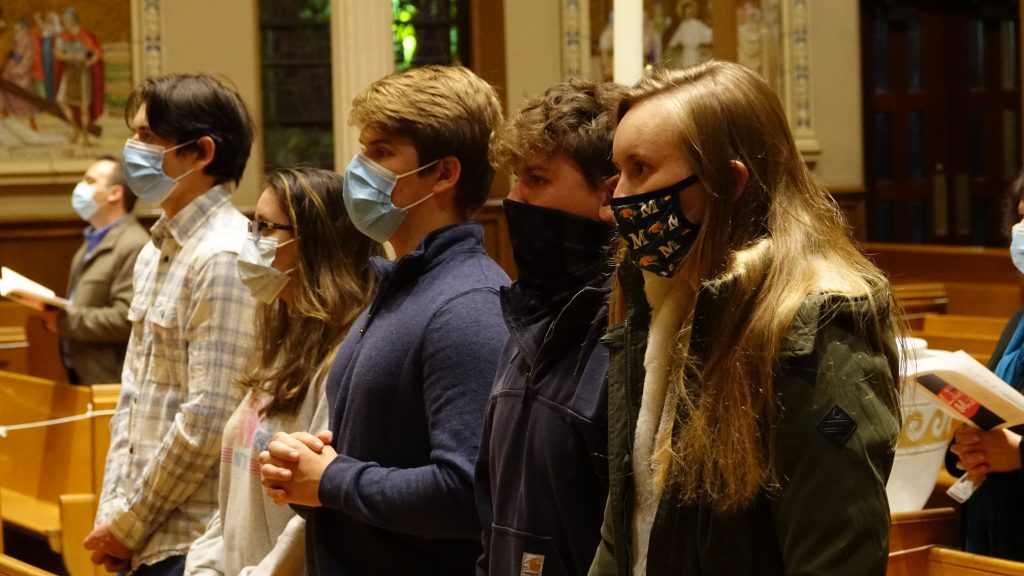 “If you ask this question honestly and faithfully, God will answer your simple prayer,” he said.

“This (Mass) is always a great opportunity for us to come together as a young Church, to listen to God’s call in our life, to discern what it is we’re supposed to do, how we’re supposed to discern our vocation and of course today to pray for the intercession of all of the saints that go before us,” Rev. Roche said.