Celebration to mark 100 years of worship for Wilkes-Barre church 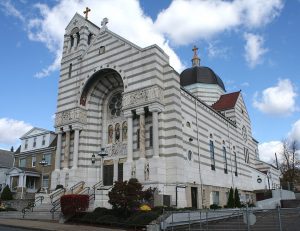 WILKES-BARRE – June 4 is going to be a big day of celebration for Saint Andrew Parish, as its primary worship site, Saint Patrick Church on Parrish Street, will mark a century of service to the community.

The public is invited to the church’s 4 p.m. Mass and to enjoy a coffee-and-dessert reception following the liturgy. The principal celebrant for the special liturgy will be Rev. Gerald W. Shantillo, V.G., S.T.L., Vicar General of the Diocese of Scranton and Moderator of the Curia.

“We have invited all of the surviving former pastors to be here with us. Most have said yes,” Deacon Bill Behm, Parish Life Coordinator of Saint Andrew Parish, said.

Church officials only recently realized the century mark was approaching for Saint Patrick Church, thanks to the Times Leader newspaper, and columnist Tom Mooney, who discovered the first Mass actually took place in the basement area of the church, even though construction was not complete on the building itself.

“Our cornerstone was laid in 1929 and the church was dedicated in 1930 so I figured we had years before we had to worry about a major anniversary,” Behm said. “They dug the basement here before the church and put a roof over the basement. That is where they had Mass from 1922 on and they built the church around that structure.”

Since learning of the anniversary, parish staff have been digging through archives.

“We have been through the attic of the rectory, the third floor, we have a lot of pictures. We have pictures of them constructing the main church, what we now call the Upper Church, but we had no idea when they were building the Upper Church, there was already a functioning Lower Church,” Behm said.

Behm, whose grandparents and parents both attended the church, believes the Anniversary Mass will be a nice opportunity for people to realize the history of their building.

“It is a way of touching the history so you realize that it is a neighborhood church, but the neighborhood has expanded over the years,” he said. “It was given to us from those who came before us and it is our gift to those coming after us.”