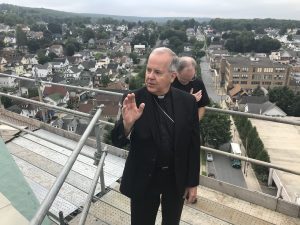 CARBONDALE – After walking up 15 flights of scaffolding steps, the Most Reverend Joseph C. Bambera, Bishop of Scranton, reached the steeple atop of Saint Rose of Lima Church and took in the view.

On Thursday, July 29, 2021, Bishop Bambera joined St. Rose’s pastor, Father Jeff Walsh, to offer a blessing on the church’s renovation project that nears completion. Several other parishioners who were instrumental in getting the work – literally – off the ground joined the bishop.

After raising $850,000 over the last year and a half, the church’s granite steps, steeple and façade have all been restored.

“It’s the oldest church in Lackawanna County and one of the earliest churches in the Diocese of Scranton,” Father Walsh said. “We know it was built on the backs of the coal miners and the immigrants who came to this area who took their faith seriously and it’s good to know that new generations are still doing that.”

The parish itself was founded in 1832 and the current church building dates back to 1873.

“This is probably the tallest building in Carbondale. The tower itself was put on in 1899 so it has been on over 100 years before now and it had some needed repair both inside and outside, spalling along the bluestone in the front, and all around the tower itself, so it was ready, it’s been in the works for two years,” project manager John Devine explained. “It was very urgent because some of it was peeling off the front of the building and we even had one of the pieces of metal up there flapping in the wind. Had it fallen, it was really a safety issue.”

The Saint Rose of Lima steeple is a focal point in the Pioneer City. Knowing its importance, both parishioners and the Carbondale business community embraced the renovation work.

“A lot of the people who are natives of Carbondale said this has always been a community that has stepped up when they needed to do what they were called to do. That has proven to be a true statement. We reached the $850,000 goal. We got the work on the steps done and the façade is going to be completed and the steeple is going to be restored to its original glory,” Father Walsh said.

While the project has taken a little longer than expected, the scaffolding around the church is expected to come down around Aug. 9. The total price tag of the restoration project has been a little more than expected as well – estimated to be $975,000 now – so anyone in the community is still encouraged to help.

Father Walsh also gave credit to the work of his predecessors, Father James Price and Father Seth Wasnock, who began the renovation project.

“It’s certainly a sign to the community that we’re here to stay and we’re going to be around another 100 years at least and it’s a sense of stability and pride that we do take in this building,” Father Walsh said. “But it’s always more than the building. The outside is meant to represent what’s on the inside.”

“It’s going to be stunning. People are going to look up and say ‘wow.’ You’re not even going to remember what it looked like before because it’s going to be new and clean and hopefully serve the community for another 100 years,” Devine added.

As he offered his blessing, Bishop Bambera marveled at the change that has taken place. His blessing was as follows:

“Lord, We thank you for the work that is being done on this incredible tower, this beacon of hope and promise and love and God’s mercy to this entire community. We pray that through the work that is done here, faith that has been given to so many people may grow and flourish. We thank you for the workers who have put this beautiful tower back in place and have restored it to its original beauty. We thank you for the good people – the parishioners and the friends of this parish – who have worked so hard to make this a reality, who have given of their time and their treasure to bring this church back to its beautiful state. Finally Lord, we just ask your blessing upon this community and this congregation – that it will always be a community filled with love, hope, working towards peace. In the name of the Father, Son and Holy Spirit.”