At Vigil Mass for Life, hope evident that abortion ruling will be overturned

Home / 2021 News / At Vigil Mass for Life, hope evident that abortion ruling will be overturned 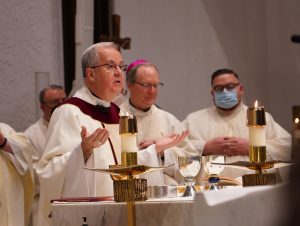 LAFLIN – As a new mother, Rosemary LaBar of Dallas feels it is important to share her belief that all human life, including that of the unborn, is sacred.

That is why she bundled-up her four-month-old daughter, Josie, putting the infant in a baby stroller to join more than 100 other people at the Diocese of Scranton’s Vigil Mass for Life on Jan. 20, 2022, at Saint Maria Goretti Parish in Laflin.

Born and raised Catholic, LaBar is hopeful the U.S. Supreme Court might reverse its 1973 Roe v. Wade decision that legalized abortion by upholding a Mississippi law banning most abortions after 15 weeks. A decision in the case of Dobbs v. Jackson Women’s Health Organization is expected this summer.

“I’m definitely hopeful. I’m part of a couple pro-life groups online. It’s not just a religious thing anymore. I see a larger number of secular people who just understand that human life begins at conception and it should be protected,” she added.

Most Reverend Joseph C. Bambera, Bishop of Scranton, served as principal celebrant and homilist at the Vigil Mass for Life. He was just a junior in high school when the Roe v. Wade decision was handed down. 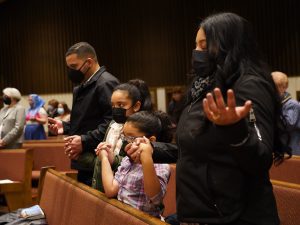 Even though the battle to end abortion has been challenging and long – almost 50 years – Bishop Bambera agreed this past year has given people a reason to be hopeful.

“While the battle is far from won, with states like our neighbor to the east in New Jersey that recently codified into state law an individual’s right to an abortion, including late-term abortions, the United States Supreme Court has engaged the question of abortion rights more intensely than ever before,” the bishop said. “As we wait for a determination by the Court, we would do well to keep ourselves focused on the goal of our journey and the example of Jesus. Otherwise, we risk losing our way by engaging perspectives that distract from, rather than serve, the noble ends of our efforts to preserve the sanctity of human life.”

The Vigil Mass for Life was scheduled on the eve of the annual March for Life in Washington, D.C. Recognizing that some people might not want to travel because of the ongoing COVID-19 pandemic, the diocese organized the Mass as a special prayer opportunity for all those who believe that every life has value, dignity and worth.

“The theme for this year’s march, ‘Equality Begins in the Womb,’ emerged in response to the national dialogue about the nature of equality that our country has continued to engage, particularly in the last few years. Citing the tragic reality of inequality that has impacted our land as a result of race, country of origin, disability status, age and economic background, organizers of the event sought to build upon the vital need for our country and people to finally put to rest divisions among us. They stated, ‘What matters is the fact that each of us is a human being. What matters is that life is precious, and that because it has inherent human dignity, it should be protected from the moment of conception,’” Bishop Bambera said.

Reflecting on all three readings from the Mass, the bishop noted that the sacred scriptures are filled with words that command us to reverence every life that comes into our world.

“What they expect from us as Christians is clear and unambiguous … Our welcome into God’s eternity will be determined by nothing short of our willingness to reverence, respect and serve the poorest and most vulnerable among us in whom Christ is present,” he explained.

During his homily, Bishop Bambera also shared the personal story of his grandmother who refused the advice of doctors to have an abortion after becoming sick during the pregnancy of her sixth child in the 1920s.

The bishop recounted the words that his grandmother said, words the bishop said have always spoken powerfully to him about life, faith, trust and God: “Any mother would give her life for her child. How can I chose who lives and who dies. I’ll leave that choice to God.”

While her baby was born healthy, the bishop’s grandmother continued to get sicker following childbirth. She died one month later.

“If we have learned nothing else during the past two years in which we have had to confront the deadly coronavirus pandemic, I hope we have come to appreciate the value of human life as never before. I hope we’ve also come to understand that so much of life is beyond our ability to control and, on our own, we are helpless to address the challenges that confront us,” the bishop added. “Only by handing ourselves over to the power of God – by trusting in his wisdom, grace and mercy – and only by working together to care for the lives that have been given to us will we ever discover a way forward filled with peace and hope for all.”

The bishop ended his homily by thanking those in attendance for their witness to the sanctity of human life – God’s greatest gift to the world.

“On this day in which we recall a tragic moment in our history that legalized the taking of innocent, unborn lives, may we resolve through our prayers and actions to set aside the divisive behavior that has plagued us as a people, a nation and a Church. In so doing, may we begin to carve a way forward together first as brothers and sisters who believe in and treat every human being with equality and reverence, from the moment of conception in the womb until God, in his providence, takes us home at the end of our journey of life,” Bishop Bambera said. 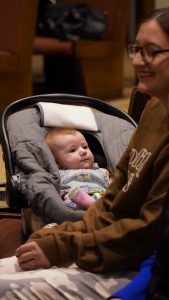