The Most Reverend John M. Dougherty, Auxiliary Bishop Emeritus of Scranton, dies at 89

The funeral arrangements for the Most Reverend John M. Dougherty, Auxiliary Bishop Emeritus of the Diocese of Scranton, who died on Saturday, April 16, 2022, have been finalized.

Both the Vespers Service and Funeral Mass are open to the public. Both services will be televised on CTV: Catholic Television of the Diocese of Scranton for those unable to attend in-person.

Interment will be in Cathedral Cemetery, Scranton. 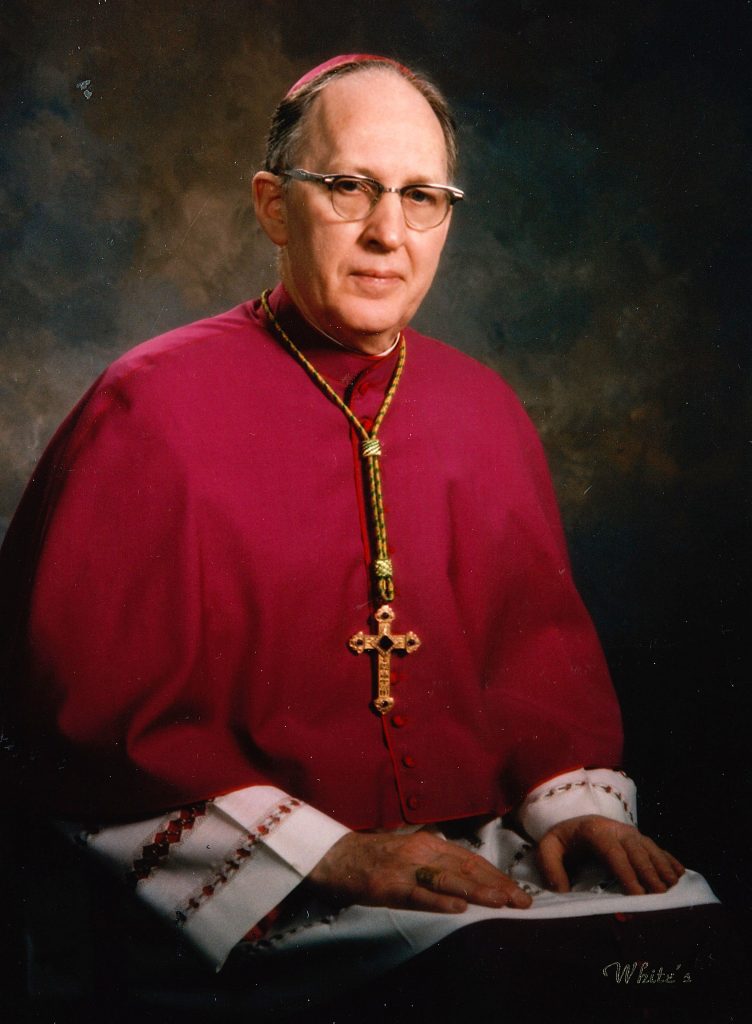 The Most Reverend John M. Dougherty, D.D., Auxiliary Bishop Emeritus of the Diocese of Scranton, died on Saturday, April 16, 2022, at his family’s home in Scranton. He was 89.

Bishop Dougherty provided 65 years of faithful service to the people of the Diocese of Scranton, including 27 years as a bishop. He will be remembered for his wisdom, pastoral concern, deep spirituality, and consistent presence in hospitals and nursing homes ministering to the sick and dying.

He was born April 29, 1932, in Scranton, the son of the late Edward A. and Irene C. Kern Dougherty. A member of St. Paul’s Parish, Scranton, he attended the parochial grade school and graduated from St. Paul’s High School in June 1949. In September of the same year, Bishop Dougherty entered St. Charles College, Catonsville, Md., where he studied for two years.

Bishop Dougherty was ordained to the priesthood on June 15, 1957, in the Cathedral of Saint Peter, Scranton, by the Most Reverend Jerome D. Hannan, late Bishop of Scranton.

On June 29, 1957, Bishop Dougherty was appointed assistant pastor of St. Ann Parish, Tobyhanna, a community he served for more than seven years. In preparation for the opening of St. Pius X Seminary, Dalton, he was named Professor of Ascetical Theology by Bishop Hannan on March 28, 1962.

Bishop Dougherty was given additional responsibility in September 1964, which brought him to his first post in the Chancery. He was appointed Director of the Society for the Propagation of the Faith.

On May 19, 1968, Pope Paul VI named Bishop Dougherty a Chaplain of His Holiness with the title of Monsignor. In the same year, he was appointed Vicar for Religious by Bishop J. Carroll McCormick. Four years later, he was appointed Assistant Chancellor of the Diocese and he assumed the duties of the Diocesan Pro-Life Director in February 1976.

On September 6, 1977, Bishop Dougherty was appointed Chancellor of the Diocese of Scranton and Pro-Synodal Examiner.

He was named a Prelate of Honor on November 2, 1978, by Pope John Paul II. On June 7, 1984, the day of Bishop James C. Timlin’s installation as the Eighth Bishop of Scranton, Bishop Dougherty was appointed Vicar General, Moderator of the Curia and Diocesan Consultor.

Pope John Paul II named Bishop Dougherty the Titular Bishop of Sufetula and Auxiliary to the Bishop of Scranton on February 7, 1995. His episcopal ordination took place on March 7, 1995, in the Cathedral of Saint Peter, Scranton, with Bishop Timlin serving as consecrator.

On June 30, 1995, Bishop Dougherty was appointed Rector of Villa St. Joseph, Dunmore, a position he held for nearly nine years. On March 1, 2004, Bishop Joseph F. Martino gave him significant additional collaborative responsibility in the daily administration of the Diocese by naming him Vicar for Administration, a newly created central administrative post.

Bishop Dougherty continued his service to the Diocese through appointments on the Council of Priests and Board of Consultors between 2005 and 2010. The Holy See accepted his resignation on August 31, 2009, two years after reaching the mandatory retirement age.

Even after retirement, as Auxiliary Bishop Emeritus, Bishop Dougherty served in residence at Christ the King Parish in Archbald prior to Bishop Joseph C. Bambera appointing him to serve as Administrator, pro tem, at Sacred Hearts of Jesus and Mary Parish, Jermyn, in June 2019.

Bishop Dougherty was also a member of the American Catholic Historical Association and was elected by Catholic Distance University in Hamilton, Va., to serve on its board of trustees.

Interment will be in Cathedral Cemetery, Scranton.

To send an online condolence, visit https://www.dioceseofscranton.org/obituaries/most-rev-john-m-dougherty/ or the Diocese’s Facebook page.

Statement of the Most Reverend Joseph C. Bambera on the Passing of
Bishop John M. Dougherty, D.D., Auxiliary Bishop Emeritus of the Diocese of Scranton

“Bishop Dougherty’s passing brings to a close a rare example of priestly ministry and service so generously shared for 65 years as a priest and 27 years as a bishop. While Bishop Dougherty’s retirement was accepted a year before my appointment as Bishop of Scranton, his willingness to continue to be of service to the faithful of our Diocese never diminished throughout his almost 90 years.

“Bishop Dougherty will be remembered as a thoughtful, quiet presence in the administrative mission of the Diocese of Scranton, having tirelessly served my four predecessors as Chancellor, Vicar General and Auxiliary Bishop. His greatest legacy to this local Church, however, won’t be as a leader in the spotlight but as a pastor – a servant in the shadows – visiting hospitals in the middle of the night, feeding the poor, sharing the sacraments and offering hope to broken souls who looked to him for help.

“Until his final days of life, even while challenged with diminishing health, Bishop Dougherty never shrank for a moment from his priestly ministry to the People of God, regardless of the situation or circumstance. His deep respect for both the leadership of the Church and for every baptized soul was evident in his words, his demeanor and in his willingness to assume any position of service with humility and grace.

“Bishop Dougherty was one of a kind, with an unexpected dry wit that could fill your heart with laughter in an instant and a selflessness that made the greatest to the least feel at home in his presence.

“Above all else, Bishop Dougherty was a good and faithful priest who served God and the people given to his care with every fiber of his being. May God give him the rest and peace that he so richly deserves.”