Sunday is World Day for Grandparents and the Elderly 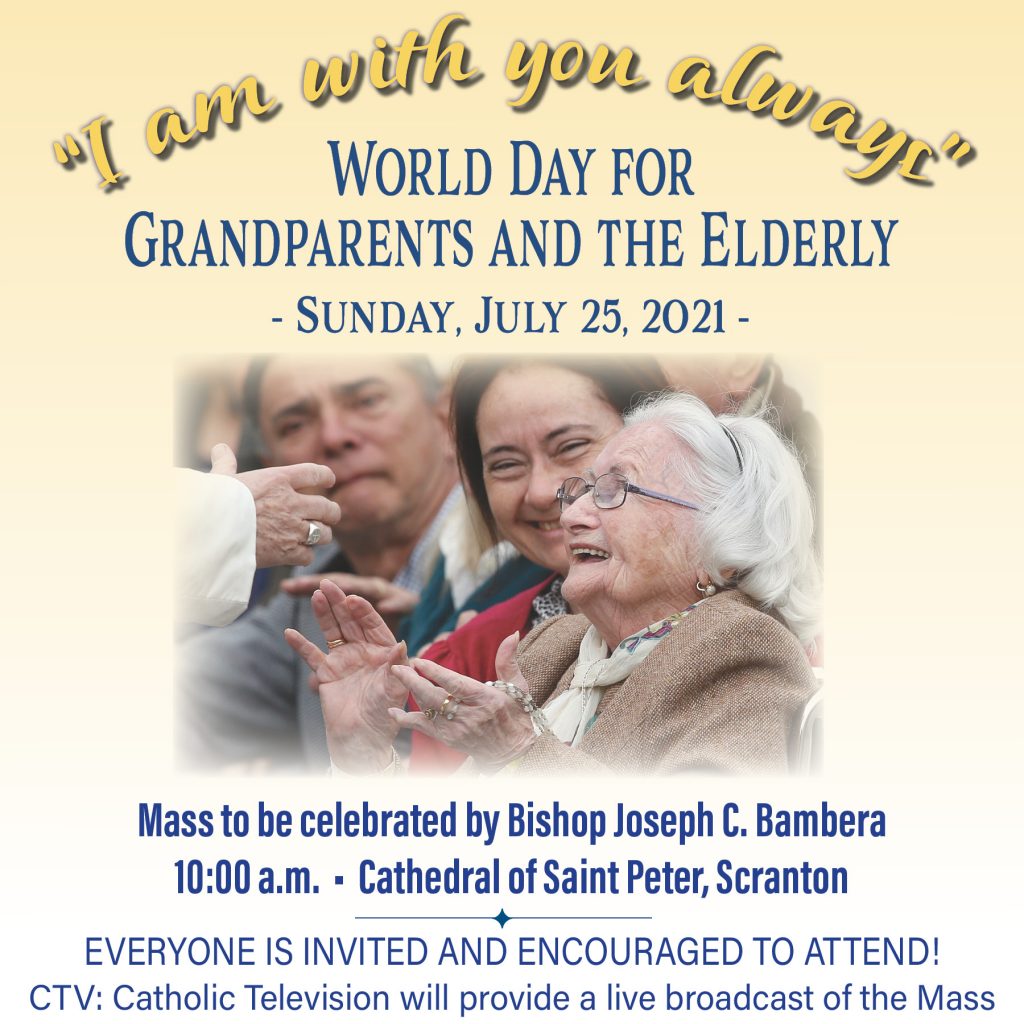 Pope Francis has announced the first World Day for Grandparents and the Elderly will be celebrated on Sunday, July 25, 2021.

All parishes in the Diocese of Scranton have been encouraged to dedicate one Sunday Mass to grandparents and the elderly in advance of the liturgical memorial of Ss. Joachim and Ann on July 26.

The pope has chosen the theme, “I am with you always” (cf. Mt. 28:20) for this inaugural celebration.

The Most Reverend Joseph C. Bambera, Bishop of Scranton, invites the faithful of the Diocese of Scranton to join him in celebrating Mass for the World Day for Grandparents and the Elderly at 10:00 a.m. at the Cathedral of Saint Peter in Scranton on Sunday, July 25.

The Mass will also be broadcast live on CTV: Catholic Television of the Diocese of Scranton with a livestream made available on all Diocesan social media platforms.

Pope Francis also recently released a special message for the first World Day for Grandparents and the Elderly. That message can be found at the end of this story.

Writing to his peers, Catholics who have reached a venerable age like he has, Pope Francis told older Catholics that God is close to them and still has plans for their lives.

“I was called to become the bishop of Rome when I had reached, so to speak, retirement age, and thought I would not be doing anything new,” said the pope, who is 84 now and was elected when he was 76.

“The Lord is always – always – close to us. He is close to us with new possibilities, new ideas, new consolations, but always close to us. You know that the Lord is eternal; he never, ever goes into retirement,” the pope wrote in his message.

The Vatican also announced that people who attend a Mass or other celebration for the day, “devote adequate time to actually or virtually visiting their elderly brothers and sisters in need or in difficulty” or join in prayers for the elderly July 25 can receive a plenary indulgence as long as they fulfill the usual requirements of also going to confession, receiving the Eucharist and praying for the intentions of the pope.

The indulgence also is available to “the elderly sick and all those who, unable to leave their homes for a serious reason, will unite themselves spiritually to the sacred functions of the world day, offering to the merciful God their prayers, pains or sufferings of their lives,” the Vatican said.

Pope Francis’ message, which was distributed in writing in eight languages and on video, acknowledged how many older people around the world suffered and continue to suffer physically, emotionally and spiritually because of the COVID-19 pandemic.

But he also insisted that the Christian call to share the Gospel is as pertinent now for all of them as it ever was.

“Think about it: what is our vocation today, at our age? To preserve our roots, to pass on the faith to the young and to care for the little ones,” he wrote. “Never forget this.”

“It makes no difference how old you are, whether you still work or not, whether you are alone or have a family, whether you became a grandmother or grandfather at a young age or later, whether you are still independent or need assistance,” he said. “There is no retirement age from the work of proclaiming the Gospel and handing down traditions to your grandchildren. You just need to set out and undertake something new.”

The cardinal, prefect of the Dicastery for Laity, the Family and Life, encourages younger people to take an action of tenderness on July 25: Visit your grandparents or any older person living alone, offer them a ride to Mass, take them a flower or even potentially take them the Eucharist.

“Tenderness is not just a private feeling, one that soothes wounds, but is a way of relating to others, which should also be experienced in public,” Cardinal Farrell said. “We have become accustomed to living alone, to not hugging each other, to considering the other as a threat to our health. Our societies, the pope tells us in ‘Fratelli Tutti,’ are now fragmented.”

“Tenderness has a social value,” the cardinal insisted.

POPE FRANCIS’ MESSAGE FOR WORLD DAY FOR GRANDPARENTS AND THE ELDERLY

PRAYER FOR THE FIRST WORLD DAY FOR GRANDPARENTS AND THE ELDERLY