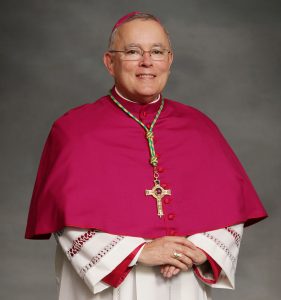 The Most Reverend Charles J. Chaput, O.F.M. Cap., D.D., Archbishop of Philadelphia and Metropolitan of the ecclesiastical province of Pennsylvania, made his first visit to the Diocese of Scranton when he serves as principal celebrant of the Pontifical Mass marking the actual 150th Anniversary Sunday of the founding of the Diocese. The liturgy will be celebrated on Sunday, March 4, 2018, at 3 p.m. in the Cathedral of Saint Peter in Scranton.

“It fills me with great joy to be the principal celebrant for this Mass as part of the commemoration of the 150thAnniversary of the Diocese of Scranton,” Archbishop Chaput said. “Philadelphia and Scranton have shared a special bond beginning with the early days of the Church in Northeastern Pennsylvania. Since the time of missionary parishes served by traveling Philadelphia bishops and priests, to the establishment of Scranton as its own diocese in 1868, to the present day, we are inextricably linked as part of God’s family.

“I send my prayerful best wishes to the bishop, priests, deacons and lay faithful of the Diocese of Scranton on the occasion of your sesquicentennial. May God bless you abundantly for many years to come.”

Archbishop Chaput, a Kansas native, joined the Order of Friars Minor Capuchin, Saint Augustine Province, in 1965. He was ordained to the priesthood on August 29, 1970.

Archbishop Chaput was ordained Bishop of Rapid City, South Dakota, on July 26, 1988. Pope John Paul II appointed him Archbishop of Denver on February 18, 1997, and he was installed on April 7 the same year. As a member of the Prairie Band Potawatomi Tribe, Archbishop Chaput was the second Native American to be ordained a bishop in the United States and the first Native American archbishop.

In 1999, building on the efforts of his predecessor in Denver, Archbishop Chaput founded St. John Vianney Theological Seminary, an affiliate of the Pontifical Lateran University.

In 2002, assisted by his Auxiliary Bishop José Gomez, Archbishop Chaput founded Centro San Juan Diego in response to the pastoral and educational needs of the growing Hispanic community in Colorado. He later co-founded the national Catholic Association of Latino Leaders (CALL) and helped in the founding of ENDOW, a leadership initiative of Catholic women to “Educate on the Nature and Dignity of Women.” He was also instrumental in creating the Denver-based Augustine Institute, an independent, lay-run graduate school for the formation of lay Catholic leaders, catechists, and evangelizers.

Archbishop Chaput served on the U.S. Commission on International Religious Freedom, 2003-2006. In 2005, he was named a member of the official U.S. delegation to Cordoba, Spain, for the “Conference on Anti-Semitism and Other Forms of Intolerance,” sponsored by the Organization for Security and Cooperation in Europe (OSCE). The national Becket Fund for Religious Liberty awarded him the 2009 Canterbury Medal for his work in advancing religious freedom.

Archbishop Chaput served on the Board of Directors for The Catholic University of America, Washington, D.C. (1994 – 2009) and the National Catholic Bioethics Center (1993 – 2006). He serves on the board of directors for Eternal Word Television Network, Birmingham, Alabama (1996 – present); The Catholic Foundation of Northern Colorado (1998 – 2011); St. John Vianney Theological Seminary in Northern Colorado (1999 – 2011); Redemptorists Mater Seminary in Northern Colorado (1998 – 2011); The Fellowship of Catholic University Students (2001 – present); Catholic Association of Latino Leaders (2007 – present); World Youth Alliance International (2010 – present). As Archbishop of Philadelphia, he serves as the ex-officio Chairman of the Board of Trustees of Saint Charles Borromeo Seminary.

Archbishop Chaput served the Holy See as an Apostolic Visitor to U.S. seminaries, (2005 – 2006); the Diocese of Toowoomba, Australia, (2007); and the Legion of Christ for Canada and the United States, (2009 – 2010). In February 2014 he was appointed to the Pontifical Council for the Laity by Pope Francis. In 2015, he hosted the World Meeting of Families and visit of Pope Francis to Philadelphia. He participated in the 2015 Synod of Bishops on the Family in Rome and was named a permanent member of the council for that synod.

The Mass on March 4 celebrates the formal establishment of the Diocese of Scranton by Pope Pius IX on March 3, 1868.

The Cathedral will be filled to capacity for the Mass. Those attending will include clergy, religious, and lay representatives of various Diocesan institutions, agencies, and councils; delegates from the 120 parishes, and representatives from Diocesan Catholic schools.

At all Masses on this weekend, all parishes in the Diocese and every Catholic are encouraged to acknowledge the anniversary and offer their prayers of thanksgiving. Liturgical guides and other resources have been provided to parishes by the Office for Parish Life.

The Mass will be available to all for viewing on the live broadcast by CTV: Catholic Television, live streaming on the internet, and later on the website: www.www.dioceseofscranton.org.

This special liturgy is part of a year-long Sesquicentennial Celebration that began on the First Sunday of Advent, December 3, 2017, with a Pontifical Mass in the Cathedral celebrated by Bishop Bambera. Justin Cardinal Rigali, Archbishop Emeritus of Philadelphia and former Apostolic Administrator of the Diocese of Scranton, presided.

Numerous annually occurring and specially focused events throughout the year are spotlighting our Anniversary and the history of our Diocese. Among them is a Diocesan Day of Service being planned for March 3, and a Jubilee Year Pilgrimage to the Basilica of the National Shrine of the Immaculate Conception in Washington, D.C., on September 22.

The Catholic Light continues its periodic series of special center sections focusing on various aspects of Diocesan history. This issue focuses on Ecumenical and Interfaith Relations. Special segments are also airing on the CTV program “Our Faith, Our Diocese.” An Anniversary Year page has been posted on the Diocesan website at www.www.dioceseofscranton.org, and WVIA-TV is producing a documentary that will air in March.

The celebration will close with the Anniversary Year Concluding Mass on November 25, 2018, the feast of Christ the King, at the Cathedral. The Most Reverend Christophe Pierre, Apostolic Nuncio to the United States, will be the principal celebrant.

‘There Is One Body and One Spirit’