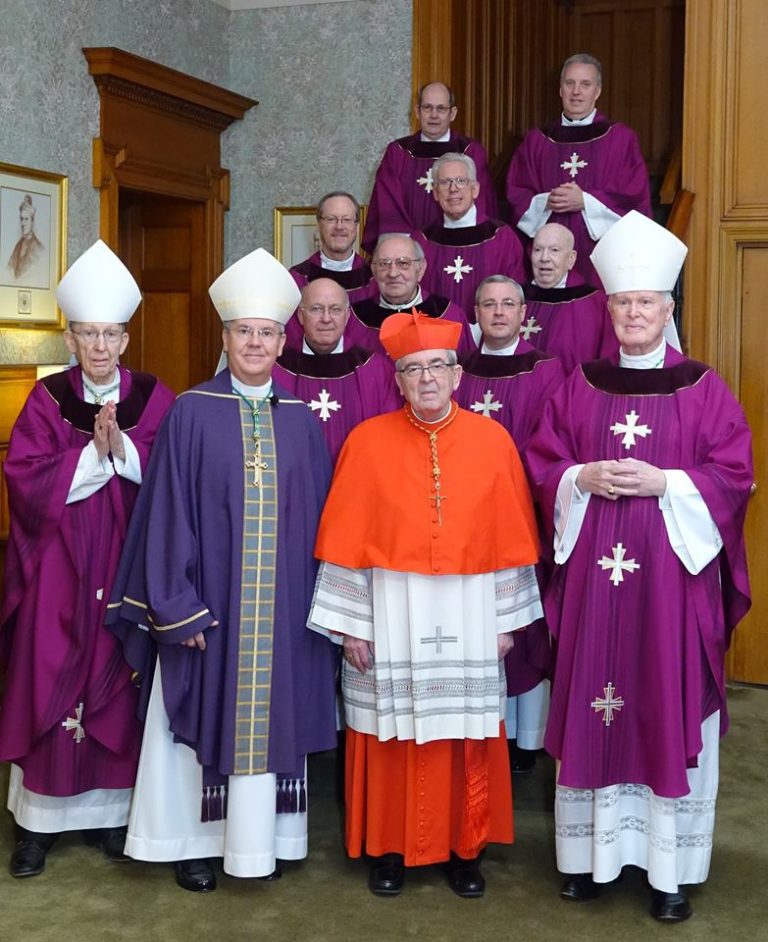 With prayer, gratitude, and joy in their hearts, the People of God in this local church of Northeastern and Northcentral Pennsylvania began a year-long celebration of the formation of their Diocese 150 years ago.

Worshippers from throughout the 11-county Diocese of Scranton – including delegates from the 120 parishes, representatives from the Diocesan Catholic schools, church officials and viewers of CTV: Catholic Television – gathered for the opening Mass on the First Sunday of Advent, December 3, in the Cathedral of Saint Peter in Scranton.

Bishop Joseph C. Bambera was the principal celebrant and homilist, with priests of the Diocese concelebrating. His Eminence, Justin Cardinal Rigali, Archbishop Emeritus of Philadelphia and former Apostolic Administrator of the Diocese of Scranton, presided.

Cardinal Rigali expressed his gratitude for the opportunity to participate, thanking Bishop Bambera, “and all of you, dear brothers and sisters, who make up this wonderful, this beautiful, this important Church of Scranton.”

In order to grasp the significance of the Sesquicentennial, the Cardinal noted, we must look back to the presence of Jesus, “the presence of Jesus in this community in a very strong and vibrant way, His presence for a hundred and fifty years, and you and your predecessors in this Diocese have been walking, together, with the Lord Jesus for all these years.”

Cardinal Rigali also offered his “special reasons to rejoice with you and to be with you,” noting that the territory of the Diocese of Scranton was part of the Archdiocese of Philadelphia until it was detached and made its own Diocese by Pope Pius IX in 1868. Cardinal Rigali was Archbishop of Philadelphia for eight years. And for eight months in 2009 and 2010 was the Apostolic Administrator of the Diocese of Scranton until Bishop Bambera, who served as his Delegate, was named Bishop.

“I was able, during those months, to be here, to be in the parishes, to be with you on sixteen different occasions, and it was a great grace in my life,” the Cardinal said. “It was likewise my privilege then to be able to ordain Bishop Bambera to the Episcopacy, and to be with all of you in this new moment in the history of this local church, and all of these (experiences) link me with you, actually for as long as I live. I am so honored to be part of your history. I am so honored to be part of your life with Jesus, and today I am honored to walk with you to begin the walk into the future.

“This Anniversary is a new beginning, a new walking together with Jesus. And so with Jesus we also render thanks to his heavenly Father for this gift – a hundred and fifty years has gone by. Now the future opens up, we walk with Jesus in confidence and love and joy and in peace; we walk with Him to the Father in the unity of the Holy Spirit.”

On behalf of the clergy, religious and laity of the Diocese, Bishop Bambera told Cardinal Rigali that “we are truly blessed to have you with us today to commemorate this historic moment in the life of our Diocese and to welcome you ‘home’ to a Church that you served so well – even if for a brief period of time.”

Citing the baptismal call of each one of us to build the Church, Bishop Bambera noted that the early settlers in the Diocese knew implicitly that if the faith that they had come to cherish was ever to flourish in this region of our young country, they would be the ones responsible for carrying out the Church’s mission in Northeastern and Northcentral Pennsylvania.

“Much can and should be said about the selfless service of the clergy and religious who laid a solid foundation of faith for this blessed local Church of Scranton,” the Bishop said. “Yet, no matter how heroic or selfless, each of them was only able to fulfill the work entrusted to their care because of the commitment of the faithful souls they served – souls who had been touched by the mercy and love of God and who realized that they too – in their own way – were responsible for proclaiming the good news of the Gospel.

“My friends, those faithful souls are like all of you, who understand that even and particularly today, it is your responsibility – just as much as it is mine – to build the Church, the body of Christ – and to be His hands and voice and heart to a world so much in need of God’s grace.”

Bishop Bambera acknowledged that the number of parishes has diminished in recent years due to changing demographics and cultural challenges, but he asserted that “thankfully, this portion of God’s kingdom that all of you represent so beautifully continues to vibrantly embrace the mission of the Church entrusted to all of the baptized.

“My sisters and brothers, may this blessed anniversary year of celebration and remembrance serve as a time of renewal for each of us who are called to make the mission of Jesus our own. Just like the first missionaries who traveled to our eleven counties in times that were different, but just as challenging as our own, we too have the responsibility to build Church. And, like them, we would do well to remember that if anything profound is to happen through us, it will only happen in relationship with Jesus.”

Referring to the liturgy’s Gospel passage, the Bishop urged us to “‘be watchful! Be alert!’ Continue to look for opportunities to serve the Lord Jesus – in those who have lost their way – in the poor – the suffering – the marginalized – and the brokenhearted. Work for justice. Forgive generously. Give Jesus room to mold our lives into the pattern of his own. Continue to be the leaven of the Gospel in our corner of the world. And give thanks – for all that has been and for all that will be in this local Church through the grace and presence of God in our midst.”

Coinciding with the Mass at the Cathedral, all parishes in the Diocese were encouraged to acknowledge the 150th Anniversary Year at their weekend liturgies. Each parish has received a parish participation kit, with suggestions and resources for celebrating the more local aspects of the Sesquicentennial, which will continue through most of 2018 under the theme, “The Journey Makes Us One.”

A Pontifical Mass at the Cathedral of Saint Peter was celebrated on the actual Anniversary Sunday of the founding of the Diocese of Scranton on March 4, 2018, with the Most Reverend Charles J. Chaput, O.F.M. Cap., Archbishop of Philadelphia, as celebrant. Then to close the Anniversary Year, the Most Reverend Christophe Pierre, Apostolic Nuncio to the United States, will be the principal celebrant at the Anniversary Year Concluding Mass on November 25, 2018, the feast of Christ the King, at the Cathedral. Representatives from the parishes will be invited for each of these significant celebrations.

In addition to these liturgical events, there will be numerous annually occurring and specially focused events throughout the year that will be spotlighting our Anniversary Year and the history of our Diocese. Among them is a Jubilee Year Pilgrimage to the Basilica of the National Shrine of the Immaculate Conception in Washington, D.C. on September 22.

Diocesan media will continue to highlight the Sesquicentennial throughout the year.

A special Mass at Saint Peter’s celebrated the dedication of the plaque, which is on permanent display in the Holy Family Shrine off the Cathedral vestibule. The homilist for the liturgy was Father Peyton’s nephew, the late Monsignor John P. Gallagher, former historian for the Diocese of Scranton who followed in his famous uncle’s priestly footsteps.

Monsignor Gallagher’s mother was the former Beatrice Peyton, who first journeyed from Ireland to Scranton with another sister before the arrival of their two future priest-brothers, Thomas and Patrick.

Not far from the front doors of Saint Peter’s, a large bronze statue of Father Peyton kneeling in prayer along with an inscription of his enduring “family prayer” motto, sits fittingly among the Rosary walk kiosks in the Cathedral Prayer Garden, constructed in 2003 to celebrate the 150th anniversary of Saint Peter Cathedral Parish.

After the pope’s decree recognizing Father Peyton’s heroic virtues, in general, a miracle is needed for his beatification and a second one for his canonization.